Matt Kenseth took advantage of Kevin Harvick’s empty fuel tank Sunday and won the Sylvania 300 at New Hampshire Motor Speedway on Sunday. Matt Kenseth sniped his second fuel-mileage win in 2015 and punched his ticket to the second round of the Chase.Kenseth wasn’t in fuel conservation mode over the final laps of the race. Harvick dominated much of the day, leading 216 of the 300 laps, but slowed with just two laps remaining after trying to stretch fuel mileage through a wild end to the event.

Denny Hamlin, last week’s winner and another driver who is also guaranteed a spot in the second round of the playoffs, finished second. Joey Logano was third and non-Chase driver Greg Biffle finished fourth.Brad Keselwoski featured at the front of the pack for the opening 250 laps, but picked up a penalty for a restart violation that dropped him to the back of the lead lap.Carl Edwards, the polesitter, was black flagged for running over equipment on pit road. Johnson cut a left front tire with 100 laps left and plummeted from third to 30th.

It’s a pretty basic understanding, it’s an entertainment sport and not a fair sport,” Keselowski said when asked by NBC of his understanding of the restart call. “We had a great car, the team on the No. 2 … was really strong. I don’t know if we would have beat [Kenseth] and [Denny Hamlin] it looked like they probably had four tires but like I said, heck of a rebound. Really proud of my guys today.”

Busch was the first Chase driver to suffer serious damage when his right front tire blew and he hit the wall. Busch, who the July race in New Hampshire, took the No. 18 straight to the garage. The other two out of the Chase for now: Paul Menard and Bowyer. NASCAR will hear an appeal of Bowyer’s penalty this week, but only a victory will get him into the 12-man field. With 98 laps to go, Danica Patrick was spun out when Ryan Newman nudged into her left rear while racing Jeff Gordon on a restart.

As Patrick came back down the track, she was nailed by David Ragan and the contact sent her spinning around.Ragan tore the entire right side off his car,it sent safety foam flying and exposing it down to the chassis bars. 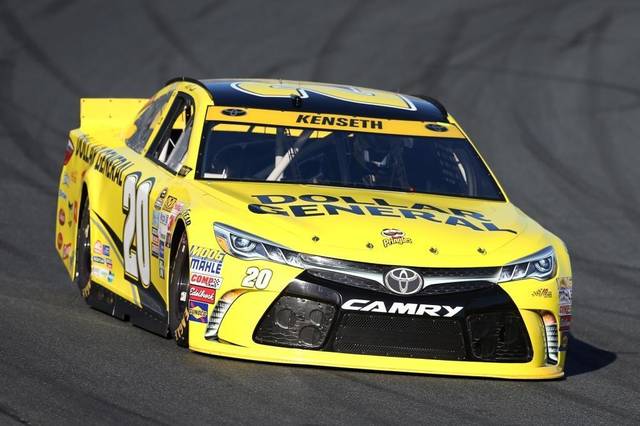