The Colorado Rockies won again on Tuesday night, and Charlie Blackmon recorded three more hits. His batting average is now at .484 which is the best start since Barry Bonds hit .525 through the first 16 games in 2004. The last time a batter hit .400 was Ted Williams in 1941. He hit .406 while playing in 143 games. Nolan Arenado recorded two RBI’s, with a two-run homer in the 4th inning. That home run drove in Charlie Blackmon.

The Toronto Blue Jays played their first home game today and won it. They have had to play in Buffalo which is in a different country than Toronto where they usually play. They have been forced to play in Buffalo because the virus is so bad in America that Canada does not want them playing in America and coming back and hosting games in Canada. Buffalo is a minor league stadium, so teams might not be too happy about playing there. Although only 10 teams max will have to play there over the course of this 60 game season.

The Mets fall to 7-11 with another loss to the Nationals. The night after Luis Guillorme pitches, he helps turn two double plays with youngster Andres Gimenez. Gimenez has shown he has the tools to be a solid big-league player, He has already stolen three bases, is batting over .300 and has been a terrific fielder. Mets fans are raving about this kid and it is fairly easy to see why. He hit his second triple of the season on Wednesday. He does not have tremendous power but he can develop that as he gets older.

The Mets have been going with a defensively strong lineup when Rick Porcello is on the mound because of how many ground balls he produces. So the infield they have been using is J.D. Davis at third, he has really proved himself defensively in the past five games. Luis Guillorme and Andres Gimenez at second and shortstop and Dom Smith at first. Dominic Smith was playing first base to give Pete Alonso his first night of the season without starting. He did, however, pinch-hit for Billy Hamilton and relieve Smith of the first base duties.

Aaron Judge hit his 9th home run of the season tonight, to lead the Yankees past the Braves with a final score of 9-6. Luke Voit also hit a home run tonight. Aaron Judge was removed in the 6th inning, but to the excitement of Yankees fans, it was not an injury it was just for rest. Manager Aaron Boone says he wanted him to rest since they were already leading 8-0.

Fernando Tatis Jr. showed off his glove tonight with a nice diving catch at third. He has been playing at extraordinary levels. He was leading the league in homers until earlier tonight, and he is still leading the league in 18 RBI’s. He also has a .333 average which is amazing, and crazy that it falls to 7th best in the league. He is playing above expectations during only his second year in the big leagues. He shows no signs of slowing down. So he might not hit a sophomore slump in this 60 game season. 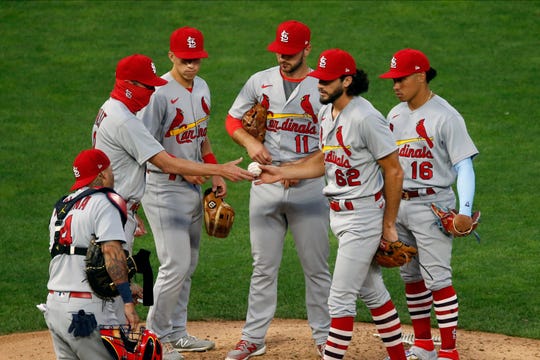