In the NFL, if you don’t bring heat, modern Quarterbacks will spatchcock your Defence with extra glaze. As good as your Secondary and lock-down Corners may be collectively, if given more than 3 seconds (literally) or a slither of daylight, QB1 will convert and/or score.

Conventional thinking leads teams to pay highly and game-plan aggressively with their Edge Rushers. These are the guys who earn the big money contracts, garner the prestige and generally enjoy the trappings of high Sack totals – the coolest metric in Football.

That said, Football is a team game and, as a Striker in Soccer takes the glory of goals resulting from a great “through ball”, Edge Rushers must thank the interior beefcakes for flushing out the QB. In a foot race the QB wins 9 out of 10. Line pressure is a group effort.

Again Superbowl LV provided a spotlight on how an elite front 4 can win games. Kansas’s Tackles allowed Barrett and Pierre-Paul to make Mahomes flee like a spooked rabbit, but his escape routes were clogged up by the dominant, relentless mountains of Vea and Suh.

In your breakdown today we look at the interior wrestling giants who prevent Running Backs from breathing and cause maximum stress for even the most experienced of field generals. AFC East Interior Defensive Linemen: depth charts, Cap hits and Rookie potential scale.

The Bills Beefcakes are headlined by 2019 first round pick (9th overall) Ed Oliver. His first 2 Pro Seasons have been solid and effective but one suspects there is plenty more under the hood of this particular truck. 5 Sacks, 43 tackles, 5 TFLs and 8 QB hits in his Rookie season followed by a 3 Sacks and 6 QB hits season in 2020.

He has the pedigree, athleticism and character to blossom in year 3. Any kind of bond with Rousseau and Basham could create a fearsome foursome in the next few years.

Butler and Lotulelei make up the majority of the rest of the interior snaps. These guys are brobdingnagian in presence, forcing many a Running Back to think twice about their lane. Their box stats under-value the nature of force and steel they bring to the interior. With Oliver it’s easy to understand why this position wasn’t added to (so far) during the off-season.

Zimmer is the only other Interior guy with more than 20% of the snaps in 2020. It wouldn’t do the Bills wrong to look for some value free agent experience as depth come “cut down” days in September.

Wilkins is Miami’s poster child for their Defensive rebuild. Grier and Flores first pick of the “new era”, Wilkins is a high energy, “all for one and one for all” type leader. When Miami scores a touchdown you’ll see Wilkins scampering the length of the sideline to join the celebrations. Stoical evaluators may consider him a bust, Miami loves him.

Two of the brightest spots in Miami’s 2020 campaign came across the interior line. Zach Sieler, a 7th round pick by Baltimore in 2018 was poached off waivers by Miami during Christmas 2019. Within a year his presence, motor and development had him signing a 3 year extension with the Fins and being a key member of their Dline alliance. It also got him out of his motorhome.

Raekwon Davis came in as a Rookie from Alabama in the 2nd Round (pick 56). His Draft stock had shrunk significantly over the course of the 2020 College campaign as his box numbers didn’t match people’s expectations. Flores disagreed and his elation when Miami turned their card in was a classic memory for Dolphans.

Davis is an iceberg at 6ft 7inches and 330lbs, with a menace to match. After the understandable adjustment period, Davis took control in the second half of the season turning into an immovable force and setting out his stall as Miami’s Nose Tackle for the next decade. Any form of second year jump could see Davis become a household name, he has a ceiling beyond the gaze of telescopes.

Wilkins, Sieler and Davis will all take 60% of the snaps (Wilkins will probably beg Coach for a couple of Fullback snaps too) so Adam Butler coming over from New England makes a dominant interior group. Butler will slot in as a savvy, veteran, effective complimentary piece. In the Godchaux, Butler swap (not directly) I feel Miami got the tougher player.

Jerome Johnson is a fair pickup in the UDFA frenzy. A more athletic, speed interior guy he has a workmanlike career with Indiana playing 39 games over 4 years with 65 tackles, 13.5 Sacks and an interception. As the cliche goes “the best ability is availability”, Johnson with his different skill type should compete with veteran Jenkins, Jones and Coe.

New England’s 2021 Draft pick  Barmore is so New England you could smell the Lobster as the card was turned in. Belichick gave up 3 picks (to Cincy) to climb the board and secure Alabama’s do it all lineman.

There’s a type and a system that Belichick created and continues to ply. Who’s to argue. Barmore is big, explosive and versatile. With Saban’s reference he should mature quickly into a 3 (increasingly 4 these days) Down lineman.

As I mentioned in the Dolphins section I rate Butler as a better player than Godchaux. Godchaux never really managed to elevate his play and once an injury took him off the field long term, his ability wasn’t likely to help him back in his all important contract year.

Cowart is the only other member of this group that got significant snaps last year. Barmore will play, Godchaux will play. Belichick will unleash fancy fronts and obscure looks with Van Noy and Hightower back. Not to mention Uche who we’ll look at in the Linebacker section.

Over in New Jersey the Jets are wielding the best Defensive Tackle in the East and surely a top 10 league wide. Williams’ early NFL career hasn’t been smooth sailing, in keeping with the character arc of the Jets generally, but it has been productive.

Playing in 13 games in both his Pro years after being Drafted 3rd overall in 2019. Williams dominated on a poor Defence last year with 7.5 Sacks, 2 FFs, 14 QB hits and 10 TFLs. This young man should grow into a Hall of Fame calibre talent if he matures and takes to a more professional Culture laid out by the Douglas/Saleh regime.

Rankin’s and Fatukasi should be solid 50% Snap players with Rankin bringing experience from one of the NFL’s top Defensive units and rosters generally. Depth behind these 3 is where things get rough for Saleh. It’s like staring into the “infinite abyss” with Andrew, Sam and Mark (Garden State).

Michael Dwumfour is the only Rookie addition via the UDFA frenzy. He’s a little undersized and his 4 years at Michigan and 1 at Rutgers weren’t by any means proliferant. It’s an area ripe for improvement when roster cut downs take place in early September. There will be a lot of solid Veteran Linemen happy to come and compete on Saleh’s Defense.

The Bills will expect Oliver to start dominating this year. He has quality Veterans at Edge with high ceiling Rookies vying for Snaps, one of the best LB duos in the league behind him and a quality secondary. If he asserts himself, Buffalo will be favourite to match KC in the Championship this year. Looking at Beane’s (GM) moves the last 3 years, Oliver can expect more competition for his job next off-season.

Miami should be really content with their mix of four. As an average I feel it’s the best of the East’s Defensive Interior units, if any of them breakout individually it’s going to be a tough season for Guards and Centres playing the Dolphins. Davis is a serious “one to watch”.

New England will turn out pressure as a team that’s whole exceeds the sum of its parts. As sure as leaves will fall in Autumn, Bill will bring pressure from places Quarterbacks didn’t know existed. Barmore is a high ceiling talent who should make an impact as the season wears on. Patriots style.

The Jets have quality in most position rooms. It’s the depth they lack. Williams is no exception. He’s arguably the best player they have and a top 10 talent. With the Veteran presence of CJ Mosely returning behind him, Jets fans can reasonably expect some quality highlight reels of him crushing Running Backs while gobbling up multiple blockers. It’s not a bad place to start.

Later in the week we’ll take a look at the Interior Offensive Linemen charged with corralling these maddening Bulls. Join me @CJEphgrave on Twitter & Instagram. 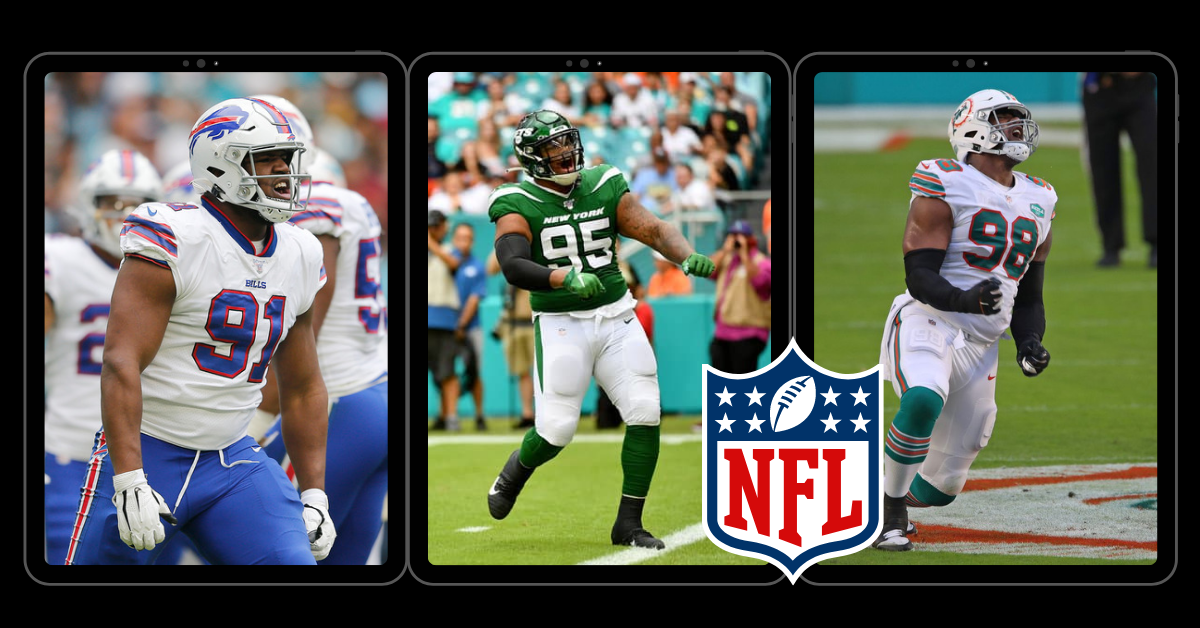