NFL draft 2021 is set to kick-off tonight at 8 pm, est. This year features a ton of talent and what many experts are calling one of the best quarterback classes in a while. Offensive players should dominate the first round, with some believing this NFL draft might not have a defensive player taken in the top 10.

One thing is for sure: after an off-season of major free agent signings and front office changes, we are ready for NFL draft 2021. Here’s a quick glance at what I predict might happen in the first round of the NFL draft 2021.

If you’re not predicting that the Jags are taking Trevor Lawrence first overall in NFL draft 2021 then you’re wrong. You did not pay attention to the 2020 season, nor the 2021 off-season. Not even going to defend this mock pick.

At the point in time that the Jets traded away Sam Darnold they committed to taking a quarterback with the second pick of the NFL draft. Wilson is believed by many to be the second-best QB in the draft, and with an exceptional pro day, he fits the bill with what this rebuilding franchise needs.

Teams don’t trade up to the 3rd pick in a good quarterback draft if they don’t plan on selecting a quarterback. Mac Jones not only fits that criteria, but he also is an incredibly acurate passer, fitting the Shanahan system really well.

Patrick’s father was an elite NFL cornerback for many years, and now it’s his turn. The Falcons have needed an elite shutdown CB for years and their defense could use a lot of help. The addition of Surtain and an elite pass rusher could be enough to make the defense respectable, allowing their strong offense to win games.

The Bengals locked up their franchise last season when they drafted Joe Burrow first overall in the NFL draft. Sadly, they lost him the second half of the season because they couldn’t keep him protected. Enter, Sewell a large and nimble Offensive Tackle. He’s debatably the best Lineman in the draft and goes a long way to keeping Burrow safe.

Kyle Pitts might be the top prospect in the NFL draft. If he isn’t he’s at least the top offensive skill position player in the field. The Dolphins need offensive weapons for Tua to excel in his first full season as their signal-caller.

The Lions WR core was completely depleted when Jones and Golloday left for the Jaguars and Giants respectively. Their new QB, Goff, needs someone to whom he can throw the ball. Who better then Chase, the top WR prospect in the NFL draft.

The Panthers traded for Darnold to meet their quarterback needs and already had the weapons to support him. They do, however, need help on the OL to give him enough time to make the plays. Slater, though a little undersized, is the most athletic OT in the NFL draft.

I know, the Broncos just traded for Bridgewater. However, I don’t believe for one minute that they think they found their answer in a player for which they only gave up a 6th to get. I know I’m going to sound crazy saying this, but I believe Fields can be the best QB in this class. He just needs to get better at going through his progressions, which will improve with NFL experience.

It was no secret that the Cowboys could not defend against the pass last year, therefore, they brough in Dan Quinn as their defensive coordinator. Quinn loves strong and physical CBs to press coverage and re-route receivers. Horn is the perfect player for his system.

Last year the Giants defensive line turned it on late and became one of the stronger ones in the league. With the edition of a stud like Rousseau, that line can go from strong to nightmarish. An addition like that can help the defense win games with limited help from the offense.

Philly has very little going on with their WR unit, and their offense overall seems to lack big-play potential. Waddle checks both boxes, with remarkable speed and separation. Should be an excellent downfield threat for Jalen Hurts.

The Chargers found their franchise last year in Herbert and devoted part of this off-season to protecting him with center Linsley. They can finish that job and give him and Ekeler one of the strongest OLs in the league by adding Vera-Tucker in the NFL draft.

Minnesota desperately needs help at LT, as they allowed Cousins to take far too much of a beating last year. Darrisaw is strong at protecting the blindside and is a punishing run blocker both at the line and blocking LBs downfield. Dalvin Cook will surely love running behind him.

Lance is a strong quarterback with every gift he needs to succeed, he just has had very limited experience in doing so. Enter Belichick, who both needs a QB and specializes with diamonds in the rough.

I know I’m the one responsible for this mock draft, but I have to admit I’d be a little surprised if Smith fell to here. With that said, I would be even more shocked if the Cardinals didn’t pick him up to give Murray a great downfield threat.

You can’t just let a guy like Trent Brown leave your team and expect to be okay. The Raiders need to address RT, and fortunately for them, Mayfield fits their need.

With their first pick of the round I had them addressing their need for an offensive playmaker with Pitts. Here they should address pass rusher after losing both Van Noy and Lawson in the offseason. By selecting Paye in the NFL draft they can pick up an explosive rusher who might turn out to be even better than the two he’s replacing.

Can you imagine Parsons cleaning up the scraps left by that monsterous Washington DL? If Parsons does end up in Washington they can start claiming to be the number one defense in the NFL.

It seems like a very Chicago move to insist they got it right with Dalton at QB and pick up a weapon for him to prove himself with. With Montgomery turning it on last year, I don’t see it being a RB, so the logical place to look is WR. Toney is not only that, but he is a versatile playmaker who can fill the gimmick role left open by the departure of Patterson.

The Colts had one of the top defenses in the NFL last year and did most of it without a dynamic pass rusher. If they are able to pick up Phillips in the NFL draft they can fill that need, making Buckner and company even more lethal.

I am not the type of guy to predict draft day trades, afterall, I believe anyone who does is just guessing most of the time. With that said, I told myself that I would include one trade in this mock draft. I have the Titans parting with their first and something else small to acquire Julio Jones from the Falcons.

If Atlanta trades away a strong offensive playmaker then they are going to need to add one. Seeing there is an absense at RB on their team left by the departure of Gurley, Etienne fits that role very nicely. I went with Etienne over Najee Harris solely because he lines up better on the outside, and Atlanta might want to utilize both him and Mike Davis at the same time.

With their first pick, the Jets obviously took Wilson at QB, now it’s time to address their glaring need at CB. Granted, the Jets could just go best available player here and fill a hole on their team, but coverage is an area where they struggled the most last year. Farley is a great press coverage CB and is strong against the run, he should make an immediate impact.

No player fits the team they are heading to better than Harris to the Steelers. They badly need a RB, and stylistically Harris is much like a young Le’Veon Bell. He should work well with Big Ben.

Like the Jets, the Jaguars addressed their need for a QB with their first pick of the round, and also like them, they need help pretty much everywhere else. One of their greatest needs is also CB. Though Moehrig is not a CB, he is great in coverage both deep and against the slot; he’s also debatably the best player available at this point.

The Browns have a pretty solid team all the way around, but they do possess one glaring weakness. With the departure of Goodson, the Browns are left thin at LB. They can solve that by taking the ever versatile Owusu-Koramoah in the NFL draft.

Like the Colts, the Ravens had one of the top defenses in the league last year. Also, like the Colts they did it without an elite pass rusher. Ojulari, though undersized, has all the tools to be a strong pass rusher at the NFL level.

With the retirement of Brees, the Saints need to address their future. With so many teams needing QBs in this NFL draft, it is unlikely there will be QB they like. With that said, they may try to see just how good Taysom and Winston can be by giving them another weapon on offense. Moore’s explosiveness and versatility give him the edge over Terrace Marshall Jr as he helps fill the Saints’ needs more.

Rodgers can handle the offense by himself, he doesn’t need any help. Or at least that’s the way that Green Bay seems to act all the time on draft day. They should get a WR like Marshall to help him, but I’m sure they’ll address something else. How about…LB? Why not? Kirksey has recently departed and they need to fit that hole. Collins sideline to sideline speed and gap attacks should fill in perfectly.

Honestly, I think we’ve seen enough of the Singletary/Moss backfield. I get adding Williams might crowd it up more, but he might just solve the issue of mediocrity from the position and emerge as a feature back.

Baltimore addressed their need for an edge rusher with their first pick, and I could easily see them addressing it again with their second. I would mock that here if it weren’t for the fact that they needed a WR so badly. Marshall gives them a tough WR over the center of the field who fits in very well with the clock grinding style of their offense.

The Buccaneers retained all key members of their Super Bowl Championship team. So, at this point, this is more of a luxury pick than anything. They could select a QB and try to groom Brady’s future replacement. Or they could stock up for another championship run and get a player who would rotate in well on both the DL and at ER, afterall, JPP isn’t getting any younger.

I do wish to give the disclaimer that these are merely the predictions of who I believe these teams will take in these spots and not who I would take if I was on the clock. I also wish to clarify I have no inside knowledge so think twice before betting on my random musings. All that’s left now is to wait and see who ends up where tonight. 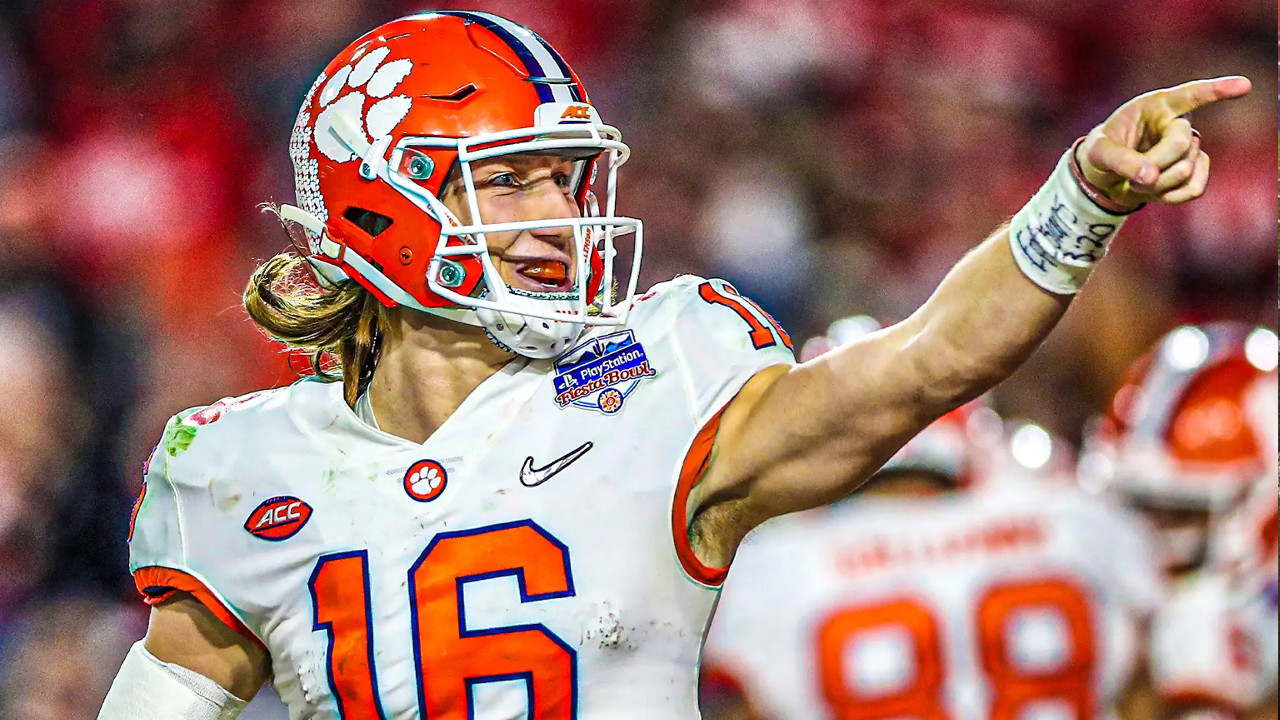