The blowouts of recent weeks were almost nowhere to be seen in Round 6 of the NRL – instead there were close upsets, near-upsets and a particularly wild finish, alongside just a small handful of one-sided games.

Penrith were expected to be fired up against the Broncos after taking the backlash against Stephen Crichton sparking a scuffle against the Raiders last week in their stride.

But the Broncos surprisingly held their own and with a penalty goal keeping them ahead by half time, a major upset brewed. Penrith were forced to fight for their points but kept their cool, being confident enough for a cheeky ‘handshake’ try celebration in response to suggestions that last week’s melee-inciting celebration was a sign of “arrogance”.

It was the Panthers whose persistence would eventually pay off when a dangerous tackle by John Asiata allowed Nathan Cleary to slot a penalty goal to level the scores. Cleary put Penrith back in the lead late in the second half with a two-point field goal before finally cracking the Broncos defence with a try off the back of Jarome Luai.

The threatening glimpses of improvement in the Broncos will help their long-term outlook, but with rematches against the Eels and Titans looming it could take a little more time yet to kick back into gear.

Newcastle and Cronulla both sought to bounce back from respective losses last week, and fought hard for the win in a gripping contest.

Despite suffering from stomach troubles most of the day, Kalyn Ponga was in blistering form, laying on the first and last tries of the game and assisting in two others. The Knights heaped plenty of pressure on Cronulla early and, with Mitch Barnett and Kurt Mann also scoring before half-time, had their eyes set on a convincing victory.

However the Sharks kept themselves in it when Brenton Nikora surged over the try line shortly into the second half. Newcastle’s Brodie Jones kept the lead just out of reach for ten minutes before two successive tries to the Sharks, including a controversially-called one where Mawene Hiroti appeared to have just been pulled out of the field of play while scoring but was still awarded the points, put them just ahead. But Ponga scored the matchwinner in the final minutes after Jones and Blake Green did everything they could to keep the ball alive.

It’s a second time unlucky for Cronulla after going down in similar fashion against the Roosters last week.

The Storm had a wonderful night out against their heavyweight rival of recent years in the Sydney Roosters, courtesy of the dominating playmaking of Brandon Smith and Harry Grant.

The first half lacked the same intensity that had been so prominent in past clashes, as both sides hampered their opportunities with major errors in their ball-handling. Ryan Papenhuyzen looked to be in trouble after taking a knock to the head, and Cameron Munster was disappointing as the temporary stand-in goalkicker with a missed penalty goal attempt. The Storm failed to take advantage after Sydney’s Victor Radley was sin-binned for a high shot, and only managed two penalty goals before half time after Papenhuyzen returned from his head assessment.

Grant and Smith lead the Storm’s second-half charge sharing the dummy half duties. The pair each had a hand in the first two tries of the night, sending Jahrome Hughes and Papenhuyzen over respectively. Grant scored one of his own with a quick dash from dummy half before the Roosters hit the scoreboard in the last minute when a kick from James Tedesco found Matt Ikuvalu unmarked behind the line.

The Chooks had another run of injuries with Jared Warea-Hargreaves and and Siosiua Taukeiaho in doubt for their ANZAC Day clash with St. George Illawarra.

Few could have predicted that Manly Warringah would follow up on their one-point win over the Warriors with a victory against the Gold Coast Titans, who themselves were coming off a thorough belting of Newcastle.

But with Tom Trbojevic back in tow after hamstring problems, the Sea Eagles appeared a very different side to the one that had over 150 points scored against them in their first four games. ‘Turbo’ helped Brad Parker over for an easy 9th minute try and was involved in Manly’s charge down the field that led to Reuben Garrick crossing in the corner. Shortly after, he scored a try of his own after slipping through the Titans defence.

Manly were also impressive in defence, shutting down the likes of David Fifita to keep an opposition scoreless for the first time in seven years. All while they continued to wreak havoc on the scoreboard, with Jason Saab crossing twice off long sprints from Trbojevic and Morgan Harper. Garrick found the corner again for his double and only a close knock-on and some desperate tackling from the Titans prevented the Sea Eagles from going even further ahead.

The stunning defeat raises plenty of questions over the Titans’ lofty premiership goals, while the Sea Eagles are now in a position to start chasing finals contention.

Adam Reynolds will be thankful his late kicking woes weren’t too costly for South Sydney in the craziest ending to a game so far this season.

Coming off a dreadful loss against the Cowboys last week, Wests Tigers kept neck-and-neck with Souths in the first half and took the surprise early lead when Luke Garner scored off a short pass from Adam Doueihi. Doueihi extended that lead to eight with a penalty goal in the 53rd before Souths worked to claw their way back into the game. The comeback finally kicked off when Cody Walker broke through the Tigers defence and sent the ball to Dane Gagai for the left corner.

The game rested in the boot of Reynolds, and with a two-point field goal to tie it up with six minutes to go a thrilling finish was assured. But his kicking boots must have disappeared afterwards because he missed a penalty goal and another field goal attempt which sent the game into golden point extra time. Tom Burgess found the try line for Souths a minute into extra time, but with play on called out of the possibility of a lost ball, Luke Brooks picked it up and ran the full length of the field to ground it down the other end for Wests.

Brooks’ was initially given but the Bunker confirmed Burgess had held onto the ball while putting it down, handing the Rabbitohs victory in a game that had it all.

Fifteen years since their last win at Canberra, the Parramatta Eels shook off their shock loss to the Dragons for a strong second-half performance against the Raiders.

Jordan Rapana’s early fumble was a worrying sign for the Raiders as Parra’s Isaiah Papali’i crashed over shortly after, but Rapana made up for the costly error with the next try in the corner. Maika Sivo trotted over in the adjacent corner to keep Parra in the lead before George Williams responded off the back of Josh Hodgson’s quick dash from dummy half.

Canberra had no points in them after that, and the Eels put up a ruthless attack to amass 23 points across the second half, starting again with Isaiah Papali’i surging through the line. Shaun Lane picked up some points as well to round out an enthralling teamwork display involving nearly all of the Eels on the field. The pain continued for the Raiders as Reed Mahoney and Clint Gutherson finished the game with a try each and Mitchell Moses added on a point with a field goal kick that hit the post before going through.

Both clubs head north next week with the Eels to “host” the Broncos in Darwin and the Raiders travelling to Townsville to take on the Cowboys.

St. George Illawarra’s recent dream run came to an end against a Warriors outfit that was near-perfect.

The Warriors made few errors and completed every set of tackles, with captain Roger Tuivasa-Sheck leading the charge in a standout performance. While Cody Ramsey found the corner to hand the Dragons the first points, the Warriors hit back with Tohu Harris charging over the try line. Small mistakes proved costly for the Dragons as Matt Dufty’s failure to collect or ground the ball behind his own line allowed Paul Turner to put it down short of the dead ball line.

St. George became the last to score in the first half and the first to do so in the second to reclaim the lead, but two missed conversions kept that lead in easy reach of the Warriors. Tuivasa-Sheck put the Warriors ahead after beating several defenders, before a penalty goal from Kodi Nikorima meant the Dragons would need a six-pointer to equalise. But the Warriors kept their attack going to deny St. George a chance to come back.

Both clubs now turn their attention to their respective ANZAC matches against heavyweights the Storm and Roosters.

An opportunity to post their first win of the season came begging for Canterbury-Bankstown against a fellow struggler in the Cowboys.

However it wasn’t until the second half that either team kicked into gear, with a slew of silly errors preventing them both from gaining any traction. It made for a frustrating half with just one try apiece. North Queensland finally found their footing shortly after half time with three consecutive tries, and looked to be running away with the game when the Bulldogs mounted a comeback in surprising circumstances.

With Jack Hetherington sent off for a high shot on Valentine Holmes, Canterbury spent the last 25 minutes down to 12 men. But tries to Kyle Flanagan and Tuipulotu Katoa put the Bulldogs back within striking distance of the lead. However an offside call by the Bunker denied Nick Cotric the potential equaliser, and Mitchell Dunn tore through the right edge to secure the Cowboys’ second consecutive victory.

Canterbury therefore remain the sole winless team and unless they produce something special against Cronulla next week, it may remain that way for some time yet. 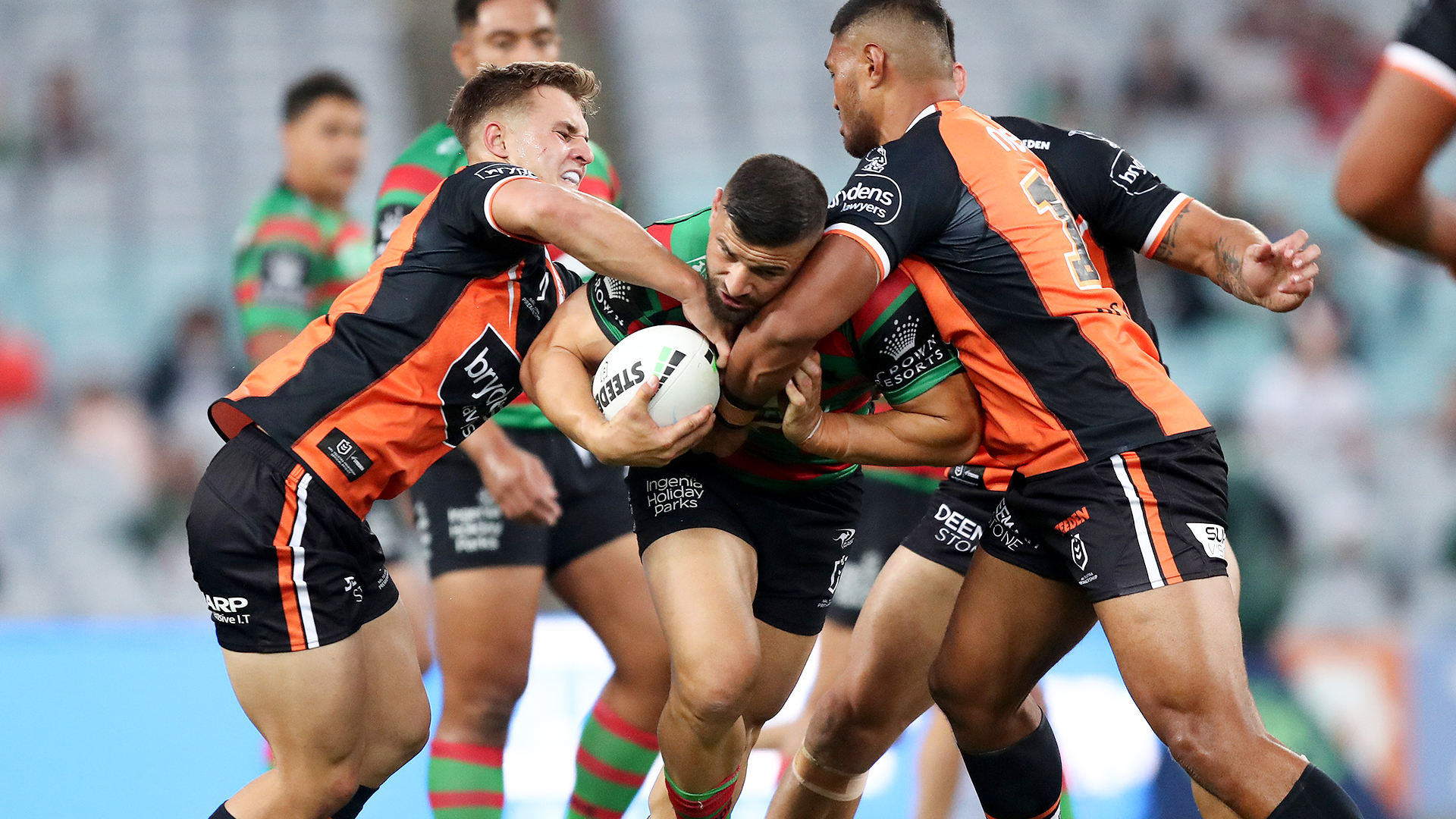