2021’s NRL newcomers have showed what they’re capable of, with the likes of Sam Walker, Reece Walsh and debutant Zac Cini shining for their respective sides in Round 8. And as injuries continue to mount, plenty of eyes will be on these young guns through the next few weeks.

The weekend saw a mixture of massive blowouts, see-sawing affairs and surprise wins, as the Roosters found themselves in further trouble with injuries, the Raiders and Sharks gave uptight half-time leads, and the Broncos broke a club record with their shock comeback against their South-East Queensland rivals.

The Canberra Raiders fired some pre-game shots on social media, but it was South Sydney who went on to have the last laugh.

Canberra claimed the early lead with Jordan Rapana down the left edge and Elliot Whitehead beating two defenders. The Rabbitohs kept themselves within reach through the first half but a plethora of injuries made it difficult and a fumble from Jaxson Paulo in their own in-goal allowed Sebastian Kris to score for the Raiders in the 25th.

Souths found the lead down their left edge with an advantage in numbers to send both Dane Gagai and Alex Johnston over the line. Jaydn Su’A also scored to take the lead to 16, but the Raiders fought hard to try to close the gap in the final ten minutes. And they might have done, had obstruction of the Souths defence not cost Jack Wighton two tries.

Now at four straight losses, the Raiders have an opportunity to salvage their premiership contention when they host the Knights next week before travelling to face the Bulldogs.

A crushing second-half display of dominance from the Storm leaves Cronulla once again wondering what could have been.

The rivalry between the two had another element to it this time, with former Storm centre Will Chambers returning to the NRL in a Sharks jersey after his short stint in the Japanese rugby union. With a try and penalty goal apiece in the first forty minutes, the only thing that separated the two was a missed conversion attempt from Cameron Munster to give the Sharks a narrow lead. But after half-time, their defence opened right up and the Storm took full advantage.

Harry Grant was spectacular in his first game in the Storm’s starting lineup, setting up three tries from dummy half while having a hand in another two. Tom Eisenhuth, Jahrome Hughes and Brandon Smith were among the names to find the try line through some easy gaps, while Reimis Smith picked up a hat-trick. Despite their best attempts, Cronulla struggled to make good use of the ball until the final minute when Connor Tracey dived into the left corner to save some pride.

It’s a new low for Cronulla this season, following a handful of games where they looked a late chance only to lose by a single-digit margin.

Humiliated by the Titans in Round 2, the Brisbane Broncos got their revenge in one of the must stunning comebacks of the year.

Gold Coast however threatened to run away with it thanks to some lucky passes and a touch of acrobatic work. In less than 14 minutes they’d taken a 22-0 lead but from there the Broncos wrestled their way back into it. Jamayne Isaako picked up a double as Brisbane closed the gap completely for a dead-even scoreline at half time.

From there, they took the lead themselves as Corey Oates snatched an intercept and ran more than 90 metres for the line. The new halves pairing in Anthony Milford and Michael Gamble was on fire throughout, both leading the charge that brought about a 14-point lead. Mitch Rein gave the Titans a boost with a try from the dummy half but the Broncos held them off enough to claim their second win of the season.

In doing so, the Broncos set a club record for their biggest-ever comeback.

Penrith’s perfect start to the season continues after putting an end to Manly’s winning streak.

While the Sea Eagles refused to go down without a fight, Penrith charged onward, starting with a combined 90-metre effort that culminated in a kick finding Dylan Edwards in the in-goal. Brian To’o found the line as well before Tom Trbojevic put the Sea Eagles on the board with an intercept and a solo 70-metre dash.

But for each try the Sea Eagles mustered up, the Panthers responded in kind. Manly had some moments where they kept hammering at the Penrith defence but couldn’t break them. Instead, the Panthers handed the final blow, as Liam Martin saved a Dylan Edwards grubber for Stephen Crichton to collect and score with three minutes remaining.

Penrith’s eight straight is the best start to a season by any club since the Storm won their first nine in 2012. The Panthers will get to equalise that against Cronulla next week.

Matches between these two old rivals have been known as hard slogs. But this weekend’s meeting was anything but as Parramatta romped home.

The cracks showed in Canterbury’s defence early as Reed Mahoney slipped through with ease to set up Clint Gutherson for the opening try. The Bulldogs were given few opportunities with the ball, especially in the first half, and they struggled to maintain a cohesive defensive line. This allowed Maika Sivo to overpower four defenders for his first try against the Dogs before Gutherson sliced through for his second try of the evening.

The Bulldogs still produced some bone-rattling tackles and scored twice in the second half to bring the margin down to 12. However, the Eels pushed on as Sivo and Marata Niukore stretched the lead back. Both sides were beset with injury troubles with the Bulldogs’ Dylan Napa succumbing to shoulder trouble and Parra’s Nathan Brown suffering a hip pointer injury.

But injury-wise, the Eels have still fared better than their next opponent in the Sydney Roosters, which gives them a chance to

The Chooks will continue to be under-strength for a while yet, with injuries dampening their 34-point flogging of the Newcastle Knights.

Brett Morris was the most notable concerning casualty for Sydney, tearing his ACL to put the future of his rugby league career in doubt. Lindsay Collins suffered a similar injury, both players forced off the field in the late stages of the game to end it on a sour note.

Beforehand, the Roosters had put on a dazzling display with Brett’s twin Josh scoring a hat-trick. Sam Walker was once again noted for his stellar performance, assisting in four of their seven tries and scoring one himself. Matt Ikuvalu, Angus Crichton and Daniel Tupou also found the line throughout the game.

The Roosters’ roster for next week’s clash against Parramatta is set for a shake-up, with James Tedesco expected to return and Sitili Tupouniua out due to suspension.

The same small errors that have plagued North Queensland for three years have haunted them yet again, denying them a strong early start that led to a failed comeback against New Zealand.

Moving young gun Reece Walsh from last week’s fullback role to five-eighth paid dividends for the Warriors, as the kid involved himself in every other play. His halves partner in Kodi Nikorima also starred, slicing through two gaps to score the first try of the day before breaking through the line again to help set up the Warriors’ third. The Cowboys meanwhile kept giving up their chances at the try line with several dropped balls.

But a slew of Warriors errors helped the Cowboys work their way back into the game, holding New Zealand scoreless in the second half. However, they spent the last ten minutes making more errors that cost them the matchwinner. Valentine Holmes had a rough day, throwing a blatantly forward pass in desperation before kicking the ball too powerfully and sending it over the dead-ball line.

The Warriors next take on the Sea Eagles, who upset them by a field goal just last month.

Zac Cini was the name on all the headlines following Wests Tigers’ upset against St. George Illawarra.

The young backline, easy to notice due to his distinct blonde mullet, produced a try and a try-saver on debut and was widely seen as having a starring role. The Dragons drew first with Cody Ramsey in the left corner, but after Zac Lomax came off the field with a thumb injury the Tigers’ attack targeted down the right edge and came up trumps. They were lucky to equalise in the first half as David Nofoaluma tapped back a Luke Brooks kick and Tommy Talau managed to catch it one-handed to score in the corner.

St. George fought hard but failed to find the try-line again. Instead, Cini and Joey Leilua found the left corner to hand Wests a lead just beyond a converted try. A bizarre little knee at Talau’s play the ball by Kaide Ellis gave the Tigers a chance to add a penalty goal to the scoreline, but Adam Doueihi barely missed the goal to wrap up the game with an eight-point victory.

The win was an important response to questions surrounding coach Michael Maguire, but they’ll want to back it up against the Gold Coast Titans next week for a chance to properly dispel the talk. 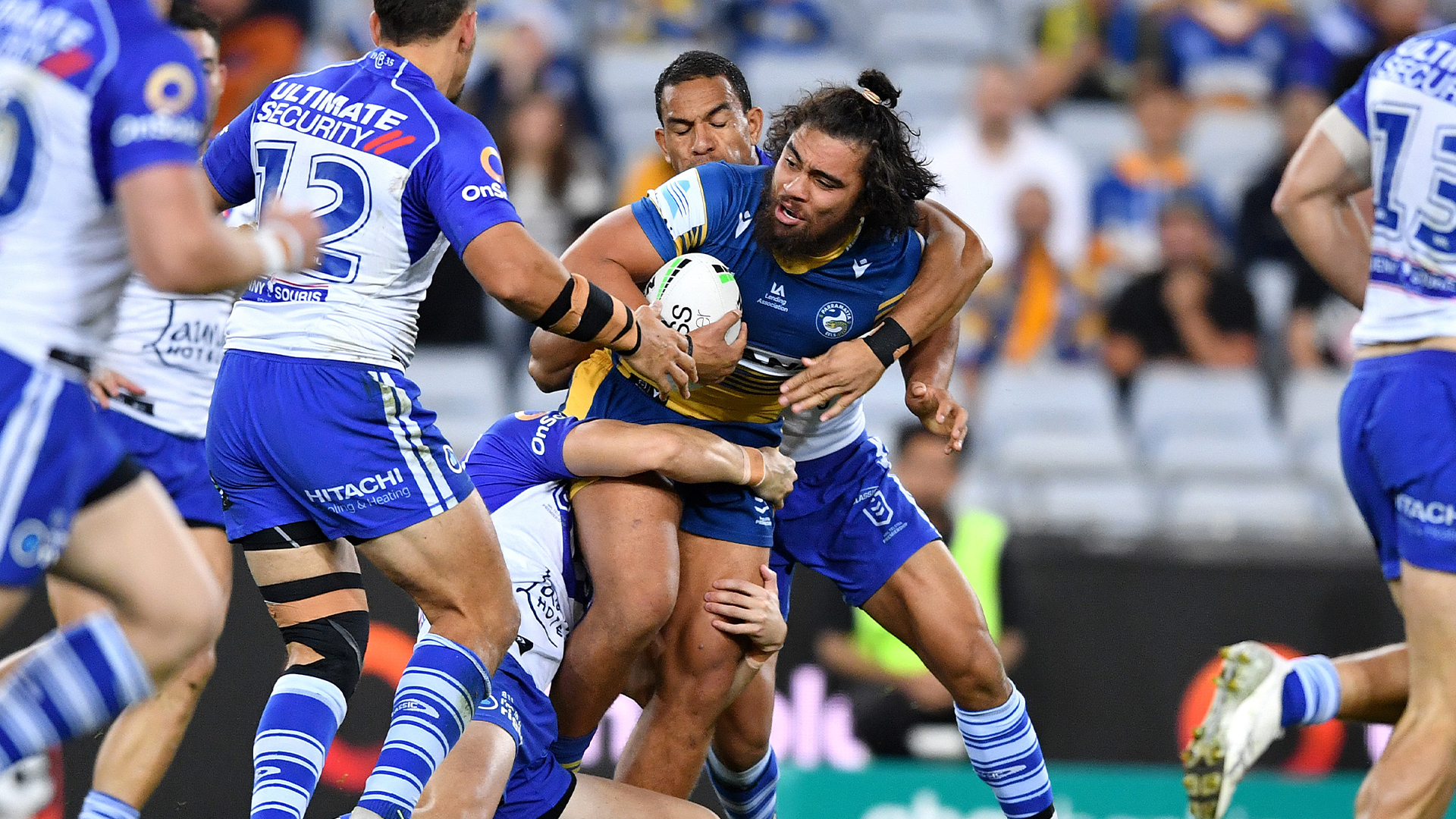