The NRL returned to hosting its traditional Anzac Day matches for Round 7 of the season after the COVID-enforced suspension of last year’s suspension prevented the clashes from being held on April 25. The Sydney Roosters and Melbourne Storm once again were the winners in their annual matches against the St. George Illawarra Dragons and New Zealand Warriors respectively.

Elsewhere, Manly Warringah and North Queensland continued their surprise winning runs, South Sydney survived another scare, and Canterbury-Bankstown claimed their first win of the season in a weekend where emotions were running high.

Penrith’s undefeated run continued against a Knights outfit that stayed in fight until the last ten minutes.

Newcastle held their nerve despite the Panthers claiming a ten-point lead within twenty minutes thanks to some crafty work from their halves. The determination paid off in the 29th when an offload from Kurt Mann allowed Starford To’a to run past the Panthers defence and secure the Knights’ first points with a massive fend on Dylan Edwards. For the remainder of the first half and the majority of the second half, dogged defence from the Knights kept the scoreline at 10-6.

Even when Edwards found a hole in the defence immediately after a scrum to extend the lead, the Knights didn’t completely collapse. But they’d been starved of the ball and forced to focus on their defence, keeping them from scoring. By the time Brian To’o scored a front-flip try for the Panthers, Newcastle had still made no further progress in attack.

And with their next opponent in the Sydney Roosters back in good form, the Knights won’t be able to rely solely on their defensive efforts.

South Sydney once again found themselves having to dig deep for a hard-fought victory.

The Titans’ David Fifita wreaked havoc in the first half with a hat trick in which he overcame a combined 11 South Sydney defenders for his first two before cleanly slipping through the line off an offload from Brian Kelly. Souths scored two of their own but wasted other opportunities, while Jamal Fogarty also found the tryline for the Titans before half time. With a 24-10 lead, a Gold Coast victory seemed certain.

But the veteran playmaker Benji Marshall helped the Bunnies to a massive comeback with two tries and a heavy involvement in their attacking plays. They were near flawless with no errors in the second half and the Titans crumbled with just one more try to their name. The Rabbitohs’ other second-half tryscorers were Dane Gagai and Alex Johnston, the latter off an outstanding flick pass from Marshall reminiscent of his heroics for Wests in the 2005 Grand Final.

The Bunnies’ fortune in their last two games bodes well for their season, with the up-and-down Raiders awaiting them before a rematch against Melbourne Storm.

Whatever promise the Broncos showed last week against Penrith evaporated quickly in Darwin against the Parramatta Eels.

Problems showed from the start for Brisbane as a dropped kick-off allowed Maika Sivo to score in the corner within two minutes. Tevita Pangai responded nine minutes later but after a short-lived deadlock the Eels took full control. They’d all but won it by half time when the scoreline read 24-6.

Bryce Cartwright was noted for his performance, which included a quick pass that helped Sivo to his second try and a quick charge as first receiver to go over the line himself. The likes of Tom Opacic and Isaiah Papali’i also had a good night out as Parramatta showed they’ve hit a roll since the Broncos threatened to upset them back in Round 1.

Whether they can keep it going through the season and challenge to break their 35-year premiership drought remains to be seen, but so far the signs of a fairy tale season are there.

The sight of Bulldogs coach Trent Barrett embracing his players summed up an emotional first win of the season against Cronulla.

Canterbury held the Sharks scoreless in the first half while establishing a strong lead. Will Hopoate claimed the first points by powering through two defenders to the tryline. Even without several key players the Bulldogs kept finding ways to dominate as Nicks Cotric and Meaney also found the line.

The Sharks struggled in several to make a comeback with six try attempts denied, while Siosifa Talakai was sin binned for a brutal shoulder charge that forced Matt Doorey off the field for a HIA and allowed the Bulldogs to become the first club to activate the 18th man. But with Blayke Brailey and Mawene Hiroti finding the line on either end of the second half, Cronulla were a chance of a come-from-behind victory similar to those that they’d been on the wrong end of in recent weeks.

But Canterbury held off Cronulla’s last-gasp efforts and secured a well-deserved victory, sparking some hope of a better-than-expected season.

The North Queensland Cowboys rose to the challenge with an impressive comeback over the Canberra Raiders.

Another neck-and-neck start looked to be getting away from the Cowboys as Canberra’s big men caused carnage. Josh Papalii managed an offload to help Emre Guler over, while Jordan Rapana’s two tries in the left corner seemed to pave the way for a blowout win.

But a dropped ball following George Williams’ try allowed the Cowboys a chance to tighten the gap before half-time, and Ben Condon capitalised when he collected Scott Drinkwater’s grubber kick in the in-goal. From there, the Cowboys wrestled their way back into the game as Valentine Holmes’ kicking helped pile the pressure on Canberra. Reece Robson and Justin O’Neill tied the scores back up before a penalty allowed Holmes to slot a goal and claim the lead for the first time with ten minutes to spare.

The Raiders kept hammering at the Cowboys defence but a poor moment of discipline helped condemn them to a third straight loss.

Wests Tigers may deny any crisis talks but their latest on-field disappointment at the hands of Manly has left a heavy question mark hanging on the future of coach Michael Maguire.

They were in it for the first fifteen minutes with the opening try but fell apart shortly after as the Sea Eagles piled on the points. Much like in last week’s surprise demolishing of the Titans, Tom Trbojevic played a major role with another try and a handful of line breaks and assists. Manly also provided some odd entertainment for viewers with Haumole Olakau’atu performing an accidental front flip in his failed attempt to join in on Martin Taupau’s try celebration.

By then Daly Cherry-Evans had picked up a double and the Sea Eagles rode the momentum all the way, with another three players involving themselves in the try-scoring action. With another convincing win in hand, they head out west next week seeking revenge against the Penrith Panthers, who humiliated the Sea Eagles at home in Round 4.

Wests meanwhile turn their attention to St. George Illawarra, who still sit comfortably in the top eight despite a second straight loss.

The first of the two traditional Anzac games saw the Sydney Roosters back in winning form over St. George Illawarra.

The game had its strange moments with the Dragons barely denied their first crack at the tryline before being penalised for Mikaele Ravalawa’s bizarre headbutt on Brett Morris’ ribs. While the Dragons still eventually claimed the first try and held a two-point lead for most of the first half, poor discipline came back to bite them when Jordan Pereira was sin binned for a shoulder charge on James Tedesco and the Roosters capitalised with two quick tries.

Sydney also suffered a sin bin when Ben Marschke deliberately interfered with a 20m restart, but held their nerve and further extended their lead. Young gun Sam Walker had another great showing, finding the tryline with a dummy pass and assisting two other tries. The Chooks kept the pressure on St. George throughout to deny them the opportunity come back into contention, securing a heavy win.

The Dragons will hope to find their next win against the disappointing Wests Tigers.

The Warriors’ positioning of certain players came under fire following their 22-point drubbing at the hands of Melbourne.

Captain Roger Tuivasa-Sheck played out of position on the wing to make way for promising fullback Reece Walsh, who was making his NRL debut. While Walsh’s performance was commended, RTS had a mixed night that saw him lead the way with five-eighth duties in attack but with errors and missed tackles he didn’t have the same influence on the game that he’d had in his usual role.

The Warriors weren’t helped by the sin binning of Josh Curran for high contact on Melbourne’s George Jennings as the Storm ran rampant throughout the game. Jahrome Hughes was stellar against the club that had tried to lure him home, setting up four tries for the Storm in just the first half. Reimis Smith and Josh Addo-Carr laid on a double each, while New Zealand’s Ken Maumolo saved some face with a hat-trick.

Despite the criticisms, the Warriors expect to keep Walsh as a fullback with RTS moving to union next year. They’ll hope for at least some improvement against North Queensland next week. 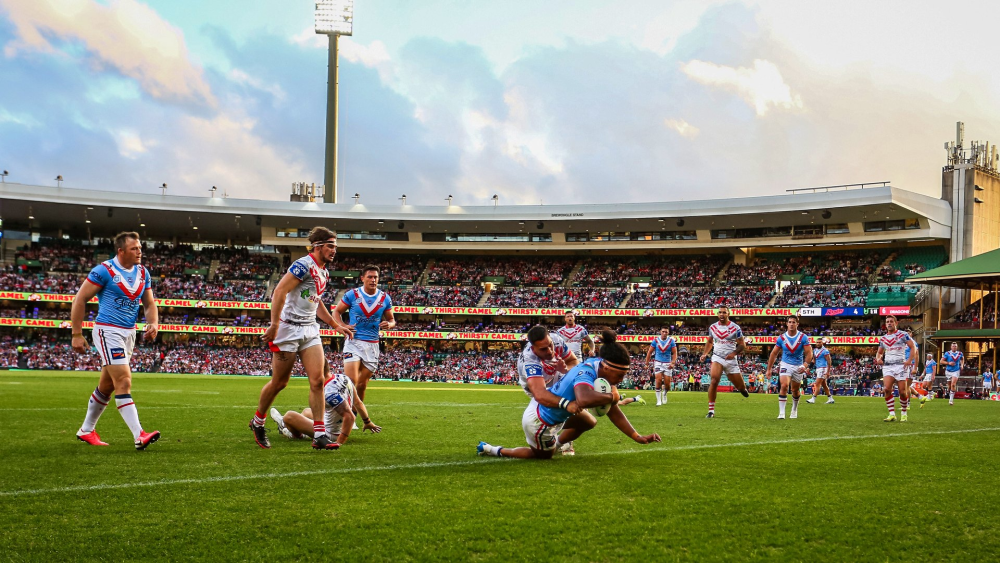