Today’s first offering of Premier League action ended all square in the Black Country Derby as Fabio Silva’s opener was cancelled out by Mbaye Diagne, in a game played largely in torrential weather conditions at The Hawthorns.

Baggies boss Sam Allardyce has faced Wolves without defeat more times than any other team in his Premier League career, playing them six times without losing. Earlier this season West Brom came out on top at Molineux winning 3-2 thanks to a brace from Matheus Pereira and a winner courtesy of Semi Ajayi.

The game got off to a fairly slow start and the first opportunity came after 30 minutes when Nelson Semedo picked the pocket of Ajayi just outside the box and forced Sam Johnstone into a save. Bizarrely, Allardyce made a first-half substitution as O’Shea was replaced by Matt Phillips in what looked like a change of shape from a back three to a back four.

The baggies started to dominate the game after the early substitution, and they almost took the lead only for Mbaye Diagne to have a close-range effort blocked on the line by Romain Saiss. However, a minute before the half time whistle blew Wolves took the lead through Fabio Silva after some liquid build-up play. Otasowie moved in from the right side and found Vitinha who backheeled the ball into Semedo. He lost possession in the box but Kyle Bartley’s clearance rather fortuitously ricocheted off Silva which looped over Johnstone into the back of the net. A poor goal for the home side to concede just before half time.

Ten minutes into the second half Albion should’ve equalised. Phillips gets the better of Semedo down the left and squeezed a cross into Connor Gallagher who almost has half the goal to aim at but Rui Patricio gets across quickly to bat the ball out of harm’s way.

West Brom then did get their equaliser and you can’t say they didn’t deserve it. Connor Townsend picked up the ball on the left and swung in a cross towards the back post where Diagne was waiting and headed powerfully across goal into the bottom corner.

In the final minutes, the conditions became much worse with rain absolutely pouring down onto The Hawthorns. This made chances harder to come by as the ball struggled to move on the boggy surface. The 1-1 result means the baggies are now ten points off Newcastle in 17th and Wolves stay 12th on 42 points.

The hammers held on to win 2-1 against Burnley at Turf Moor, as a double from Michail Antonio sealed the three points for David Moyes’ side.

Burnley manager Sean Dyche unsurprisingly named an unchanged side after their 4-0 win at Wolves last week. Hammers boss Moyes welcomed back two key players in Aaron Cresswell and Antonio as both had been sidelined with injuries.

West Ham started brightly but the home side was given a golden opportunity when they were awarded a penalty after 16 minutes. Hammers midfielder Tomas Soucek made a clumsy challenge on Chris Wood who won and then converted the spot-kick to continue his fine run of form, having scored a hat-trick against Wolves last week.

West Ham immediately struck back through the returning Michail Antonio to score his eighth of the season. Vladimir Coufal’s cross from the right was aimed in the direction of Antonio who bullied the defenders to the ball and rose above them to put a bullet header past Nick Pope to level the score at 1-1.

Antonio got his second before the half-hour mark to put the hammers ahead. This time it was Said Benrahma who whipped in a cross from the left with pace across goal, which was met with a glancing touch from Antonio into the far corner that Pope could do nothing about. Just minutes later Benrahma almost got a goal for himself, whose effort went inches wide of the far post with Antonio throwing himself at the ball as well, who was just unable to get on the end of it.

The game was shaping up to be a thriller with both teams playing attacking football and chances being created at both ends. This time it was Burnley’s turn to go close as Craig Dawson cleared an effort off the line from Matej Vydra who almost caught the hammers out by pouncing on a mistake by Issa Diop.

West Ham dominated at the start of the second half with their attackers causing havoc for the Burnley defence. The linkup play between Antonio, Jesse Lingard and Benrahma was proving to be very dangerous and Burnley could not deal with it.

Dyche decided to bring on Jay Rodriguez to try and get something from the game and he almost had an immediate impact. After a bit of goalmouth scramble, the ball eventually fell to Rodriguez just four yards out and he scuffed his effort wide of the post. A rare chance wasted could prove to be costly.

The home side piled on the pressure towards the end of the game and Pope was called up to a late corner and almost got on the end of it. However, the late pressure was not enough to get that equaliser and West Ham held on to their lead and close that gap to Chelsea to three points, keeping their Champions League dream alive. 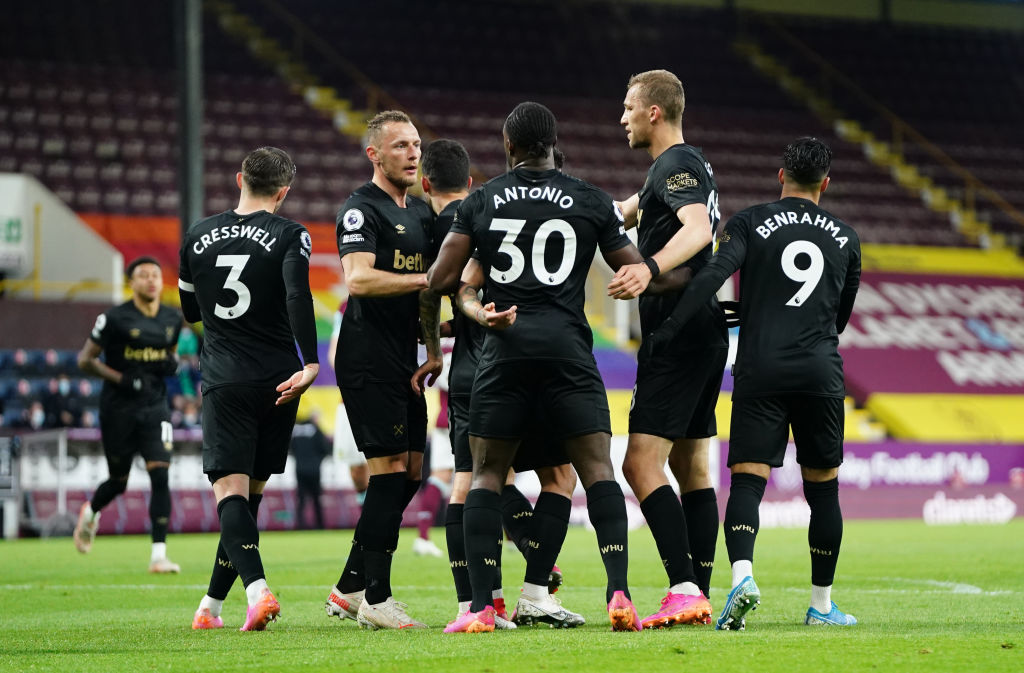