The Nottinghamshire Outlaws came out on top at this year’s finals day at Edgbaston and secured their second trophy of the season. It was a spirited and classy display from Notts who were a lot of people’s picks for the tournament when it started way back in early July.

However the Outlaws would have to wait for their semi-final as the Birmingham Bears and Glamorgan did battle in the first match. The Bears on their home ground were put into bat by Glamorgan and they got off to a great start courtesy of young opener Ed Pollock’s sublime fifty. This along with solid contributions in the middle order from captain Grant Elliott and Colin De Grandhomme saw the Bears post 175-9 of their 20 overs.

Ed Pollock on his way to fifty first Semi-Final

In truth Glamorgan struggled from the outset in their chase losing opener Aneurin Donald very early on. Star man Colin Ingram then fell to a fantastic catch from Grant Elliott for just 11 before the welsh side lost overseas pro David Miller and youngster Kirian Carlson to be 48-4 off 5.5 overs. Their skipper Jacques Rudolph played superbly for 65 and shared a decent stand with Graeme Wagg however he was brilliantly run out by Aaron Thomason and despite some late power hitting from Andrew Salter that saw Glamorgan get within 11 of victory the Bears booked their place in the final.

Then it was the turn of eventual champions Notts against Hampshire. Hampshire won the toss and like Glamorgan earlier in the day decided to chase. Notts lost star man Alex Hales early however fellow opener Riki Wessels took on the mantle and got Notts of to a decent start. It was only when he fell to leg spinner Mason Crane for 49 that Notts began to get pegged back. In the end a 35 from Samit Patel and a quickfire 24 from captain Dan Christian got the Outlaws up to a score of 169-7.

Hmapshire didn’t have the best of starts hero from the quarter final Shahid Afridi smacking a Samit Patel full toss straight to Alex Hales in the deep to leave his side 0-1. however James Vince did what he has been doing all year for Hampshire and got his side back on track. It looked certain that they would win the match needing just 65 0f 46 balls with six wickets in hand. Notts on the other hand thought differently and when Vince was brilliantly caught on the fence by Brendan Taylor for 56 and Michael Carberry was run out by a direct hit from Samit Patel the game began to change.

From there Notts would somehow go on to bowl Hampshire out for 146 in 18.4 overs and record a comfortable 23 run win to book their own place in the final.

After a bit of a break and the highly anticipated sing off between Sky’s David Lloyd and Andrew Flintoff we were ready to go it all came down to this one match. For the third time in the day the team who won the toss decided to chase in this case Birmingham meaning that Notts would once again have to bat first. They were in trouble early doors to three down inside the opening five overs with just thirty on the board Alex Hales who fell cheaply again, Riki Wessels and Tom Moores who recieved his second duck of the day were all back in the hutch. From there it looked pretty bleak for the Outlaws then came a magnificent 132 run partnership between Samit Patel and Brendan Taylor.

Taylor eventually holed out to Dominic Sibley off the bowling of Colin De Grandhomme for 65 however the damage was done and Notts were now staring down the barrel of 180 plus. Thanks to a final over that went for a whopping 23 at the hands of the skipper Dan Christian, Ollie Stone the unfortunate bowler on the recieving end, the Outlaws reached a total of 190-4. A fantastic recovery from the perils of 30-3.

In a chase of this magnitude a good start was essential for the Bears, however they didn’t get it. Opener Dominic Sibley was bowled by an absolute beauty from Harry Gurney to get things of and rolling. Then Birmingham’s hero from the first game Ed Pollock was run out by a brilliant throw from Samit Patel. Pollock paying the price for trying to just jog through for a single. It was soon four down as youngster Adam Hose and captain Grant Elliott fell at the hands of Jake Ball and Dan Christian respectively. However as long as Sam Hain and Colin De Grandhomme were at the crease the Bears still felt the game wasn’t quite dead.

This view certainly looked justified as Hain smashed his way to 72 and De Grandhomme 27. This hope vanished though when Gurney returned to the attack to polish of both batsman. De Grandhomme playing on for 27 and Hain caught in the deep for 72. Birmingham couldn’t recover from these two blows and Notts strolled to their second win of the day by 22 runs and ultimately the t20 blast crown.

The raw emotion at the end from the Notts players was clear to see. The best team had come out on top at the end of it all and claimed a thoroughly deserved victory. There were many defining performances from Notts on their way to their second trophy of the season already. Wessels for his 49 and Mullaney for his 3-22 with the ball in the first game. Brendan Taylor for his 65 with the bat in the final and Harry Gurney for a brilliant bowling effort of 4-17. All of these players played a part but one man who stood out was Samit Patel he was simply everywhere for the Outlaws. He got runs in both innings with 35 and 64 unbeaten, he claimed the key wicket of Shahid Afridi in the semi and produced two brilliant run outs. He and Notts as a whole had a fantastic day and fully deserved their victory at the end of it all. 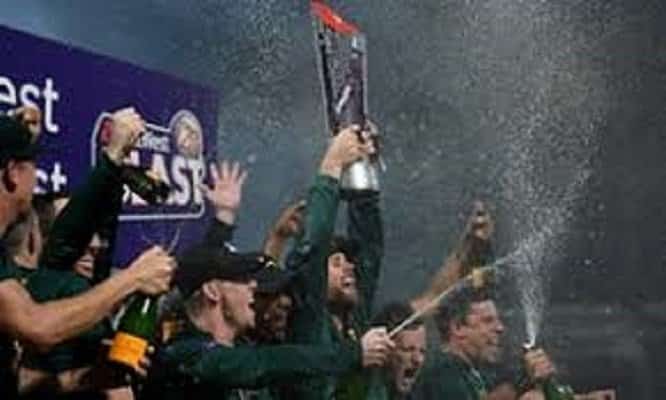