Last time we discussed who and who will not win every division in the AFC, this time we’ll jump to the NFC and predict who will come out on top and who will bottom out in each division.

In my opinion, the NFC is much tighter than the AFC and a lot less cut-and-dry. Not only in each division but conference-wide. Like last year, it seems to be much more top-heavy than its red counterpart, leaving a lot of uncertainty in that middle zone of teams that are in between being in the hunt and mid-level playoff teams.

The division we’re starting with is easily one of the tightest ones so far this season.

Just a couple of years ago, the NFC East was a division of four teams that all had losing records and were overall just terrible teams, which was either due to injuries or just a lack of talent overall. For some teams, it was both. This led to popular NFL and other sports YouTuber UrinatingTree to coin the nickname ‘Tank Division’.

At first, I was disgusted by Tank Division. At how awful every team was in the NFC East.

Then I found suspense in how every team kept tripping over themselves in division games.

Then I became a devotee of the Football Team for the memes.

Fast forward two years later and now you have at least 3 teams with bright futures and potential playoff births. Right now, the NFC East has 3 teams over .500. It’s the only division to achieve that feat at the moment, as most of the rest have either 1 or 2, and some of them have zero.

After Week 4, both the Giants and Cowboys are 3-1 while the Eagles stand as the lone team to still be undefeated. Not only in their division, but the league as a whole.

That doesn’t make labeling a winner any easier. The Giants are sporting a nice defense and run game while the Cowboys’ only loss came in Week 1 against Brady and the Bucs. Still, I’ll go with the current standings and predict that at the end of the season the Eagles will be crowned the NFC East winners. Their team is one of the most well-rounded in the league, which is why they’re still undefeated, and Jalen Hurts has developed nicely into a good quarterback who can get it done through the air and on the ground.

Their defense is nothing to scoff at either, headlined by Darius Slay who has proven that he is still an elite cornerback.

Choosing a loser is pretty easy, it’s clearly going to be the Commanders. It seems nothing can go right for this team after managing to snag a win against the Jaguars in Week One. Carson Wentz continues to have one of the most puzzling fall-offs in NFL history, their defense has not lived up to the hype at all, and overall they are just a bad team. No chance they turn it around, but hey! On the bright side, they might be able to get a good QB in this upcoming draft.

That’s what they should be focusing on now anyways because this season is a wash for Washington.

After four games, the NFC West is, to quote Thanos, perfectly balanced, as all things should be. All teams at the moment are exactly .500. However, while their records are the same, there is a clear difference in quality among some of these teams. For example, the Seahawks being 2-2 is not the same as the Rams 2-2.

Context is a great thing because it gives us a better idea of why these teams all have the same record. The Seahawks’ two losses have came to the Falcons and 49ers respectively, while the Rams’ two losses have came to the 49ers (someone they seem to always lose to in the regular season) and the Bills. If you remove the Niners, there is a clear difference in the quality of opponents lost to between those two teams.

Basically, the point I’m getting at is that these teams all may have the same record, but that doesn’t mean they’re all as good as each other.

So, who do I predict to win the NFC West? Well, for me, it’s between last year’s Super Bowl winners, the Rams, and the team that just beat them, the 49ers. LAR hasn’t looked as dominant as they did a season prior, and Matthew Stafford specifically has struggled, as he currently leads the league in interceptions. This early-season struggle can be explained by injuries, which have especially been thinning out their offensive line.

Meanwhile, the 49ers have been wildly inconsistent, especially on offense. Again, this can be attributed to injuries, but still. Their defense, on the other hand, has been incredible and currently sits at the top of the league in many categories. So, with that in mind, I’ll choose the 49ers to upset the Rams and win the West. This may be a reach, but this isn’t a prediction article without a few hot takes.

As for the losers, it’s between the Seahawks and Cardinals. The 49ers’ defense looks way too good to allow them to finish in 4th, while the Seahawks have had a paper-soft schedule and the Cardinals have looked extremely sloppy through four games. I’ll go with the Seahawks as the losers of the division, but I’d understand if someone chose Arizona.

For once, I won’t just look at this division and say “the Packers”. The Vikings have started off just as hot as them as both teams currently sit with 3 wins, with one of the Vikings’ even coming against the Packers in Week One.

Still, that’s not to say the Vikings have looked great in all their wins. They’ve been really close. And ugly, for the most part. Their defense seems to be a huge concern, as they almost allowed Andy Dalton and the Saints to drive down the field in less than 30 seconds to kick a game-tying field goal.

Thankfully, Lutz double-doinked the 61-yard attempt, allowing the Vikings to scrape out a win in London, 28-25.

As for Green Bay, it’s been an odd start. They’re 3-1, yes, but they don’t feel 3-1. Outside of the bi-annual dunking on the Bears in Week Two, neither of their wins have been that impressive. Barely winning against the Buccaneers is a given, though, they have a great defense and Tom Brady is somehow still playing.

Barely getting a win in overtime against the Patriots on their 3rd-string quarterback? A day 3 pick who was probably planned to have zero playing time this year? Yeah, there’s a problem.

And I think at the top of it all is Rodgers. I understand he doesn’t have the greatest receiving core in the league, but a lot of throws have been on Rodgers himself. He’s just looked off all season, having already thrown 3 picks this year. May not seem like a lot, but that’s only 1-2 less than his season totals for the last 3 seasons.

With that being said, I’ll take the Vikings to win the division. We have been robbed of seeing Justin Jefferson perform in the post-season up until this point, and I think we’ll finally see that happen this year.

I have yet to mention the Bears and Lions, and that’s because there is a clear step below the two teams mentioned above. The Lions have no semblance of a defense whatsoever and have given up the most points per game by a wide margin, while the Bears have single-handedly set passing offense back a century with how they’ve performed these first four games. It’s a miracle they’ve managed to achieve a .500 record.

Unfortunately, the Bears’ defense and impressive run game will keep them from getting last place, so that dishonor will have to go to the Lions. While they are a much more entertaining team to watch, they don’t have the defense to generate a significant amount of wins. And, while I like Dan Campbell a lot, their coaching and scheming leave a lot to be desired.

Last and arguably least, the NFC South. This division is a couple of fluke Atlanta wins and generational Tampa defense away from having all its teams be under .500.

The NFC South might have the least quality teams of any division in the league. Even the Bucs, especially Brady, don’t look like themselves and their actual play on the field is being overshadowed by off-field drama involving the future first-ballot Hall of Famer. Even with their unexpected woes, their lack of quality competition in the NFC South makes the Buccaneers the winners by default.

On the other hand, you could make a case for any of the other three teams in the division being the losers. You could even make a case for the Bucs themselves, though I personally think they’ll smooth things out come mid-season. As for the rest? It’s not looking so good. I’ll leave Atlanta out of the discussion- for now- since they surprisingly haven’t completely collapsed yet.

That leaves the two 1-3 teams. The New Orleans Saints and Carolina Panthers. Where to begin? Well, for one, both of these offenses are pedestrian at best, as they both are in the bottom half of the league when it comes to scoring. Carolina’s defense has been solid, but not good enough to get anything except one win after four games, and that came against the Saints in Week Three. Overall, these two teams simply look lost and their fans are likely going to be in for long seasons.

Whose season will be longer, though? To me, the answer is the Saints, they’re coming in last in the South. In what has been an extremely disappointing year so far, New Orleans will continue to disappoint, as Carolina’s somewhat decent defense will be enough to keep them out of the basement of the NFC South.

Those are my predictions for who will win and lose each division in the NFC. What do you think? Do you agree with me or do you have your own predictions? 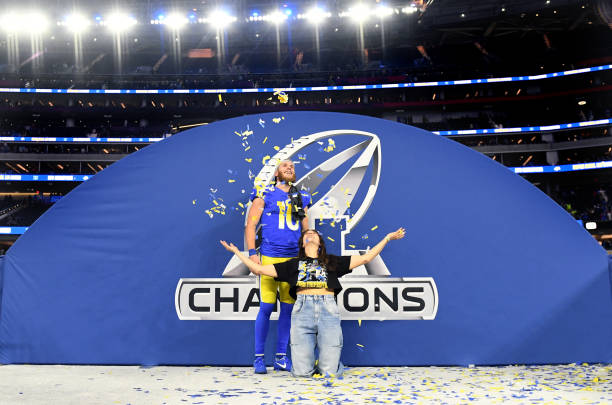