Week 11 of the Premier League and four more games to take in, so here is Saturday’s action, starting at Turf Moor…

Still no fans at Turf Moor, sadly the area is in Tier 3, so that was a disappointment for the hosts, but they welcomed an Everton side who this is a rather unhappy place for them as they have suffered the most Premier League defeats at this ground losing four times out of six visits.  And incredibly the Toffees had not kept a clean sheet in 22 topflight fixtures at Burnley since a 2-0 win back in 1958!!! Blimey!

Sean Dyche was taking charge of his 200th Premier League match too, only the fourth to do so, but his side are the lowest scorers in the division this season and have attempted the fewest shots too, whilst Everton hadn’t kept a clean sheet in nine after keeping one at the start of the season at Spurs.

Burnley knew that a win here would take them out of the bottom three for a few hours at least, and they grabbed the perfect start when taking the lead after just three minutes when Robbie Brady smashed a cracking effort in from all of the twenty-five yards out, this after some sloppy play from Allan in midfield, seeing his square pass intercepted by Brady, and it was just the fifth goal the Clarets had netted all season.

It was also Brady’s first goal in over a year too.  But, the hosts could not see this lead through to the break as Everton levelled in the 45th minute as Allan, who gave the ball away for the Burnley goal, won the ball and played Richarlison in on the left and he flashed a cross into the box for Dominic Calvert-Lewin to slide in and nudge home from a few yards out.

Calvert-Lewin becomes just the ninth player to net in three consecutive Toffees PL away matches, and it was an important time to score right at the end of the half.  Both teams had great chances to net a winner in the second period but it ended all square, the first time they had drawn against each other in the Premier League in their 13th meeting, and it meant a point apiece for both sides.

Onto the Etihad now, and a meeting between Manchester City and Fulham, could the visitors build on that 2-1 win over Leicester City and stun a City side who had thrashed Burnley last time out…

City’s tally of fifteen points after nine games was their lowest since the 2008/09 season, but they were unbeaten in their last 39 Premier League home games against promoted opposition.  Fulham had lost 27 of their past 28 Premier League fixtures against the established top six teams, and they had won just two of their past four league matches, after taking just one from their opening six games.

No fans here too as Manchester is sadly in Tier 3, but wherever the fans were watching they would have been happy after just five minutes as City took the lead after the hosts were given far too much space and Kevin de Bruyne carved up the middle and played a perfectly weighted pass through to Raheem Sterling to slot past the keeper, it was way too easy and Fulham was already fearing the worst.

On 25 minutes City won a penalty after Sterling had wriggled into the box and saw Joachim Andersen catch him, and de Bruyne stuck it to the left of the keeper and the hosts were cruising, and they ended a dominant half of football two goals to the good.  Fulham had not been in the game at all and needed something for them to spark an unlikely recovery.

City almost added a third early in the second period but de Bruyne smashed an effort against the crossbar, and although Fulham gave it more of a go late on, they were well beaten here and remain just a point above the bottom three, whilst City climbed up to fourth in the table and after an unsure start to their season look to be hitting their straps now, incredibly that was the first time they had recorded back to back victories this term, crazy.  Watch out, everyone!!!

Off to London now and the Olympic Park in Stratford for the early evening game at The London Stadium, as West Ham welcomed Man United to the capital…

We had fans people, fans in the stadium for the first time in 271 days as 2,000 were allowed in for this one, and they would have been buoyed by the fact that after a run of eleven wins in twelve PL games against The Hammers, The Red Devils had just won just three of their last eleven against the hosts.  United had Edinson Cavani though, and he was starting in this one, and the striker had averaged a goal or assist every 32 minutes in the league so far this season, so West Ham certainly had to watch him.

Those in the stadium thought they had seen their side go ahead early on but Jarrod Bowen was clearly offside as he ran through to smash home, but the opening exchanges were a bit scrappy, but the hosts struck the woodwork late on in the half as Bowen, who was involved in all of the hosts attacking play, found Seb Haller who the found Pablo Fornals, and the latter saw a toe-poke hit the base of the post.

Seven minutes before the breakthrough West Ham did take the lead, as Declan Rice was left free to flick on at the near post and over Dean Henderson, and although Tomas Soucek was there to make sure, the ball looked to be going in anyway and the hosts had the advantage.  They could have added to their lead two at the end of the half on more than one occasion as United were all over the place at the back, but as it stood The Hammers were going third in the Premier League, whilst United would be in tenth.

United though knew they had avoided defeat in three of their last five PL away games when behind at half-time, but after seeing the hosts miss another sitter early in the second period, the visitors did level twenty minutes after the break-in controversial circumstances as after Henderson had boomed a massive clearance upfield to Bruno Fernandes, he pulled it back to Paul Pogba who whistled an effort in from twenty-five yards out.

The clearance from the keeper looked to have gone out of play though, but the linesman didn’t flag and although VAR checked the replays, they could not overturn it as there is no camera’s bang down the line, so the good standing.  With the hosts reeling Man United quickly went in front with another wonder goal as Mason Greenwood took a touch after a low cross from Alex Telles, spun around and then smashed in a low shot past Lukasz Fabianski, and just like that the visitors were ahead.

Marcus Rashford then hit the post, but he made no mistake with twelve to go when increasing United’s lead after a flick-on from Fernandes found Juan Mata who played a beauty of a ball over the top for Rashford to run onto from deep before eventually lofting over Fabianski to seal another brilliant second-half comeback.  It also meant United climbed above their city rivals into fourth.

The Blues knew a win would see them top the division for a few hours at least, whilst Leeds started the game only four points off Manchester City in fifth and Leicester City in sixth and a win here would see them jump from 12th to 8th.  The hosts had kept eight clean sheets in their last ten matches so that exciting Leeds attacking line would have to play well to break down a stubborn home defence, and they would be up against 2,000 Blues fans in the stands too, isn’t it nice to see fans back eh.

Well, four minutes in and Leeds had silenced the hosts, as Kalvin Phillips curled a lovely pass through to Patrick Bamford who rounded the keeper and slotted home, this after Oliver Giroud, fresh from his four goals in midweek in Seville, had almost headed the hosts in front, fine margins.  Chelsea then struck the woodwork after Timo Werner had poked an effort onto the crossbar, all this in the opening ten minutes in what was a frantic start to this contest, and just before the half-hour mark Chelsea were level when who else but Giroud converted at the near post after Reece James had fizzed a ball into him.

The Frenchman had netted in nine of his eleven PL starts this year, including in each of his last six outings, he was certainly a man full of confidence and in form.  Just beyond the hour mark and the hosts had turned it around after Kurt Zouma attacked a corner to thump a header home and as it stood they would be heading to top spot, but should Leeds of then had a penalty with eight minutes to go when Ben Chilwell caught Ian Poveda-Ocampo in the box during a build-up to an effort at goal, but he stayed on his feet and no penalty was forthcoming, VAR obviously deciding there was no foul play.

Had he gone down though maybe the outcome would have been different?  We will never know.  Three minutes into stoppage time and Chelsea sealed the points and top spot overnight at least when Timo Werner got in down the right and put it on a plate for Christian Pulisic to tap home from close range. 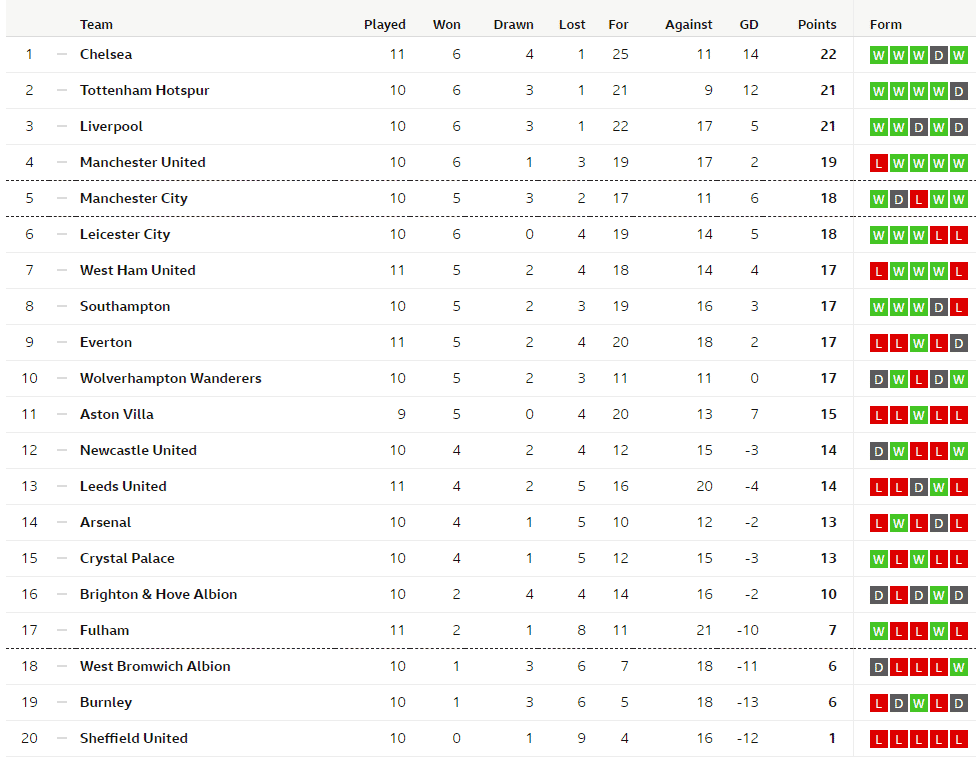 Chelsea led the way by a point ahead of tomorrow’s games, whilst both Manchester clubs have got themselves into the top five, Burnley’s point isn’t enough to take them out of the bottom three, whilst for Everton, their good start appears to be a distant memory after just one win in their last five.  Five points currently between first-placed Chelsea and tenth-placed Wolves, madness!!!

West Brom would climb out of the bottom three with victory over Palace, Leicester could go into top four with a win, whilst Spurs and Liverpool could join each other at the top once again with wins too, although if Wolves win at Anfield they could leap up six places to fourth themselves, promises to be an exciting Sunday in the Premier League. 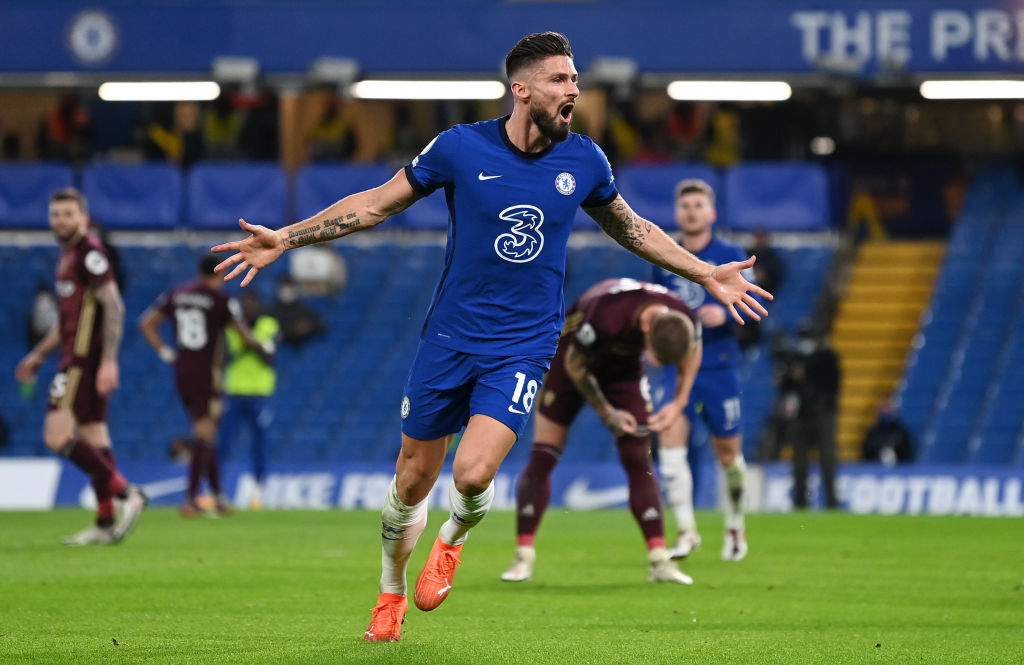