Round 3 of Super Rugby Trans Tasman once again saw five Australian sides facing off against 5 teams from New Zealand. So far, the New Zealand franchises have been significantly superior, registering 10 wins from 10 in what has so far been a once sided competition. With heavy scrutiny now upon them, would the Australians fair any better 3rd time around?

For the first time in 15 matches, an Australian team finally mustered a victory against New Zealand opposition. The Reds brought the perfect record for New Zealand teams to an end, beating a Chiefs side who spent much of the game with only 14 men.

Things were all square after 15 minutes, until a yellow card for Chiefs winger Chase Tiatia, combined with a penalty try for a deliberate knock on, was followed by a straight red card for fly half Damien McKenzie after he made contact to the head of Reds scrum half Tate McDermott.

The sending off of McKenzie allowed the floodgates to open, and at half time the Reds held a commanding 33-3 lead over the men from Waikato. A late Chiefs charge in the second half brought them within one score of the Queenslanders. However, on this occasion it wasn’t enough and the Reds held on for a well-deserved victory.

In the other matches, it was one-way traffic again, with the four other Kiwi sides notching up an impressive 177 points, each with a four try bonus point.

On Friday, the Hurricanes put on a masterful display against the Western Force, scoring 7 tries to none. Among these were a few absolute crackers, including Hooker Asafa Aumua’s 60m solo effort, and Winger Salesi Rayasi’s acrobatic finish to evade the attempted tackle of Rob Kearney.

The Crusaders continued their dominance against the Waratahs, whose winless streak was extended further. The Sydney-based side were never able to get a foothold in the game, and even when the Crusaders had a man in the bin, they were unable to capitalise, conceding two tries whilst a man up.

Elsewhere, the Highlanders got off to a blistering start against the Rebels, with Michael Collins regathering an Aaron Smith chip to crash over inside 2 minutes. The Rebels put up some spirited resistance, hitting back with 2 tries of their own and going into half time only 14-12 down. However, a yellow card for the Melbourne club cost them three unanswered tries, and despite a late fight back, they were unable to register their first victory in the competition.

Finally, the Blues played host to the Brumbies in a contest which was neck and neck throughout the majority of the first half. However, following an incisive break by speedster Reiko Ioane, scrum half Finlay Christie was on hand, beating countless Brumbies defenders to scoot over the try line for a critical score before half time.

After this it was all one way traffic, with the Blues physically dominating the team from Canberra and restoring their position at the top of the Super Rugby leaderboard.

Based on the next round of fixtures, I expect to see the New Zealand franchises return to a clean sweep of victories against their Aussie counterparts. The Chiefs suffered a setback against the Reds in round 3. However, with their next fixture against the Melbourne Rebels who are currently sat bottom of the Super Rugby Trans Tasman table with 0 points from 3 games, the Chiefs will have the perfect opportunity to get back to winning ways.

Elsewhere, I don’t expect the Crusaders to struggle against the Western Force, whilst the Hurricanes and Highlanders will both be full of confidence going into their matches with the Brumbies and the Waratahs respectively. Despite their victory this weekend, I think the Reds will face too great of a challenge against the Auckland-based Blues, whose red-hot streak of form just keeps going.

What do you think of my predictions? Please comment below with your thoughts on the upcoming round of Super Rugby Trans Tasman fixtures. 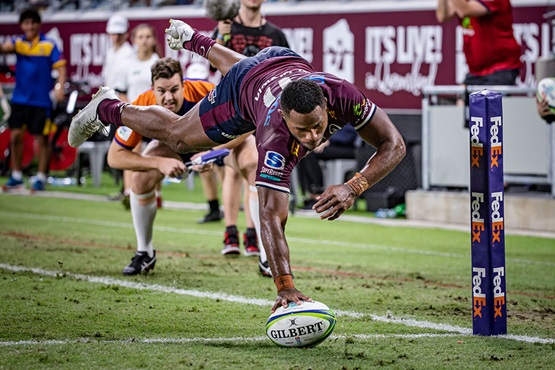