In the winter of 2006, I was a fourteen year-old-high school freshman. My main concern was making sure the older guys on the basketball team believed I belonged on the senior team as much as the coaches did. Even though I was just a freshman, I was not going to let the older guys push me around. My usual layer of protection, my older brother Marcus, was away pursuing his own dreams as a freshman in college. Up until then, nobody dared mess with Marcus Brown’s little brother; now I was on my own.

However, when Marcus returned home for winter break, it gave me a chance to cross-examine him about college life. Like most standout college athletes, he’d chosen to get as far away from Chicago as he possibly could. I had never even been to California; I couldn’t wait to grill him about what it was like to live there.

His two best friends, Elliott and Kevin were also great athletes. Marcus was a track and field star who specialized in the 100-meter dash and the 4X4 100-meter relay. Elliott and Kevin played baseball. All three of them had been offered partial academic and athletic scholarships to the same school, and off they went like the three musketeers.

Of course, once they got back to Chicago, they didn’t let me tag along everywhere, but I’ll never forget the night they treated me like one of the guys. Instead of going to a local party, they ordered pay-per-view at our house and stayed in to watch an event they were excited about. I asked Marcus what all the excitement was about. “We’re watching the UFC tonight,” he said with obvious anticipation. “What is the UFC,” I asked incredulously…

Growing up with the sweet science

To understand the impact my first experience with mixed martial arts had on me, you’ll have to understand more about our upbringing. Growing up, being able to “throw your hands” was just part of our culture. Because I was designated as a basketball player early on, I never got to officially compete in the Golden Gloves, the premier amateur boxing circuit in the United States.

However, several of my friends were avid boxers and some did get the chance to compete. On the weekends, we would put on gloves that some mischievous soul had stolen from the gym. That’s when we would have our own makeshift boxing matches in the alleys or the backyard. Although it was ill-advised and unsanctioned, that was the environment we grew up in and it seemed normal to us at the time.

Every time there was a major boxing event, someone in the neighborhood would get it on pay-per-view. Growing up in the early 2000s, the premier boxers were Oscar De La Hoya and Lennox Lewis. Every time one of them had a fight, I would be watching, along with the rest of the neighborhood.

When Hasim Rahman knocked out Lennox Lewis with the luckiest punch he’d ever thrown, it was the equivalent of earlier fight fans witnessing Douglas defeat Tyson; no one in Uncle Juke Box’s living room could believe what we just saw. The next day, Rahman’s surprise victory was all anyone talked about. Although basketball and American football were the sports I concentrated on, boxing had a grip on everyone in my surroundings, including me.

My friends and I took our love of boxing beyond just the pay-per-view bouts the adults in the neighborhood would let us watch in the living room. One by one, we made sure to watch all five of the films in the original Rocky series even though they were released before any of us was born.

Films like Rush Hour starring Jackie Chan and Exit Wounds featuring Steven Seagal were also big hits with us. When DMX and Michael Jai White performed fight scenes in Exit Wounds, it was the first time any of us had seen an African American perform martial arts. Prior to that, we’d only seen Black men box. It opened our minds to a whole new world of possibilities.

Immediately hooked on the sport

That night in December of 2006, my older brother Marcus and his two friends made sure to watch the entire main card of UFC 66. I had never seen anything like it before. I imagined it would be something like a scene out of Karate Kid. Instead, I saw grown men in a caged octagon who were permitted to punch, kick, elbow, execute takedowns and use chokeholds.

I couldn’t believe it; I was an immediate fan. My only embarrassment was when I learned this had been going on for years and I was learning about it for the first time that night. How could I have missed out for so long?

When Andrei Arlovski knocked out Márcio Cruz with a flurry of punches in the first round of their fight, I distinctly remember everyone in the room breaking out into an impromptu round of applause. That was followed by high fives, exchanged around the room. The energy was absolutely electric; you would have thought we were all sitting ringside! From that point forward, I knew this was a sport I had to follow. The combination of skill and aggression was perfect. I was hooked.

All throughout the night, Marcus and his friends kept relating stories to me about Chuck Liddell and Tito Ortiz. I was enthralled with their story. Ortiz had been the light heavyweight champion, a man who everyone thought was invincible. He was the first megastar the UFC produced and he was the most marketable character in mixed martial arts.

Chuck Liddell, on the other hand, was not nearly as celebrated as Ortiz. He was seen as a very good fighter, but lacked the charisma or mainstream appeal to become a star. However, Liddell had been kicking Ortiz’s behind in sparring matches for years; that was the worst kept secret in the sport. Eventually, Liddell became the champion after Ortiz unexpectedly lost his belt to a fighter most people considered to be “over-the-hill.”

After Liddell became the standard-bearer for the division, he did for Ortiz what Ortiz had refused to do for him. He gave his former sparring partner a title shot. He subsequently defeated Ortiz on the biggest stage the sport had to offer. Chuck Liddell was the best fighter in the light heavyweight division. No longer was this a widely held opinion; it was a statement of fact.

By the time my brother and his friends shared all of this with me, my excitement was at a fever pitch. Two former sparring partners, who’d both been crowned champion at one point or another, were heading into a rematch for the undisputed championship. It was too good to be true. I wish I could tell you that my ability to analyze a fight was as sharp at the age of fourteen as it is now. Unfortunately, that would be a lie. I remember Liddell and Ortiz going back and forth that night, and I remember each of them having their moments.

To say I can provide in-depth analysis from an event that took place in 2006 would be a stretch you most likely wouldn’t believe anyway. However, what I distinctly remember was the referee stopping the fight in the third round after a flurry of punches by Liddell. I remember the excitement in the arena and the excitement in the living room that night. It was a thrill I knew I wanted to experience as often as I could from that point forward.

What does it all mean?

My story of being introduced to the UFC at the age of fourteen is just one example of how a sport many predicted would die out caught on with viewers around the world. Today, the UFC is viewed on every continent on the globe with participants from every country on the map. The sport’s staying power has everything to do with its appeal. Combat sports are as old as mankind. There are hieroglyphics on the walls of Egypt that depict two warriors in a wrestling match.

2006 was a long time ago; today I am just as big a fan of the UFC as I was all the way back then. The only difference is that my understanding of the sport, the strikes, the kicks, the submissions holds, is much greater than it was then. Now that I understand that these competitors are skilled athletes and not just combatants looking to express their aggression, my appreciation for what they do has grown.

If you’re among the few people who have not taken the time to watch the beauty and excitement of mixed martial arts, I strongly recommend that you do. If you love competition, suspense and excitement, this sport has it all wrapped into one. Give it a chance and you’ll become a fan the very first time. Mixed martial arts is here to stay; it has earned its seat at the table. It’s time we all recognized this sport for what it is, a reflection of human nature presented as a sport and turned into an art form. 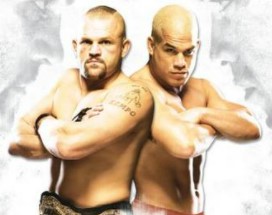