For the first time in history, Bangladesh defeated Australia in a test match after the No.1 all-rounder of the world, Shakib Al Hasan stunned the mighty Aussies with his fiery spin, taking 10 wickets over the course of two innings.

Tamim Iqbal scored half centuries in both the innings

Australia fought hard in the second innings and were looking to snatch the victory away when Warner and Smith built a partnership of 130 runs for the third wicket. However, Shakib picked up both the crucial wickets giving the Tigers the much needed confidence. Wickets kept falling gradually and in the end, Bangladesh defeated Australia by 20 runs.

Earlier in the game, Bangladesh won the toss and opted to bat first. By the time Bangladesh lost the first three wickets, they were only able to add 10 runs on the scoreboard. Pacer Pat Cummins sent Soumya, Imrul and Sabbir back to the pavilion in quick intervals. Shakib and Tamim provided resistance, adding a partnership of 155 in the fourth wicket. Tamim’s brilliant knock of 71 was brought to an end when he was caught by Warner from Maxwell’s delivery.

Lyon picked up Shakib’s (84) wicket and Agar sent Mushfiq back to the dressing room as Bangladesh were struggling again at 198/5. A 42 run partnership by Miraz and Nasir in the seventh wicket slowed the proceedings down for the Aussies but Lyon and Agar got rid of both the batsmen respectively as Bangladesh were all out for 260 in the first innings. Cummins, Agar and Lyon picked up three wickets each while Maxwell picked up the important wicket of Tamim.

Nathan Lyon piled up pressure upon the Tigers

In reply, Australia lost their first four wickets after only being able to score 33 runs. Warner, Khawaja, nightwatchman Lyon and skipper Smith all departed as Miraz and Shakib started their spin-storm. Handscomb and Renshaw built the innings, adding 69 runs in the fifth wicket before Taijul picked up Handscomb’s wicket. Shakib and Miraz got rid of Renshaw, Wade and Maxwell as Australia were struggling at 144/8.

Tail-enders Cummins and Agar added 49 runs in the ninth wicket before Shakib got rid of Cummins. A 24 run partnership between Agar and Hazlewood also ended when Shakib picked up his fifth wicket of the innings, sending Hazlewood to the pavilion. Australia were all out for 217 as Bangladesh gained a decent lead of 43 in the first innings. Shakib picked up five wickets while Miraz and Taijul picked up three and one wickets each.

In their second innings, Bangladesh started off well as the openers added 43 runs on the scoreboard. But they lost their first three wickets in quick intervals before Mushfiq and Tamim added 68 runs in the fourth wicket partnership. Tamim scored 78 runs before Cummins picked up his wicket. Lyon sent Shakib packing quickly but Mushfiq and Sabbir provided resistance, adding 43 runs in the sixth wicket partnership.

Australia regained momentum after picking three wickets rapidly as Bangladesh’s score was stuck at 186. Shafiul and Miraz withstood the onslaught, adding 28 runs in the ninth wicket partnership before Lyon removed Shafiul from the crease. Lyon picked up Miraz, his sixth wicket of the innings shortly afterwards as Bangladesh were all out for 221 in the second innings. Agar picked up two wickets while Cummins picked up one.

Chasing a target of 265, Australia started off on a shaky note as they lost their first two wickets after adding only 28 runs on the scoreboard. But Warner and skipper Steve Smith posted a partnership of 130 runs in the third wicket and looked to turn the tide around for Australia. Warner scored his maiden test ton (112) on Bangladeshi soil and Smith patiently held things together at the other end.

At the start of day four, things were starting to look bright for Australia. However, Shakib Al Hasan stepped up yet again, removing both Warner and Smith from the crease to shift the momentum in favor of Bangladesh. The middle order of Australia crumbled in front of the fiery spin of Shakib, Miraz and Taijul as Australia went from 157/2 to 199/8.

Sensing defeat, Lyon and Cummins added 29 runs in the ninth wicket, attempting to limp their way towards the finishing line. At 228, Miraz finally got rid of Lyon. Cummins still fought the Bangladeshi spinners along with an injured Hazlewood but their resistance was short-lived as Taijul picked up Hazlewood’s wicket. Australia’s innings ended at 244, 21 runs short of victory.

At the presentation ceremony, Bangladeshi skipper Mushfiq praised the batting of Shakib and Tamim as well the bowling of his spinners, crediting them for the win. Aussie skipper Steve Smith accepted defeat saying that his team failed to stick to their game-plan and lauded Bangladesh for their performance. Man of the match, Shakib Al Hasan thanked the crowd for their never-ending support and told the crowd that it was his wife who believed in him and told him the previous night that they would win.

Bangladesh has now won a test against England, Sri Lanka and Australia within the last one year. As the Tigers keep roaring their way forward in the game, they have the unique opportunity of winning a test series against Australia, who have been subpar with their performance on Asian soil. Bar the first test victory vs India earlier this year, they have lost a lot of games and will need to come back stronger in order to save the series.

The second test will be held in Chittagong from September 4-8, 2017. With everything at stake, Australia will enter the match with a do-or-die attitude whilst the roaring Tigers will patiently wait to snatch another victory and a historic series win against them. 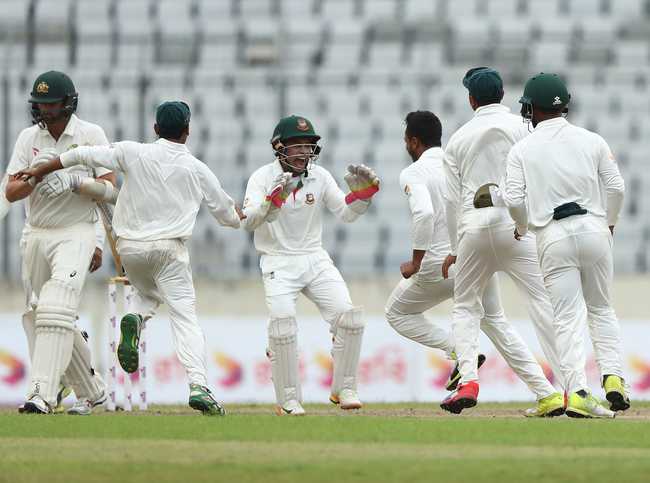