Country music artist, Billy Ray Cyrus had a hit single titled “Achy Breaky Heart” that was dominating the charts across all genres. An up and coming comedian by the name of Chris Farley was beginning to have breakout success on the sketch comedy show Saturday Night Live, and incumbent U.S. President George H.W. Bush was expected to have an easy victory in November over the presumed Democratic, nominee Bill Clinton. Meanwhile, the heavyweight champion of the world was Evander Holyfield and his arch-rival was… 42-year-old former champion Larry Holmes?

Such was the sad state of affairs in the heavyweight division in the summer of 1992. Although Larry Holmes was already a legend by then, to think that he was the number one contender in the world after having retired twice during the 1980s was depressing for any lover of the sport.

For his part, Holyfield was still highly scrutinized by the public, largely seen as the benefactor of Mike Tyson taking Buster Douglas lightly. In fact, many still viewed “Iron Mike” as the best heavyweight in the sport. However, he’d recently been sent to prison on a rape conviction thus making the highly anticipated match between him and “The Real Deal” null and void.

When Evander Holyfield did finally climb into the ring with the 42-year-old Holmes, the two of them put on a snooze-fest that resulted in a unanimous decision for the champion. Those who paid to watch the fight on Sky Sports and HBO regretted the decision. A night on the town would’ve made a better Saturday night than watching a sparring session billed as a boxing match.

In the sport of boxing, a fighter who can carry a fight card is worth his weight in gold. There are fighters who can sell out arenas, inspire pay-per-view purchases and generate a buzz felt by the entire world of sports. While stars like Anthony Joshua, Errol Spence and Tyson Fury have become household names, the sport is always looking for the up-and-comer who will take the reigns and carry the weight of the sport for years to come.

Every generation has its own collective of fighters who share in the responsibility of making sure the popularity of the sweet science does not wane. On Saturday night, Bob Arum’s young phenom, Shakur Stevenson put on a masterful performance in the main event, revealing to the world that he is among the next generation of fighters who will carry the sport.

Shakur Stevenson’s first fight at junior lightweight came on June 9th against Felix Caraballo. The southpaw was able to knock down his opponent twice, the second of which led the referee to stop the fight, giving him a TKO victory. At the time, Stevenson was still the WBO featherweight champion despite moving up to in weight to fight Caraballo in a non-title fight.

However, a month later on July 9th Stevenson announced he would be relinquishing the title to move up to the junior lightweight division full time. His dominance over the well respected Caraballo was enough to convince him that it was time to move up and challenge the growing list of fighters jockeying for supremacy at 130 pounds.

At only 23 years old he is very marketable

Ideally, every sport will have surefire future Hall of Famers who are active at the same time as rising stars. Los Angeles Angels superstar center fielder Mike Trout won his first American League MVP during legendary New York Yankees shortstop Derek Jeter’s last season. The overlap in their careers is the ideal transition; as one wave of superstars career’s come to a close, the next wave establishes themselves and carries the torch.

Fortunately for the sport of boxing, this is exactly the current state of affairs. From Anthony Joshua walking to ringside to speak to a congratulatory Floyd Mayweather after his defeat of Kubrat Pulev, to Manny Pacquiao being spotted leaving the arena after Errol Spence’s victory over Mikey Garcia, boxing’s current landscape has a great mix of proven warriors and hungry young lions.

That’s what made Teofimo Lopez’s victory over Vasyl Lomachenko in October so special; Lomo is a legend but the night belonged to the burgeoning superstar.

Enter into the mix Shakur Stevenson. The 23-year-old former Olympian has not only won a world title, but he’s stated he aims to earn another one at the junior-lightweight division before the end of 2021. His lack of hesitancy in stating that he’s already one of the best in the weight class despite only having two fights under his belt speaks to his confidence. It’s the type of bravado, combined with the elite speed and deceptive power he possesses that makes Stevenson one to watch in 2021 and most likely for years to come.

In Saturday’s dominant performance over Kahn Clary Stevenson displayed his cumulative power. As the fight wore on, his persistent bodywork zapped Clary of all energy to the point where he was barely punching back by the ninth and tenth rounds. While he doesn’t possess the remarkable punching power of a phenom like Edgar Berlanga, Stevenson does have the ability to wear down his opponents over the course of a fight.

He’s also a superior defensive fighter, able to avoid big shots from his opponents. Some have even compared him to the great Floyd Mayweather. While Stevenson still has a long way to go before he’s on the level of the best defensive fighter of all time, his ability to avoid punches was almost an insult to Clary and his camp on Saturday night.

The best is yet to come

The most exciting aspect of Shakur Stevenson’s decision to move up from featherweight to junior lightweight is that it opens up the possibility for so many interesting match-ups heading into 2021. Jamel Herring is scheduled to defend his WBO junior lightweight title against Carl Frampton early next year, and on Saturday Stevenson publicly stated he wants to face the winner of that bout.

He’s also rumored to have his eyes on WBC champion Miguel Berchelt. Having two wins and no defeats under his belt in 2020, it’s not unthinkable that Stevenson could duplicate that effort in 2021 and win two world titles along the way.

Despite all of the shenanigans surrounding the sport as of late, the current state of affairs in boxing is great. There is renewed interest in the heavyweight division, battle-tested veterans and exciting up and comers. By delivering excellent performance in Top Rank’s showcase on Saturday night, Shakur Stevenson showed that he is another headline act who can be trusted to give fight fans what they came to see when booked as the main event.

Fight fans the world over should be grateful to men like Eddie Hearn, Bob Arum and Al Haymon who’ve made sure boxing has remained relevant in the most trying year this generation has ever seen.

To pull off these impressive events, fighters like Anthony Joshua, Terrence Crawford and Errol Spence have had to step up and perform. On Saturday night, Shakur Stevenson added his name to the list. Heading into 2021, the future of boxing looks as bright as ever. 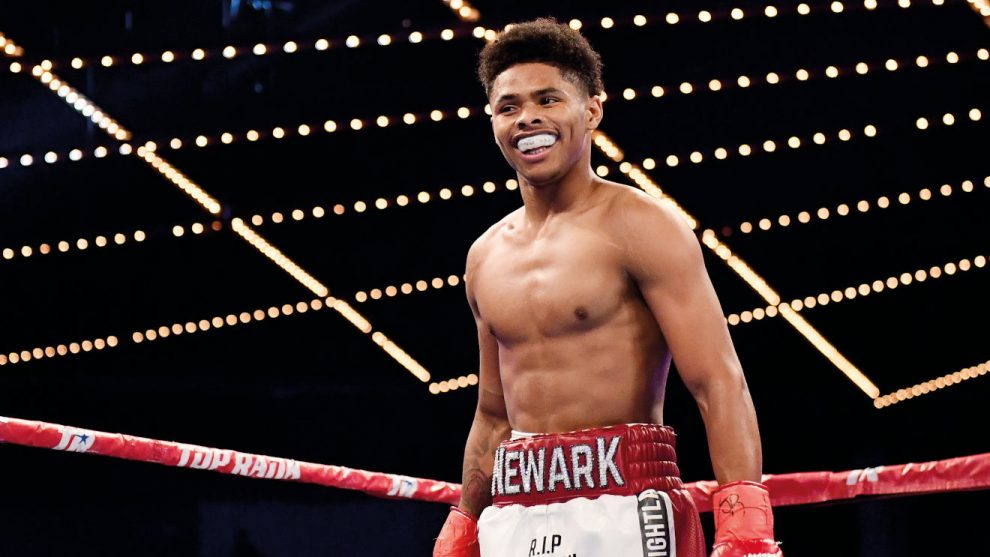