Spinners Nathan Lyon and Steve O’Keefe (SOK) shared all the 10 wickets of India’s second innings as Australia won the first test of the 2017 Border-Gavaskar Series by 333 runs. With a magnificent bowling figure of 12/70, O’Keefe was declared the man of the match.

Heading into the 1st test, India were dubbed as the favorites to win the series in a convincing way. Former Indian spinner, Harbhajan Singh even claimed that if Australia performed at their level best, they would still end up losing the series 3-0. However, everything changed as the 1st test progressed.

In reply, India could only manage to score 105 in their first innings. SOK ran riot through the Indian batting lineup, picking six wickets for only 35 runs. Meanwhile, skipper Virat Kohli went for a duck for the first time in a test match on Indian soil, after he was edged from a full and wide delivery by Starc.

Australia struggled at the start of their second innings as they lost both the openers, Warner and Marsh with just 23 runs on the scoreboard. Captain Steve Smith along with Peter Handscomb steadied their innings. Australia ended day 2 with 143/4 on the scoreboard, losing two more wickets as Smith posted a fifty (59*).

Smith scored his maiden century on Indian soil (109 runs from 202 balls) during the first session of day 3. It was a brilliant knock and he was very cautious in his approach throughout the innings, picking only the loose balls for scoring the boundaries. Wickets kept tumbling but Starc once again scored a quick 30 off 31 balls, adding more runs to the scoreboard.

Australia were all out for 285 just before lunch. Ashwin picked up four wickets, but gave away 119 runs while Jadeja took three wickets. India were set a huge target of 441 runs in the 4th innings, an almost impossible feat to achieve.

After lunch, things went from bad to worse for India. Chasing 441, they lost both their openers Vijay and Rahul after only scoring 16 runs. Kohli and Pujara were starting to settle down before the Indian skipper was bowled by a brilliant SOK delivery which did not turn and hit the stumps. At tea, India were 99/6, already facing defeat as O’Keefe picked five of those six wickets.

In the third session, Australia wrapped up the test as India were all out for 107. O’Keefe once again bagged six wickets for 35 runs while Lyon picked up the remaining four wickets. Overall, the Australian spin duo picked up 17 out of the 20 wickets of India in this test.

At the presentation ceremony, Indian skipper Virat Kohli said that his team got outplayed by the Aussies and their batting display was the worst in the last two years. He further added that India had two very poor sessions in the match and recovering from such situations against a quality side like Australia is always difficult.

Australian captain Steve Smith remarked that it was a bonus to win the toss and he was really proud of the way the team played throughout the match. He also pointed out that it has been 4502 days since Australia last won a test in India and praised SOK for his outstanding performance.

Man of the match Steve O’Keefe noted that the ball skidded more than it spun and it was the hard work of the Australian batsmen that prevented them from being edged to the Indian spinners.

Australia fielded very well and the players held on to the difficult catches and edges by the Indian batsmen. The Indian fielders, however, dropped a lot of easy catches and their fielding throughout the match was below par. Moreover, the individual performances of Smith, Renshaw and Starc with the bat as well as Lyon and SOK with the ball were the deciding factors between the teams.

With this mammoth victory, Australia lead the series 1-0. They will play the 2nd test at Bangalore from 4-8 March. India will be desperate to score a victory there since a defeat will result in Australia retaining the Border-Gavaskar trophy. 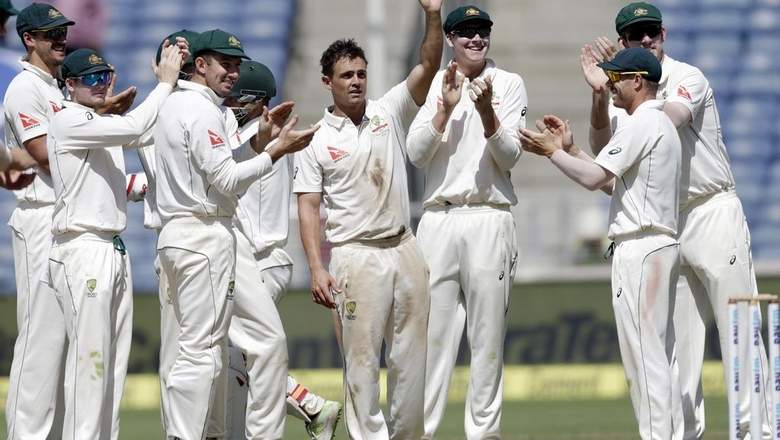