Day Three at the Masters began just like Day Two, with players looking to complete rounds leftover from the previous evening as the tournament was still playing catch up from the weather delay early on Day One.

Rahm duly joined DJ and JT at the top meaning it is the first time in major history that the top three have all been tied for the lead in any round as another record was written in a record-breaking week already.  It also meant a five-way tie at the top with Ancer & Smith completing the halfway leaders.

There was just as much drama at the cut line too, and Bryson was scrambling to make the cut, this after he was saying before the competition that this was a par 67 for him, well Augusta almost had the last laugh but although he bogeyed the final hole to end level par, it was just enough to squeeze into the weekend.

This also allowed players like Morikawa, current USPA champ, of course, Fitzpatrick, Spieth (2015 Masters champ) and Finau to also squeeze through on level par, think they all owe Bryson a drink for that, as had he parred the final hole then all the players at level par would have missed the cut.

(Something that I found out today was Bryson had a scare after round one after he felt unwell so had to have a Covid-19 test, thankfully this came back negative so he could continue his tournament.)

Spieth himself had to hole a particularly long putt for par at the final hole to make it into the weekend, it was definitely what you call a ‘clutch’ putt but could this be a turning point for him going forward after what has been a pretty tough period in his career after such a fast start winning all those majors and titles.

So, at the start of Round Three, we had five players tied at the top, the top ten separated by one shot, and the entire field only separated by nine!!!

It certainly set up a very intriguing and no doubt exciting weekend, and ‘moving day’ would no doubt throw up some more drama/excitement too.

So what were the highlights of Day Three then?

Well, look no further than World Number One Dustin Johnson, DJ to many of course, who set the tone early on in his Third Round after an eagle at the second and birdies at three and four as he put together a faultless round of 65 to build up a four-shot lead over the chasing pack.

His sixteen under par score equals the 54 hole record set by Jordan Spieth in 2015, and if he shoots at least three under in his final round he will beat the record over 72 holes that Jordan set on his way to winning the Green Jacket five years ago.

He was in a class of his own today and definitely showed why he was World Number One and one of the favourites to win this comp before a ball was hit.

So what of his challengers, well Jon Rahm, world number two, was going along nicely until the eighth hole when he topped his second shot from the middle of the fairway into the forest and ended up carding a double-bogey seven, and he never really recovered from this and sits seven back from DJ now, so it looks unlikely he will grab the green jacket tomorrow.

World Number Three Justin Thomas also faltered and will start his final round six back after a round of 71 and need a pretty low round and a poor one from DJ to have any hopes of winning this Masters that is for sure.

The other two players tied for the lead coming into this round were Abraham Ancer and Cameron Smith, and they are still in the mix although four back in a three-way tie for second with Sungjae Im.

As I said the other player in a tie for second at twelve under is Sungjae Im, who is bidding to become the first Asian player to win the masters.  He plays the most amount of golf out of anyone on the PGA Tour and doesn’t even own a property as he just lives out of hotels week in week out, amazing, and as he says he is living the dream.  It would be a fantastic story if he could pull it off.

Apart from DJ’s 65, the other two low rounds today saw South African Dylan Frittelli hang in the mix with a brilliant 67 to leave him five back in fifth place, whilst Rory McIiroy shot a decent round for the second day in a row, also a 67, to leave him on eight under down in a tie for tenth, but at eight back it looks very unlikely he will be wearing that green jacket come tomorrow evening.

If only he had not shot that 75 in round one, otherwise he could have been right in the mix tomorrow.

Nobody else could really leap out of that pack though on Day Three so the only real winners are to come from the top six, with six shots separating them.

The likes of Im, Ancer, Smith, Frittelli and Thomas will need rounds of their lives to win this thing though and hope that DJ falter, which doesn’t look likely after today, but this is Augusta so you just never know.

A quick mention for the Amateurs, Andy Ogletree sits T-36th on two under after three rounds and leads the only other Amateur to make the cut, John Augenstein, who is a further two shots back so the race for the Top Amateur will be on tomorrow between those two.

I couldn’t end this article though without mentioning the oldest man to make the cut at The Masters, Mr Bernhard Langer, who sits T-36th on two under par, which for a 63-year-old is quite remarkable and above the likes of Ricky Fowler, Tony Finau, Jordan Spieth, Matt Fitzpatrick, Phil Mickleson and many others, so it really is something special from the German.

So DJ in the driving seat to claim his first-ever Green Jacket, it’s his to lose, but can he finish the job tomorrow? 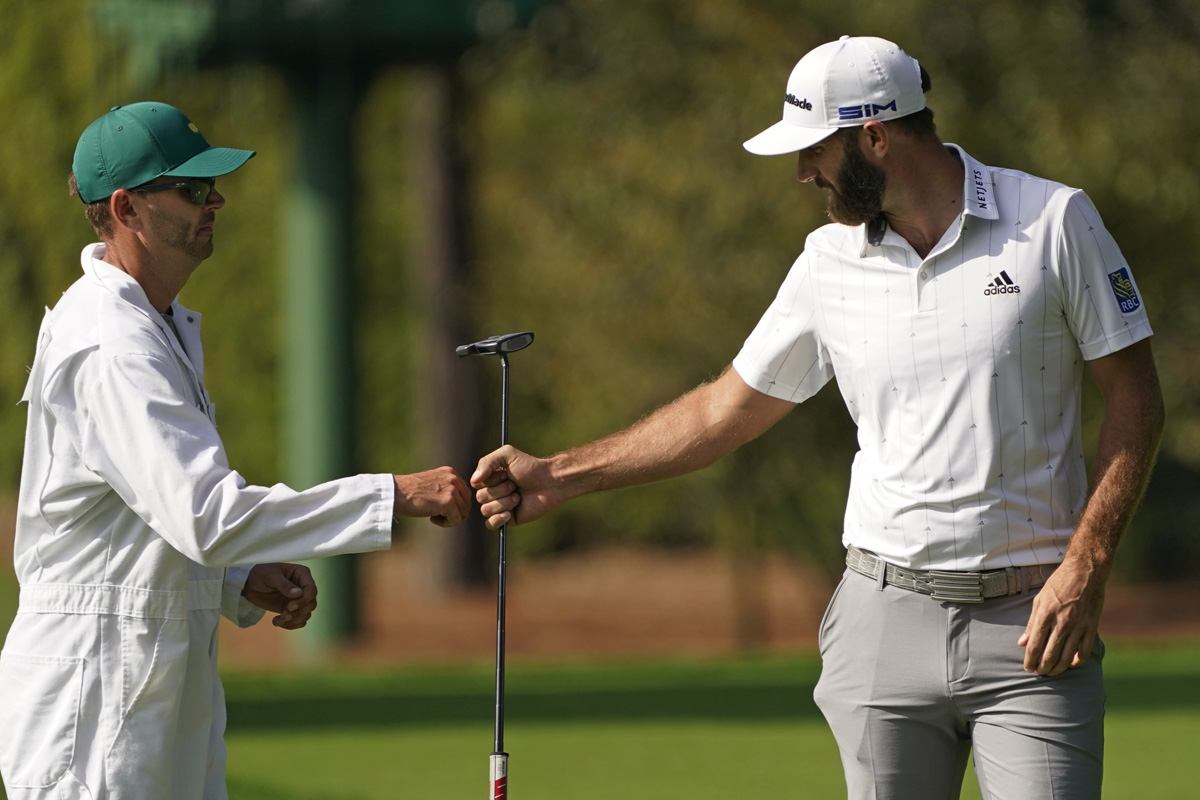