Another marvelous century from Harry Brook helped England to a valuable lead over Pakistan on the second day of the third Test in Karachi. Brook’s century came after rescuing England from the slightly precarious position of 98-4, eventually helping propel England to a score of 354, a lead of precisely fifty. It was another compelling day of cricket in what has been a riveting series; Saatchi & Saatchi would struggle to produce a better advert for Test cricket. Brook was instrumental in giving England control on a day where the momentum swung back and forth, as Pakistan’s spinners skilfully exploited the turning conditions, especially during the morning session.

England began the day well; both Ben Duckett and Ollie Pope were especially dismissive of a brief period of seam bowling from Mohammad Wasim and Faheem Ashraf, who ended up bowling just one over all day, posing further questions about Pakistan’s selection policy. The confidence initially continued against the spinners, both batters using their feet effectively and bringing up England’s fifty in the tenth over. But Nauman Ali changed the complexion of England’s innings in the fourteenth over, taking two wickets in two balls; first pinning Ben Duckett LBW to one that skidded on and then removing Joe Root, well caught at first slip by Salman Agha. Root has had a rare quiet tour, but his Yorkshire team-mate Harry Brook has been anything but quiet, and he continued his superb form, batting with confidence and authority, his footwork against the spinners a joy to behold. Brook has had an outstanding tour and has arguably demonstrated the potential advantages of exposure to franchise cricket; on evidence, his spell in the PSL has certainly helped him, exposing him to the kind of wearing surfaces that you’d struggle to find on the county circuit.

Pope has had a similarly strong tour and reached yet another fifty, batting in a busy manner that’s becoming a more than passable imitation of Root. Pope looked at ease, and it took something special to dismiss him. In his short Test career, Abrar Ahmed has shown a propensity for the magical, and he produced an absolute ripper to bowl Pope, leaving England 98-4 and Pakistan in control. Stokes came in and batted with the positive mantra he espouses, playing some typically powerful shots as he and Brook took England to lunch in optimistic spirits after a pulsating morning of cricket.

The potential of an afternoon session of Brook and Stokes creating carnage never materialised, a horrible mix-up resulting in the run out of the England skipper after some excellent work on the boundary by the veteran Azhar Ali. Stokes’ wicket left England 145-5 and the match interestingly poised, with Ben Foakes coming to the crease for the first time in the series. England have shown an ability throughout the series to turn the momentum when needed, and today was no different, Brook and Foakes adding a crucial 117 for the sixth wicket. Brook reached his third century in as many matches and became the first Englishman to score three centuries in Pakistan. It was another excellent innings; Brook has found the perfect balance between attack and defence, his intent aggressive but never reckless. Foakes batted in his usual unflustered manner, again demonstrating his value to England after a flawless keeping performance yesterday.

Brook was eventually dismissed by Mohammad Wasim, plumb LBW, as Wasim started to find some reverse swing with the old ball. Rehan Ahmed quickly followed, perhaps slightly too cavalier in his first Test innings, caught at mid-wicket trying to hit Nauman Ali over the top. It’s another indicator of the no-fear environment McCullum and Stokes have fostered, however, when an eighteen-year-old debutant feels comfortable enough to try and play his natural game, safe in the knowledge of no retribution. Mark Wood came in and played one of his useful little cameos, the kind that his teammates love, and that irritates the hell out of the opposition, as he and Foakes added 51 together and took England into the lead. Both he and Foakes fell in the space of a couple of overs, the latter making an important 64, batting in a sensible manner, recognising the situation, and happy to be the foil for his perhaps more extravagant-minded partners. Ollie Robinson came and clubbed a quick-fire 29, and Abrar Ahmed briefly bamboozled Leach before bowling Robinson and leaving England all out for 354, a lead of 50.

Pakistan were left with a tricky few overs to negotiate before the close of play, with the shadows creeping in. England stuck to spin, just like the hosts, but Shan Masood and Abdullah Shafique stood firm, and Pakistan finished the day 21-0, trailing by 30. England’s spinners face a big day tomorrow on a pitch that turned considerably more than yesterday. Chasing anything over 150 would be tricky in such conditions, and Pakistan will feel they still have the chance to claim a morale-boosting win if they can avoid the batting implosions which afflicted their first innings. 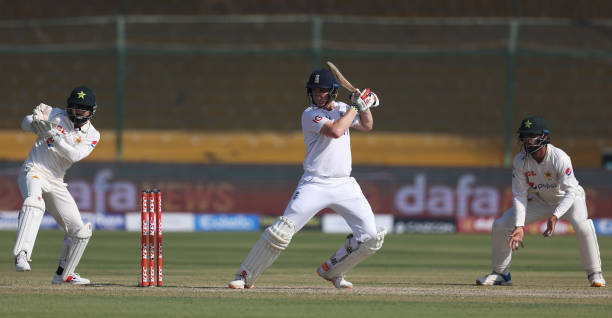