Debutant Rehan Ahmed picked up two wickets as England bowled out Pakistan for 304 on the first day of the final Test in Karachi. Ahmed, England’s youngest-ever debutant at 18 years and 126 days- breaking Brian Close’s 73-year-old record- wasn’t even born when England last won in Karachi; under the captaincy of Nasser Hussain, who presented Ahmed with his cap. Ahmed’s wickets, combined with another four-wicket haul for Jack Leach, have put England in a strong position in the Test match despite the dismissal of Zak Crawley late in the day as England closed the day on 7-1.

Understandably, with an unassailable lead in the series, James Anderson has been given a deserved rest, paving the way for Ahmed to make his debut, while Ben Foakes also earned a recall at the expense of Will Jacks. Pakistan again made several changes, recalling the veteran Azhar Ali, who announced yesterday he would retire from Test cricket after the match, while Shan Masood replaces the injured Imam Ul-Haq. Ben Stokes made his first mistake of the tour when he miscalled at the toss, and Pakistan’s skipper Babar Azam had no hesitation in choosing to bat.

In the absence of Anderson, Jack Leach shared the new ball with Ollie Robinson, and it was Leach who provided an early breakthrough, trapping Abdullah Shafique LBW with one which skidded on. Shan Masood, who enjoyed a fruitful summer in County cricket with Derbyshire, looked in good touch until he lazily top-edged a Mark Wood delivery down to Leach at fine leg. Azhar Ali and Babar Azam led the recovery, settling into a strong partnership and taking the score to 117, with Babar playing with typical class. Robinson broke the partnership, Azhar innocuously gloving one down the leg side to Ben Foakes. Ahmed came into the attack just before lunch but struggled, bowling a little too short and finding a ruthless opponent in Babar, who gave him a harsh introduction into Test cricket.

However, Ahmed’s confidence grew after lunch, and he settled into a good rhythm, showcasing his much-vaunted googly while bowling a tighter line that restricted the Pakistani batters. Saud Shakeel, who has had an impressive series, became his maiden Test wicket, drawn forward he inside-edged a leg-break onto his pad, the ball ballooning in the air before being smartly taken by Ollie Pope at short leg.

Pakistan, like in Multan, contrived to be the architect of their own downfall at points, with several wickets gifted to England, Mohammad Rizwan’s dismissal being a prime example, miscuing a Joe Root full toss straight to Ben Stokes in the deep. Babar Azam continued to bat with the fluency we have become accustomed to and a century seemed all but certain until he was needlessly run out for 78, Ben Foakes doing well to gather Harry Brook’s low throw, tumbling and breaking the stumps in one motion. It was an ignominious end for Babar after such a wonderful knock, though arguably, a dive might have saved him.

Agha Salman opted for the counter-attacking approach after the fall of Babar, taking a particular liking to Leach and making a deserved half-century. However, Leach had the last laugh, having the charging Salman stumped by Foakes with a clever bit of bowling. Ahmed had earlier picked up his second wicket, that of Faheem Ashraf, plumb LBW, after tormenting him for several overs. Ahmed looked especially dangerous bowling around the wicket to the left-handers, attacking the outside edge with his googly. His senior spin partner finished the innings off, Leach mopping up the tail and finishing with figures of 4-140. as Pakistan were all out for 304.

It was another excellent performance from England’s bowlers, supplemented by some creative captaincy from Stokes. Pakistan would have been disappointed, especially considering they had won the toss; on another slow surface that was providing moderate but hardly excessive spin. England was left with a tricky little spell to negotiate before the close of play, and the hero of Multan, Abrar Ahmed, continued his excellent start to Test cricket, pinning Zak Crawley LBW for nought. Predictably, England declined the night watchman, an obsolete position in their brave brand of cricket. Ollie Pope and Ben Duckett saw England through to close, teeing up an exciting day tomorrow.

Rehan Ahmed’s debut may not grant him the same superlatives that Abrar Ahmed received in Multan, but it was an impressive display from the youngster in just his fourth first-class appearance. He showed strong character, coming back strongly after a difficult spell before lunch, where his five overs cost 37 runs. Once again, Ben Stokes deserves credit for showing faith in the young man, backing his wicket-taking potential while providing him with some protection in the deep. Protection off the field may become equally necessary. Ahmed is a precocious talent, and his performance today will only fuel the hype surrounding him; England’s fascination with mystery spinners is a long-running saga, having long been tormented by them. But Ahmed seems a well-grounded and inherently likable individual. With McCullum and Stokes providing a nurturing environment, unconcerned by external voices, the early signs are very exciting for English cricket. 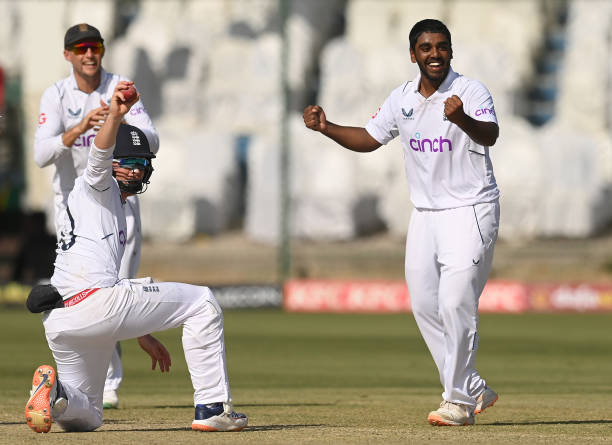