The 2020 Tour de France witnessed the second-youngest winner of the event ever, but also the lowest average age of stage winners.

The 2020 edition of La Grande Boucle saw the eventual winner, Tadej Pogacar, win three stages, at the age of 21.

It is quite an uncommon age for a rider to win a stage, let alone three – as uncommon as a 35 or a 36-year-old winning a stage.

As the graph shows, the most common ages of stage winners in the last decade is between 25 and 29 – a rider’s prime for stage victories, which is 27.7.

26-year-old riders have taken the majority of stage wins with 36 stages – that happened most often in the 2011 Tour, where Mark Cavendish won five stages, and Jelle Vanendert, Andy Schleck and Tony Martin all chipped in with one stage victory each for the 26-year-olds.

2012 was the only edition of the Tour in the last decade that did not see a single 26-year-old win a stage.

This is followed by 25- and 29-year-old riders, each winning 24 stages – with the former age dominating the flat stages, from Marcel Kittel’s four stage wins in 2014, to Caleb Ewan (five stages) and Wout van Aert (three) winning stages in 2019 and 2020.

Four years later, Kittel was at it again, winning another four stages – what does stand out, however, is that in that four-year gap, more riders are winning mountain, medium mountain and hilly stages than their 25-year-old counterparts.

In the last decade, riders at the age of 29 have won 13 stages that have included hills and/or mountains; riders four years younger only won 11, five of which came from French climbers (Warren Barguil won two stages in 2017 and the Polka Dot jersey).

27-year-olds have won 21 stages in the last decade, which together with 28-year-olds is where we see a move away from victories on flat stages to victories in mountain stages.

Indeed, the average age of mountain stage victories since 2011 is 27.7.

Having mentioned different ages, nationalities, and stages, what types of stages and lengths suite what ages of riders?

What stands out here is that the average distance of a flat stage in 2015 was just under 170kms – the average age of the winners was also the highest at 31.3 years.

However, last year the average distance of a flat stage was just over 170kms and the average age of the stage winner was 26.4 – almost five years younger than five years previous.

Another point to take note of is that the average age of winners on flat stages has decreased in the last five years.

Analysing data of flat stages from the last decade of the Tour de France, the table above shows that the younger riders are most up for the shortest stages (<120), while those with four years more experience target and win stages between 120 and 160kms long.

Flat stages have also been dominated by German and British riders in the last decade – more likely than not, Cavendish, Kittel or Andre Greipel would come away with a win, although the last year that happened was in 2017 (Kittel).

Since his win in Pau, the average age of flat stage winners has been 26 years and has been a battle between Dylan Groenewegen and Fernando Gaviria or van Aert, Ewan and Sam Bennett (the odd one out at 29 years old).

Moving on to the mountain stages in the last 10 years, since 2013, the average distance of these stages has decreased slightly.

Another interesting trend to note is that as these average distance decrease, the age of that year’s Tour de France winner has increased year by year, up until 2018, when Geraint Thomas won at the age of 31.

This is until 2017 when the average distance was 172kms and the average age decreased to 26.6.

As the average distance has decreased over the years, the average age of mountain stage winners has increased again since 2017.

Have some ages been better than others at certain distances? And if so, what nationalities can you count on to do well?

The French have been the most present riders on home turf in the last decade, taking 15 victories in 62 mountain stages in this data set – more than any other nation.

However, they only have two mountain stage wins when the distance is between 160kms and 180kms, and two wins on stages between 200kms and 220kms.

26-year-old riders have a preference for this length of a mountain stage, winning five stages – other winners have included Primoz Roglic in 2018 at the age of 28, and Nairo Quintana at the age of 29 in 2019.

French riders, do, however, have a preference for stages up to 160kms, winning eight stages since 2011.

Together with Chris Froome and S. Yates, the French have also accumulated a number of wins on stages above 180kms – five, although the last victory on a stage of that length was in 2018 thanks to the current world champion, Julian Alaphilippe.

Belgian riders have been most present on stages between 160km and 180kms – Vanendert winning on Plateau de Beille in 2011, Thomas De Gendt in 2016 at Chalet Reynard and finally, Dylan Teuns creeping past Giulio Ciccone in 2019, where the Italian took the yellow jersey and wore it for two days.

Finally, another point of interest is that Nibali is the only Italian rider to have won any mountain stages in the last decade – five.

Matteo Trentin and Fabio Aru have won medium mountain stages to bring Italy’s total to eight in the mountains, however, one may have expected more stage wins from a country that has produced climbing talents such as Marco Pantani and Riccardo Riccò.

According to multiple sources, the 2018 and 2019 editions of the Tour de France did not have any medium mountain stages.

For that reason, there is no data for those two years in the graph shown above.

Across the last 10 Tour de Frances, the trend on medium mountain stages is that as distance decreases, so too does the age of the stage winner and vice versa.

This is also true of the age of the Tour de France winner – as distance increases/decreases, so too has the age of the winner, except for last year’s Tour.

The 2012 edition saw a mix of riders win the medium mountain stages – Sagan, Froome, Thibaut Pinot and David Millar – perhaps only two of those can be considered exceptional climbers.

Sagan is, well, Sagan, and Millar’s biggest strength was his time-trialling – the Scot was also the oldest rider to win a stage that year, while Sagan and Pinot were just 22 years of age.

Although last year only had two stages categorised as a medium mountain, both of them were won by riders adept in ascending the mountain road in Alaphilippe and the young Colombian Daniel Martinez.

When including data from hilly stages for 2018 and 2019, this trend is still true; as distance decreases, so too does the average age of the winner – the exceptions would be the 2019 and 2020 Tours, where the average distance increased, yet the eventual winner was 22 and 21-years-old.

So which nations do best over these medium mountain stage distances which have ranged between 145kms and 226kms in the last decade?

Four stages have been less than 160kms in this data set, won by riders from four different nations – France, Belgium, Australia, and The Netherlands.

The youngest winner was Pinot (22), while the oldest medium mountain stage winner was Simon Gerrans in 2013 at the age of 33.

Britain’s Steve Cummings has won two medium mountain stages in the Tour de France, one in 2015 and one in 2016 at the ages of 34 and 35, respectively.

This distance does seem to suit the older riders, with Thor Hushovd also winning a stage in 2011 at the age of 33 – the youngest rider to win this type of stage was Michael Matthews at 26 years old in 2017.

The French riders have won three stages at the distances between 180kms and 200kms, and it is riders who are about to reach their prime who win stages these distances in the medium mountains.

Although the youngest winner in the last decade was 22 (Sagan in 2012), the oldest winner was Andre Greipel in stage 15 of the 2015 Tour at the age of 33, taking victory in a bunch sprint.

Of the five medium mountain stages that occurred between 200kms and 220kms, it has been Spanish riders who have won two of those stages – Luis Leon Sanchez in 2011, and Ruben Plaza Molina in 2015 at the age of 35.

Greg Van Avermaet was the next oldest winner at the age of 31 in 2016 – in a 216km stage from Limoges to Le Lioran, he broke away from his countryman Thomas De Gendt on Col de Pertus 17.3kms from the finish, going solo, and taking the yellow jersey.

There have only been two medium mountain stages more than 220kms long – Millar winning one in 2012, and Tony Martin winning the other of 223kms in 2015 at the age of 30; both of these riders are, of course, well known for their time-trialling ability.

Of his five stage wins at the Tour, not including a team time trial win, Tony Martin has won three individual time trials; the remaining two were medium mountain stages.

If a team is looking for stage victories, then its best bet is to bring in a French rider who can climb. This is obviously something Quick-Step did when they brought in Alaphilippe, but even before his arrival, Patrick Lefevre’s team didn’t have issues winning stages.

French sprinters have not had much of a say in the last few years – Arnaud Demarre was the last French winner in a bunch sprint in the Tour, in 2017, beating Sagan and Alexander Kristoff to the line, which also saw Cavendish and John Degenkolb hit the ground.

However, cycling, like everything else, is a landscape that changes over time. The average age of stage winners has decreased, where British and German riders used to dominate between 2011 and 2018 (62 stage victories between them in eight years), but in recent years the Tour has seen a re-emergence of Australian, Belgian and Colombian stage winners, as well as some new nations, join the list, such as Slovenia. 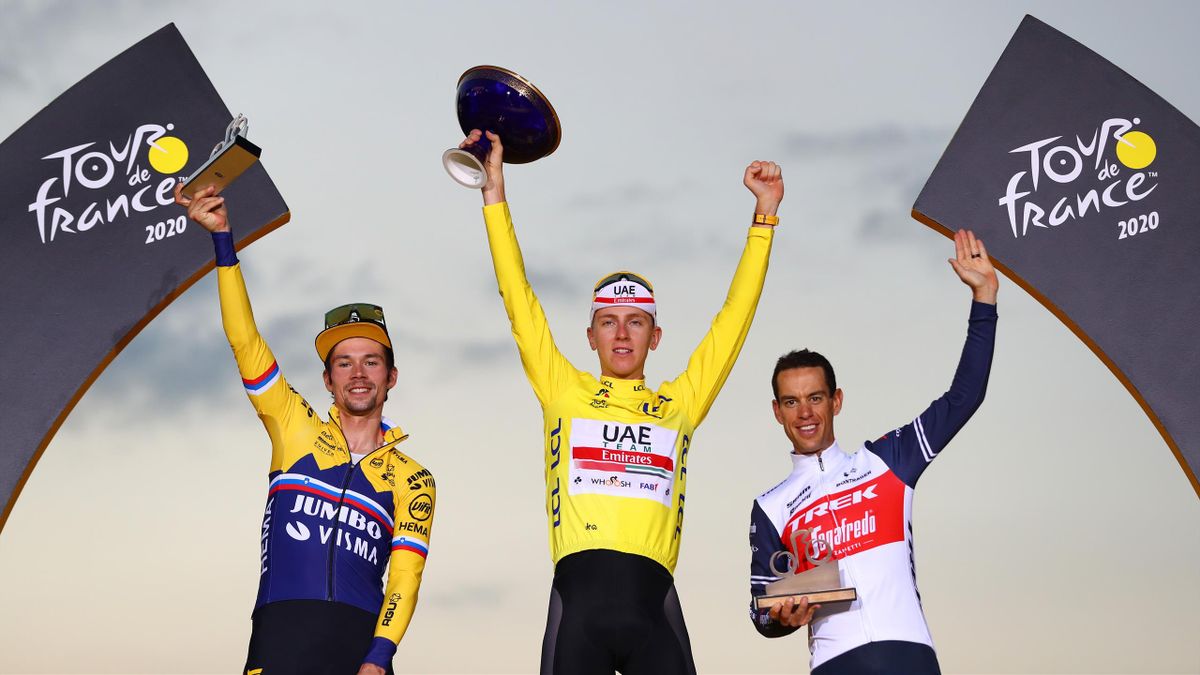