An already relegated Fulham side travelled 208 miles up to face a Manchester United side who have almost certainly wrapped up 2nd place in the Premier League.

It is also worth mentioning that it was the return of fans to Premier League games today, with a 25% or 10,000 attendance capacity (whichever number is smaller). The fans at Old Trafford arrived with their green and gold scarves and shirts on; a further message in protest for the United Owners to sell the club.

United dominated the early proceedings with a number of crosses and through ball attempts, which all failed to really test Areola in goal. On 14 minutes, Edison Cavani threw himself to the floor in search for a penalty kick, blaming Tosin for a ‘foul’. The referees were not fooled by his antics.

However though 11 minutes later, David De Gea clears the ball, which flies past all players in the midfield and finds Cavani, through on goal. Instead of stereotypically driving closer and placing it beyond the keeper, Cavani spots Areola off his line, and chips the ball over and into the net from around 40 yards out.

The goal was without deliberation however as the forward was offside when De Gea played the ball but was not when Bruno Fernandes seemingly got the slightest of touches on the ball according to the VAR review; which upon review seems the wrong decision. Nonetheless, fantastic vision and quality from the Uruguayan, deserving of his new contract extension.

Completely against the run of play, Fulham equalised with superb delivery by Bobby Decordova Reid is met by Joe Bryan, who slips past the United defence and heads it beyond De Gea at the near post!

The game subsequently petered out, ending all square in Manchester.

Two 3-1 wins in a row for Southampton brought them into this game feeling far more positive than before those two fixtures; winning just 1 game in 7 before said fixtures.

Leeds looked to build upon recent form too, with impressive wins at home to Tottenham (3-1) and away at Burnley (0-4).

A goal-less first half in this game did not correlate to bad viewership.

Within 2 minutes, a Che Adams header is tipped over the bar by Leeds keeper Castilla, after the cross is whipped in by a driving Stuart Armstrong. Just 2 minutes after this, Adams plays through English youngster Nathan Tella who forces the ball to ricochet off a helpless Luke Ayling, which makes Castilla to make another stop early – however, the offside flag was raised.

After the early pressure, Marco Bielsa’s side began to grow into the game with a number of chances, most noticeable on 24 minutes, after a deep cross from Jack Harrison finds Raphinha, who heads it down for Stuart Dallas, who cannot find the target with his left-footed shot.

The game built up however to a deserved goal for Leeds, which was beautifully taken by Patrick Bamford, after an inch-perfect chip through-ball by Brazilian winger Raphinha. 0-1 to the away side.

The home side responded with attacks of their own, through Nathan Redmond and Danny Ings; the two substitutes with close yet not accurate enough strikes and both missing the target.

Leeds’ own substitute Tyler Roberts secured the 3 points by means of a deadly counterattack to add insult to injury. A palmed strike from Bamford by Saints’ keeper McCarthy can only find a trailing Roberts who finishes what Bamford started. Game over.

A meaningless game in relation to relegation or the title but newly-crowned champions took a trip to the south coast on their celebration tour to face Brighton.

The stakes were low for this game but the output was high with 5 goals, 1 red card and 3 points for the underdog Seagulls. Here is a summary of all the goals and noticeable events.

GOAL (2’) Ilkay Gundogan nodded the Citizens ahead early at the Amex after a Riyad Mahrez delivery from the right-wing, which was met by Gundogan at the back post. His 13th league goal of the season, most of any City player this league campaign.

RED CARD (10’) City full-back Joao Cancelo was sent for an early bath when he brought down Danny Welbeck after making a meal of a clearance, bringing him down to avoid conceding a goal-scoring opportunity. City found themselves ahead, but down a man.

Just a slender one-goal lead for the Manchester side heading into halftime.

GOAL (48’) The young English extraordinaire Phil Foden continues to excel in this Manchester City side and showed so here with a sublime solo goal. After bursting down the left-wing, he darts inside and whips the ball into the bottom right-hand corner. The Brighton defence could not handle his quick feet and pace. City held a comfortable position.

GOAL (50’) Substitute Troussard instantly replies to Foden and City with his own goal. The ever-reliable Rodri plays the ball straight into the path of the Brighton forward who rifles it past Ederson from close range.

GOAL (72’) Brighton on the second wave of an attacking sequence finds the back of the net through Adam Webster, who headed it beyond a stretching Ederson at the back post. Against all odds the Seagulls had found a way back!

GOAL (77’) DAN BURN! A scrappy goal but the home fans wont care as they found themselves ahead after being 2 goals down against the Champions. It was all caused after a Troussard shot was palmed away by Ederson, Burn reacted and staggered it into the net. 3-2 Brighton!

CHANCE (90+1’) The last real chance of the game fell to City in search of an equaliser! Sanchez spills the ball into the penalty area, which eventually finds youngster Garcia, who can only send the ball over the bar and into the stands.

An encouraging win for Brighton who will take this momentum into the final day and next season.

City however will want Gundogan back fit after going down injured, despite having a plethora of options in midfield.

And then came the featured match of the evening, the main event was Chelsea hosting Leicester at Stamford Bridge. If Leicester wins, they all but secure Champions League football for the next campaign. Chelsea with a win-get revenge for Saturday’s FA Cup final loss to this same Leicester team and give themselves breathing room away from Liverpool in the top 4 race.

Chelsea came out and matched the fan’s electricity and vibrance with a suffocating start. Doubling the ball and pressing hard resulted in a number of great chances for the Blues inside 10 minutes. Firstly with forward Timo Werner who finds Ben Chilwell with a through pass, who himself could not find anyone with the low cross. And then with Reece James who, from right-back, tried to fire one at Kasper Schmeichel, however instead it just rolls past the far post. Leicester, despite being under serious pressure, had survived the opening assault.

On 21 minutes, moments after a Timo Werner had a penalty appeal turned down, N’golo Kante wins the ball back and drives forward from the right side to centre field, and threads Timo Werner through on goal. The German striker does not disappoint and squeezes it beyond Schmeichel to put the Blues in the driver’s seat. This was all irrelevant though as Werner was offside, too eager on his run.

Once again Chelsea were disallowed another goal as a cross came in, and Werner couldn’t adjust his body to head the ball into the net, and instead uses his elbow. It remained 0-0 into the break.

After the break though Chelsea took a deserved lead. Just 90 seconds after the restart a corner is delivered by Chilwell, which finds a Leicester body first, and deflects into Antonio Rudiger’s path and bulges in the net. Chelsea finally obtained the goal that they craved.

The following 20 minutes lulled into a midfield battle until Werner was unleashed down the left-wing and earned a penalty after a clumsy challenge from Wesley Fofana. A chance to double their lead. A chance was taken by Jorginho, giving Chelsea a two-goal advantage and becoming Chelsea’s league top scorer in the process; all of which from the penalty spot.

Just when the time was beginning to run out for Leicester they have gifted a lifeline. Dozy play for the Chelsea defence is punished with Wilfred Ndidi winning the ball and passing to an open Kelechi Iheanacho, who strokes the ball well. 2-1, Game on.

On 89 minutes Leicester creates a great passage of play down the right-hand side, resulting in a low cross to the edge of the box, which falls to an Ayoze Perez with plenty of time. It was a great look on goal, however, he slices the ball over the bar and misses the target entirely. That was the chance for the Foxes to save a draw.

A vital win for Chelsea in their quest for the top 4, a win on Sunday vs Aston Villa secures it.

Leicester may have been suffering an FA Cup win hangover, as their sluggish start has cost them 3 points in this tight race. They have to hope for Liverpool to drop points in their last 2 games or win by enough on Sunday vs Tottenham to qualify via a greater goal difference. 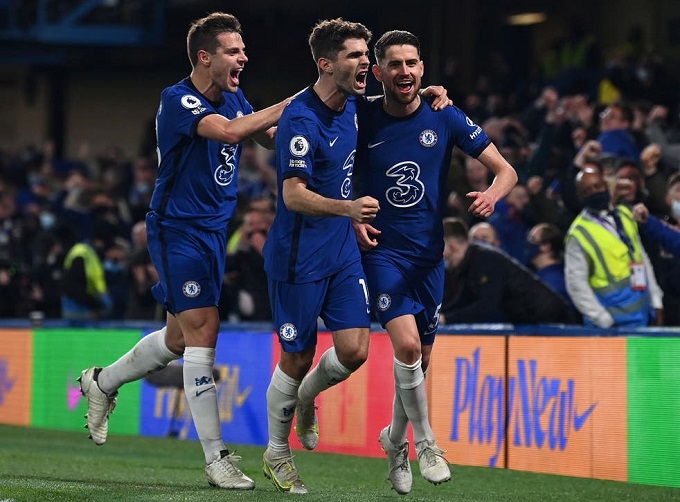