Dustin Poirier is undoubtedly next in line for a shot at the Lightweight title, after he defeated Conor McGregor via TKO in the second round at UFC 257. Poirier is now 11-2 as a UFC Lightweight, adding another huge name to his impressive resume whilst McGregor is without victory in the division since his title win over Eddie Alvarez back in 2016.

After a couple of early exchanges on the feet, Poirier began the opening round with a takedown to slow the pace of the fight that was expected to be high pressure by his opponent. McGregor was able to sprawl back up and clinch up against the fence, executing some shoulder strikes that proved effective in his last bout with Donald Cerrone. Poirier replied with strikes of his own, but ultimately used his strength and took his time against the fence to ware McGregor down in the first minutes of the contest.

Former two-division champion McGregor broke free from the clinch and the exchanges on the feet began again where the Irishman is mainly at his most deadly. He managed to land some clean strikes that Poirier took well, whereas the American was utilising calf kicks that were doing early damage to the legs of McGregor.

In the second round, Poirier continued to hack down the leg of McGregor with more brutal calf kicks, effecting the way his opponent was able to move. McGregor still attacked with hook combinations that connected to the head of Poirier, but it was halfway through the round when Poirier attacked with a flurry of hooks, catching McGregor clean with his right and sending him to the canvas. The 32 year old former interim champion followed up with another blow before referee Herb Dean called a stop to the contest and earned ‘The Diamond’ a famous win.

After the fight, Poirier expressed that his next fight should be for a belt but that a rematch with Conor makes sense after evening the series between the pair. McGregor highlighted how the calf kick damage was a huge factor in his loss, whilst mentioning how his inactivity in the octagon in recent years did not help his sharpness in the bout. 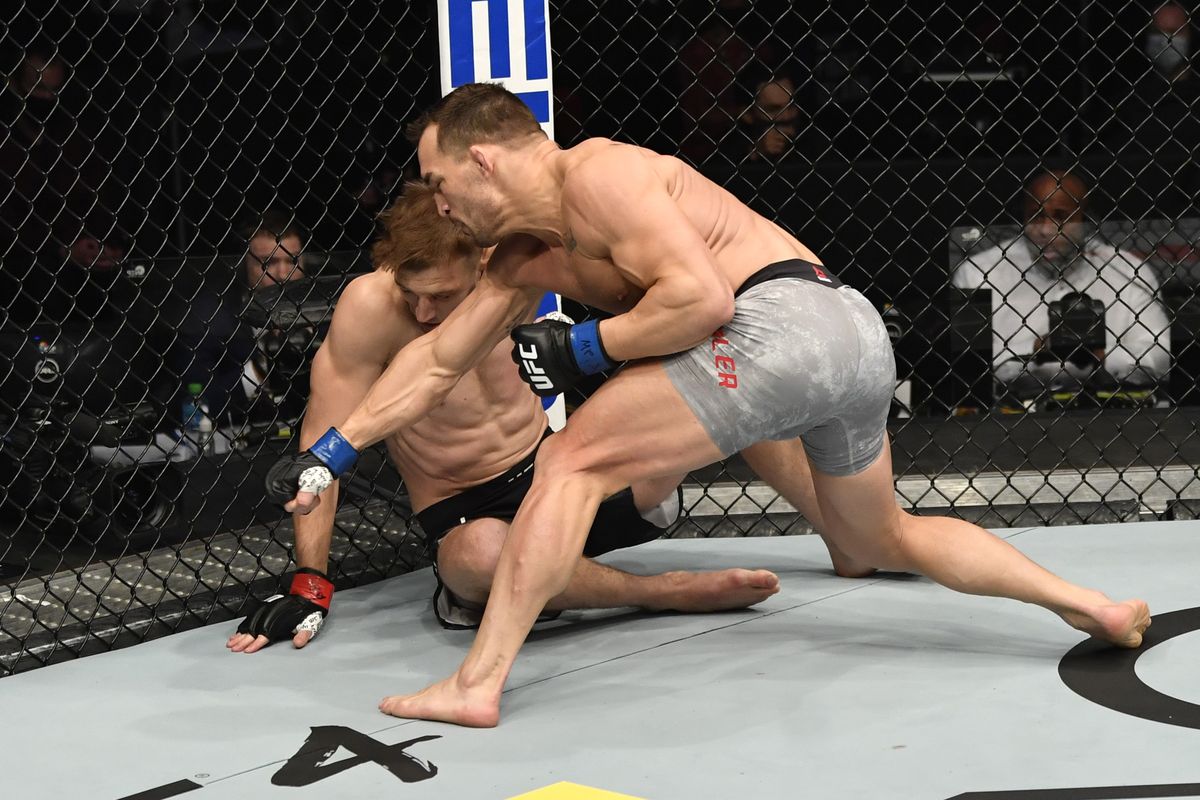 In the co main event, Michael Chandler proved he was among the elite in the Lightweight division after a first round TKO victory over Dan Hooker. Chandler was previously a multiple time Bellator champion, and was coming into the fight making his UFC debut against Hooker who is sixth in the current Lightweight rankings.

The first minute of the fight was cautious from both fighters, Hooker exercising a couple of leg kicks whilst Chandler was throwing some feints early on. The American was the initiator in turning on the pressure when he threw multiple shots to body of Hooker, followed by a few near misses to the head. It was a fast start from the man who is more commonly known for his wrestling credentials.

Chandler’s pressure paid off moments later, when a right hand to the body and a subsequent left hand to the jaw combination knocked down Hooker, followed by a brutal hammer fists finish stopped by referee Marc Goddard. It was the perfect debut performance from Chandler, who after the fight called out current UFC Lightweight champion Khabib Nurmagomedov. 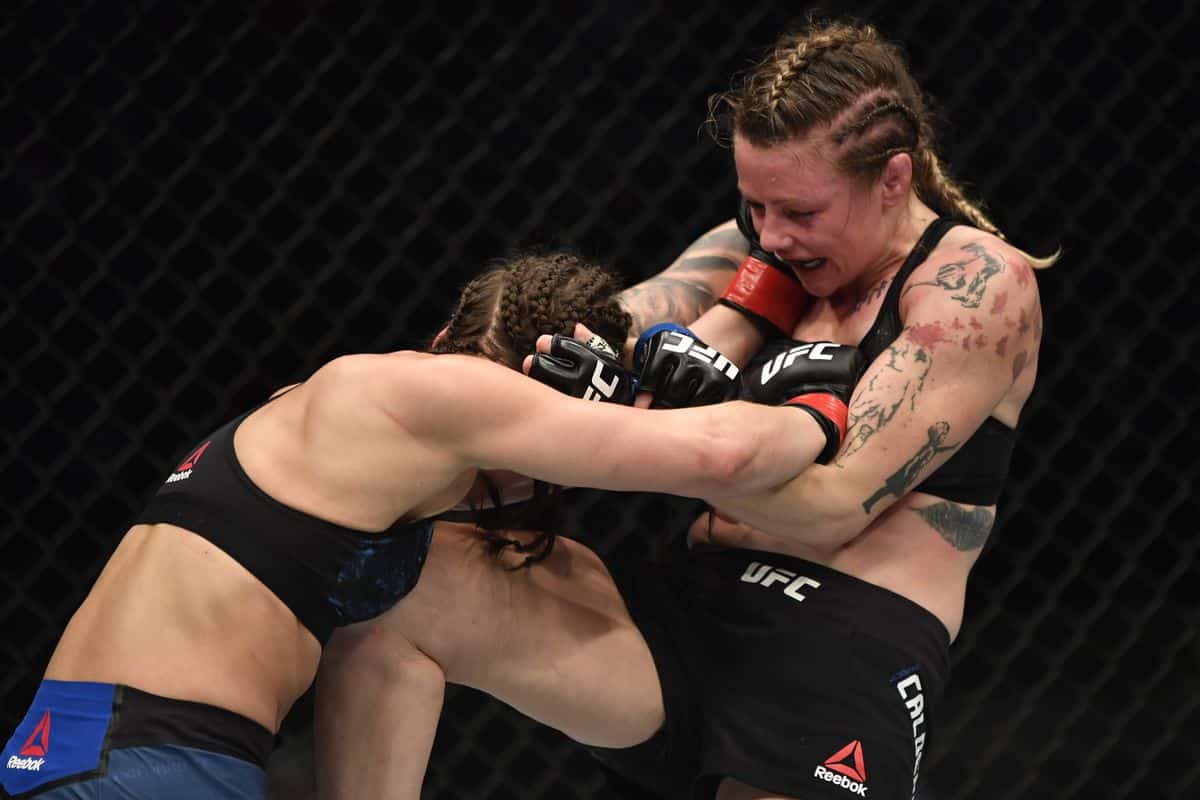 Scottish Women’s Flyweight contender Joanne Calderwood defeated Jessica Eye via unanimous decision (30-27×2, 29-28). The pair had previously recorded losses in their last fights, and were looking to avenge themselves back to the top of the rankings in the division.

Calderwood dominated the fight on the feet with a range of beautiful jabs and leg kicks that accumulated damage over the course of the 15 minutes, whilst staying elusive and avoiding the counter strikes that Eye was aiming for. Calderwood also showed great work in the clinch and executed a straight front foot to the head in what was one of her cleanest shots that landed on the night.

Eye did manage to land a takedown in the third round, but Calderwood’s defence on the ground was too strong for the American to make an impact, who ultimately didn’t do enough over the course of the fight. Calderwood spoke after the bout on her hopes to get back in the octagon as soon as possible and compete for the belt later this year.

Makhmud Muradov beat Andrew Sanchez in the third round via TKO for the fighter’s 14th consecutive MMA victory. The Uzbekistan native was in progress to win the fight on points, but landed a sensational flying knee, stunning Sanchez and following up with a series on punches that called a stop to the bout.

Muradov was consistent with keeping up the pressure throughout the fight and landed head kicks within his combinations to spread the damage on his opponent’s body. There were also times when Muradov was close to ending the fight when his shots landed, but Sanchez was durable to hang in for as long as he did. In only his third UFC fight, the 30 year old looks to be a serious prospect in the Middleweight division. 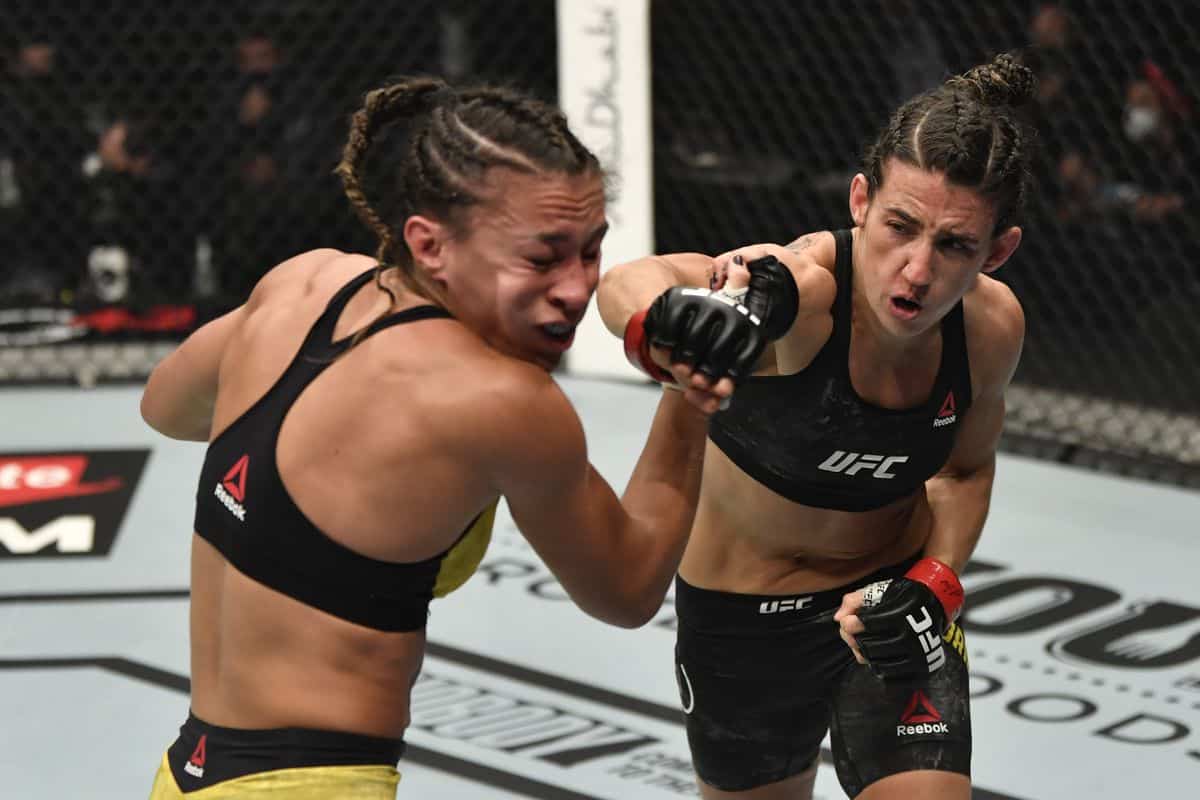 In a night filled with knockout stoppages, Marina Rodriguez defeated Amanda Ribas via TKO in a second-round victory. The stoppage came when Rodriguez swung a right hook into the temple of her opponent and went for the ground and pound thereafter which Ribas initially escaped from.

There was confusion for a moment when it looked like Herb Dean had intervened just before Ribas got back up, but the fight was still on momentarily until Rodriguez connected with another hook to the head just seconds later which ended the fight for good.

Meanwhile, the night’s only submission came during Julianna Pena’s victory over Sara McMann in a Women’s Bantamweight bout. It came late in the final round, after most of the bout had primarily been a grappling contest, as Pena locked in a rear-naked choke to secure her first win for over a year. 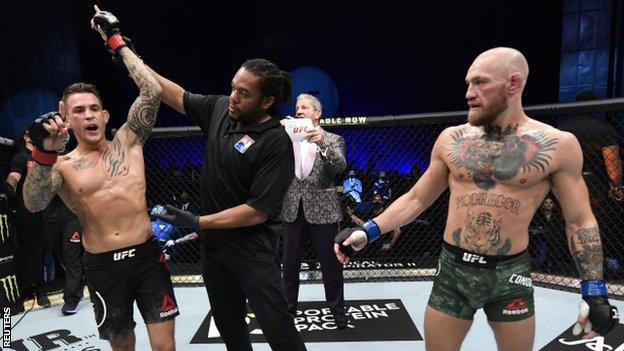