On August 7th, UFC 265 will be held at the Toyota Center in Houston. The venue is quickly becoming one of the organization’s favorite location, and for good reason; the atmosphere is always electric. The main event is a clash of two of the most dangerous heavyweights in the world of mixed martial arts, Derrick Lewis and Ciryl Gane. In total, there are five fights on the main card and each of them should be hotly contested and entertaining. Without further ado, let’s get into it!

Derrick Lewis and Ciryl Gane will enter the octagon on August 7th squaring off in a match in which the winner will be declared the UFC Interim Heavyweight Champion. The real prize is a title shot against reigning heavyweight champion, Francis Ngannou. Both men will be highly motivated coming into the match, as a victory gets them one step closer to their ultimate goal.

Derrick Lewis is a Houston native who will enjoy the rare luxury of competing in a main event in front of his home town fans. His backstory is interesting enough to be an hour long documentary. He was once awarded a college scholarship to play American football, he spent over three years in prison for assault, and was trained to box by legendary heavyweight champion, George Foreman. He’s already been given one shot at the heavyweight title, losing to Daniel Cormier in November of 2018. He enters August 7th’s main event on a four fight win streak and a desire to prove he deserves another shot at the title.

Through six fights in the UFC, Ciryl Gane remains undefeated. While the Frenchman has had a relatively short tenure in the organization compared to some of the other contenders in the division, he has been so impressive that one more win will most likely grant him a shot at the title. If there is one criticism of Gane it’s that he’s not always as exciting a performer as he could be; three out of his last four victories have come by unanimous decision. Nevertheless, he is a serious challenger for the heavyweight championship and a victory against a respected performer like Lewis would give him sole possession of number one contender status.

José Aldo once had seven consecutive successful defenses of the UFC Featherweight championship. A streak like that is impressive enough to earn him entrance into the UFC Hall of Fame whenever he decides to retire. For the time being, he is a fighter looking to reestablish himself as one of the top performers in the organization. Prior to his win against Marlon Vera in December of 2020, Aldo had lost three consecutive fights and did not resemble the fighter who once held a firm grip on the featherweight division. He is now a bantamweight; last year he lost a title fight against Petr Yan. He is hoping to climb his way back to the top of the rankings and get another shot at the belt. A win on August 7th would be a step in the right direction.

When he’s focused, Pedro Munhoz is a menacing performer capable of ending a fight in spectacular fashion. He’s been awarded the “Performance of the Night” award three times due to his use of the guillotine chokehold, causing his opponent to tap out of the fight. Munhoz is a dangerous grappler who was able to brake a two fight losing streak when he won a unanimous decision against Jimmie Rivera in February of this year. He’s never had a UFC title shot; a win against a household name like José Aldo could help to change that.

Michael Chiesa has not been a very active fighter as of late. He fought once in 2019 and once in 2020. After winning a unanimous decision in January of this year, his bout on August 7th will mark the first time he’s had multiple fights on the same calendar since 2018. That being said, he is on a four fight win streak and that should not be overlooked. If he begins competing more regularly and continues to win, he may be considered a contender in the welterweight division.

Vicente Luque put the world on notice that he is one of the most exciting fighters in the welterweight division when he forced UFC legend Tyron Woodley to submit in the first round of their match in March of this year. Since then, Woodley has turned his attention to boxing. Meanwhile Luque can extend his winning streak to four fights with a victory on August 7th. At 29 years old, he is entering his prime as a fighter. If recent history is any indicator, he can be one of the top performers in the division for years to come.

Tecia Torres is not to be taken lightly. She is one of the most classically trained mixed martial artists in the UFC. Holding black belts in both Karate and Jhoon-Rhee Taekwondo, her opponents know they will not have an easy go of it when they climb into the octagon with her. After losing four consecutive fights throughout 2018 and 2019, Torres bounced back nicely in 2020; she won both of her bouts last year. August 7th will be the first time she’s performed for the fans in 2021. Known as the consummate professional, she will certainly come prepared as she looks to continue her winning ways.

Angela Hill began her professional career in the UFC but left the organization after only four fights. She then joined Invicta Fighting Championships and proceeded to become the organization’s strawweight champion. In 2017, she returned to the UFC and has become known as a fierce competitor. However, she hasn’t been able to achieve championship success in the world’s most famous mixed martial arts organization. At 36 years old, Hill will have to zero in on her goals and make a serious push if she wants to become a champion before age forces her to retire.

Song Yadong lost a unanimous decision to Kyler Phillips in March of this year. He desperately wants to avoid the first two fight losing streak of his career. At only 23 years old, there is plenty of time for him to bounce back from his recent setback and reestablish himself as one of the most promising prospects in the division. If history is any indicator, Yadong’s ability to bounce back from a loss spells trouble for his opponent on August 7th.

Casey Kenney lost via a split decision on the same night Song Yadong suffered a defeat back in March. Like his opponent, Kenney has never lost two consecutive fights in his career. Casey Kenney is 30 years old and in his physical prime as an athlete. He wants to prove to UFC’s brass that he is worthy of a title shot; avoiding the first losing streak of his career will play an important role in helping him get there. Yadong vs. Kenney should be an all out war, as both men look to boost themselves in the rankings and get back to their winning ways.

UFC 265: Lewis vs. Gane is available through pay-per-view on BT Sport in the United Kingdom and on ESPN Plus in the United States. We will provide results of the bouts and in depth analysis of each fight. As always stay tuned to World In Sport for the best coverage and the latest updates on the UFC and the world of mixed martial arts! 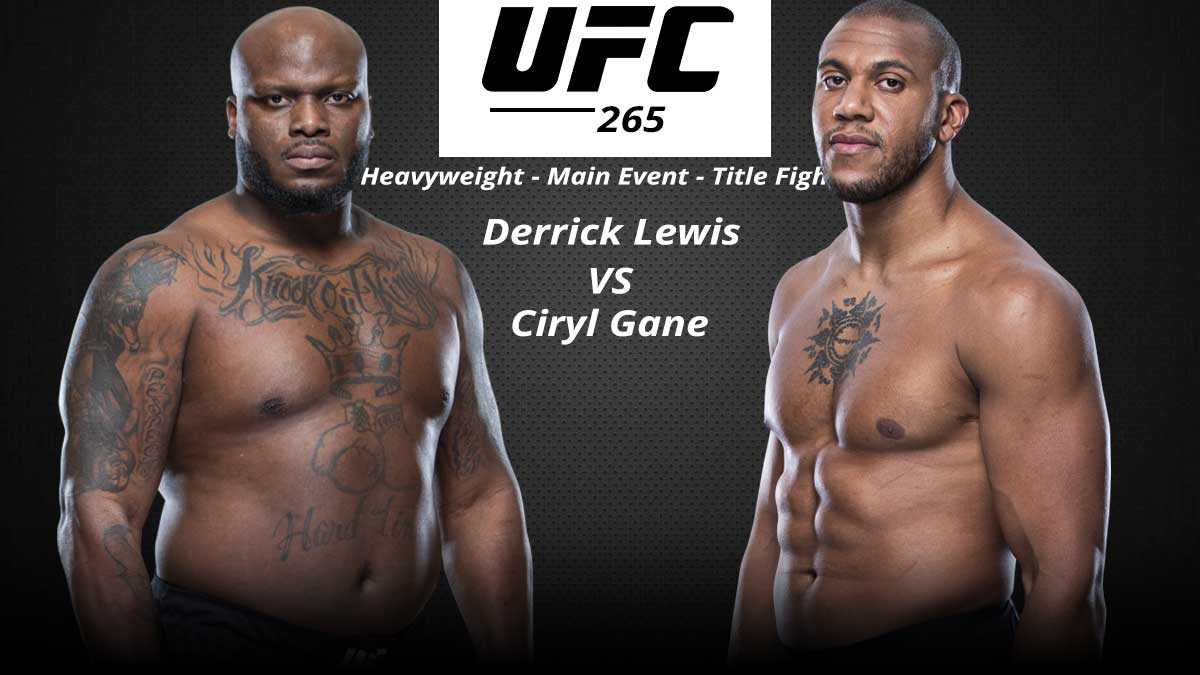