On Saturday, April 9th, the premier mixed marts organization in the world returns with UFC 273 from Jacksonville Florida. The main event of the evening features reigning featherweight champion Alexander Volkanovski versus a challenger with a cult-like following known simply as The Korean Zombie. While this matchup alone is enough to get fans on the edge of their seats, it is not the only championship bout of the night. Reigning bantamweight champion Aljamain Sterling will put his belt on the line against Petr Yan in the co-main event of the evening. There’s a lot to unpack here. Without further ado, let’s get into it!

Volkanovski vs. The Zombie

UFC Featherweight Champion Alexander Volkanovski has amassed an astonishing win streak of 20 consecutive fights. The lone defeat of his career occurred in December of 2013, more than eight years ago. Since that time, he’s not only become the most feared featherweight in the largest mixed martial arts organization in the world, he’s also become widely recognized as one of the best pound-for-pound fighters in the entire sport. With great skills, come great expectations; Volkanovski is well aware of this. His journey as a lifelong athlete led him to become a professional rugby player in his native country of Australia prior to focusing solely on combat sports. On Saturday, April 9th, he will put his belt on the line against a deserving opponent. Fans will be waiting with baited breath to see if he can add another win to his unbeaten streak.

Chan Sung Jung has such an enormous following that the majority of his fans only know him by his moniker, The Korean Zombie. On Saturday, he will get the second shot at the UFC Featherweight Championship of his career. His first opportunity came against José Aldo in August of 2013. While The Zombie did not emerge victorious that night, he has gone on to build an impressive resume for himself over the years; no one disputes whether or not he deserves another shot at the belt. He is a dangerous man inside the octagon. He possesses Black belts in Hapkido, Taekwondo, Judo and Brazilian Jiu-Jitsu. On Saturday he will get his chance to use those skills to become champion of the world.

Aljamain Sterling is perhaps the most controversial champion in UFC history. In March of last year, he won the organization’s bantamweight championship via disqualification when Petr Yan was disqualified for an illegal intentional knee in the fourth round. The win would have been controversial if the two fighters were vying for a vacant title. However, the fact that Yan was the reigning champion and his belt was in affect stripped due to a judgment call by the officials, rubbed a lot of fans the wrong way. The prevailing perception is that Sterling must beat Yan in the rematch to be recognized as the true champion.

Petr Yan has openly stated that he still considers himself the UFC’s bantamweight champion. He believes that a win on Saturday is inevitable and when the belt is back around his waist, it will in essence be returned to its rightful owner. Since their fight over a year ago, Sterling has gone through neck surgery and recovery. He states that he is in the best shape of his life and is prepared to defend his crown. Fans have desired this fight with great anticipation for over a year. The wait is over; the day of reckoning is finally here!

Welterweight challenger, Gilbert Burns, is one of the best submission artists in all of the UFC. Hailing from Brazil, he took home the Bronze medal at the World Grappling Championship in 2015. He also won the Gold medal in the World Jiu-Jitsu tournament in 2010, 2011 and 2013. To say he is multi-talented would be a gross understatement. Yet for all of his achievements, there is one award that has managed to allude Burns during his career: the UFC Welterweight championship. He got his shot at the title in February of last year but was knocked out by reigning champion Kamaru Usman in the third round. If he wants to climb his way back to the top of the divisional rankings, he will have to start with an impressive performance on Saturday night.

There has been a lot of talk about Khamzat Chimaev over the course of the last few months. There were rumors swirling that he may be involved in a catchweight bout with the legendary Nate Diaz, but that unraveled when Diaz announced he would be walking away from the UFC. Chimaev’s reputation soared like a rocket in 2020. He made his organizational debut, and quickly went undefeated in three bouts that calendar year. Last October, he was impressive in a first round submission victory at UFC 267. He is relatively new to the organization and may have a long way to go before he gets a title shot; but his name recognition is growing each and every time he steps foot inside the octagon.

Women’s strawweight challenger Mackenzie Dern has amassed seven Gold medals in Jiu-Jitsu in an impressive career outside of the octagon. These victories have come at the World Cup, the Pan-American Games, and the Asian Games. She has traveled the world displaying her talents and has become recognized around the globe as one of the best competitors in the sport. She’s no slouch in mixed martial arts either. She is currently ranked 5th in the division and was on a four-fight win streak prior to her upset defeat at the hands of Marina Rodriguez in October of last year. She is a fierce competitor; fight fans are in for a treat each and every time she steps foot inside the octagon.

Tecia Torres is a Black belt in karate who fights for the infamous American Top Team. Over the years, she has proven to be resilient. In 2017 and 2018, she lost four consecutive fights and was in danger of losing her spot on the UFC’s roster. However, she got her act together in 2020 and 2021, and is now on a three fight win streak. If she wants to bring her consecutive victories number up to four, she has her hands full on Saturday; beating a motivated Mackenzie Dern will not be an easy task. This is one bout fight fans will not want to miss!

Lightweight challenger Vinc Pichel will turn 40-years-old this calendar year. He made his UFC debut ten years ago in 2012, and initially worked as a roadside assistant for AAA in-between training for his fights in the organization. Eventually, he decided that becoming a certified electrician was a better long-term goal. Regardless, no one can accuse Pichel of lacking a work ethic or of giving up on his dreams. His next opponent, Mark Madsen, won the Silver medal in wrestling at the 2016 Olympics in Rio de Janeiro. He is now undefeated in eleven professional fights in mixed martial arts. Their bout on Saturday will feature two of the most determined men in the sport. This should be a good one!

Although middleweight challenger Kelvin Gastelum has lost each of his last two fights, it must be noted that his opponents were Robert Whitaker and Jared Cannonier. Whitaker is a former middleweight champion, and Cannonier is the man who many feel deserves the next shot at reigning champion, Israel Adesanya. The fact that Gastelum was placed in the octagon with fighters of their caliber speaks volumes about how the organization feels about his skill set. Gastelum is still ranked 10th in the division and he is still a dangerous opponent for any fighter.

Gastelum’s next opponent, Nassourdine Imavov, was once the Thunderstrike Fight League’s Welterweight champion. However, since joining the UFC, he has always competed in the middleweight division. He has yet to face a marquee name like Kelvin Gastelum; giving him a chance to compete on the main card at UFC 273 is the organization’s way of seeing if Imavov has what it takes to make it on the big stage.

UFC 273 is available via pay-per-view on BT Sport in the United Kingdom and on ESPN Plus in the United States. As always, we’ll have all the latest updates about the outcomes of the fights as well as in depth analysis available right here at World in Sport! 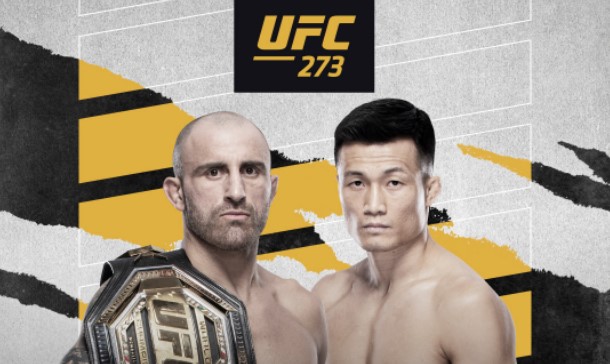