In an incredible display of foreshadowing, the backstage dustup between Khamzat Chimaev and Kevin Holland, ultimately became the co-main event of the evening for UFC 279. This was due to an unprecedented last-minute realignment of the fight card by UFC CEO, Dana White. Chimaev missed weight by almost eight pounds, causing White to change the main event to Nate Diaz versus Tony Ferguson, with Chimaev and Holland being pitted against one another in a fight that was scheduled to last five rounds. There’s a lot to unpack here; without further ado, let’s get into it!

Nate Diaz has spent the majority of his career in the welterweight division. Tony Ferguson, on the other hand, has ventured into the welterweight division occasionally, but has spent the bulk of his career at lightweight. Both men were at a disadvantage heading into this fight because they both spent their training camps preparing for different fighters. However, Diaz’s preparation for a highly ranked fighter like Chimaev served him better than Ferguson’s preparation for Li Jingliang.

Both fighters were relatively cautious at the beginning of round one. Ferguson landed a couple of impressive high kicks in the early portions of the round, while Diaz waited until the latter half of the round to score with well-timed striking combinations. In round two, Ferguson showed that he is not just a kicker; he landed a nice striking combination with his hands that stunned Diaz early. However, Diaz picked up steam in the second half of the round and landed several uppercuts that caught Ferguson off-guard.

In round three, the accumulation of calf kicks by Ferguson started showing visible damage on the right shin of Diaz. The swelling was noticeable and Diaz began walking with a limp. Each subsequent calf kick by Ferguson resulted in wincing by Diaz as he grimaced in obvious pain. However, Diaz stayed true to his reputation and fought through the pain admirably. He began landing punches with increased regularity at the beginning of round four. Halfway through the round, he executed a nice takedown and immediately established a front-facing guillotine chokehold. Unable to prevent Diaz from establishing a tight grip under his neck, Ferguson was forced to tap out, giving Diaz an emphatic submission victory!

Due to Khamzat Chimaev’s failure to make weight for his welterweight showdown with Nate Diaz, he and Kevin Holland were scheduled for a catchweight bout at 180 pounds. Chimaev is an elite grappler with impressive submission skills; entering a fight unprepared against him is a bad idea.

From the opening bell, Chimaev charged at Holland, with no regards for cardiovascular reservoirs. It was clear he wanted to get this fight finished in the first round. He established relentless pressure and secured an early takedown. Holland tried desperately to escape but Chimaev was able to secure a tight chokehold that Holland could not maneuver away from. Ultimately Holland was forced to tap out in the first round.

If Holland were given a full training camp to prepare for Chimaev, it is very unlikely that this fight would have ended in a first round submission. There are some fighting styles that have to be deliberately prepared for because they are unorthodox. Chimaev’s method of charging out of the opening gate, changing levels and going for the immediate grapple, is something a fighter must watch film in order to defend against. Holland and his camp were not given a chance to do this. These two should engage in a rematch with a full training camp; that’s the only fair way to determine how this matchup would unfold under normal circumstances.

Out of all the fighters who accepted the realigned fight card, Li Jingliang took the biggest risk of all. Instead of fighting Tony Ferguson, who came in weighing 171 pounds, in a welterweight bout, he agreed to face Daniel Rodriguez in a catchweight bout of 180 pounds.

Each fighter appeared to be unsure of how to approach the other in the opening minutes of round one. Rodriguez scored using some well-timed jabs that landed on the face on Jingliang and kept him at bay. However, the most impressive moment of the round came near the end, when Jingliang used a side kick to land on the rib cage of Rodriguez. The kick made a visible impact and may have secured the round for Jingliang.

In round two, Jingliang again saved his most impressive maneuver for the waning moments of the round. A left-handed jab that slipped through Rodriguez’s defenses made a clear impact and left him visibly stunned. In round three, Rodriguez made great use of his right jab and scored consistently by slipping the defense of Jingliang, who was clearly more comfortable with kicks than he was with strikes. This was a tough fight to score; all three rounds were very close. Ultimately, Rodriguez was awarded a split decision victory. These two fighters should both be applauded for accepting a new opponent just one day before the fight and being given no time to prepare for them.

Irene Aldana and Macy Chiasson each utilized calf kicks at the beginning of round one to land scoring blows. Eventually, Chiasson decided to increase the intensity and go for a takedown, which she was able to secure. However, Aldana proved to be crafty and immediately placed Chiasson in an arm-bar that almost ended the fight. She dominated the rest of the round with ground control time.

Chiasson turned the tables in round two after avoiding another submission attempt by Aldana. She was able to gain the dominant position on the mat and then pummel Aldana with a barrage of elbows. In round three, the early momentum stayed with Chiasson as she scored yet another takedown. However, as she stood up upon realizing she did not have the position to submit her opponent, Aldana landed a well-timed heel kick to Chiasson’s liver. The kick made an incredible impact and Chiasson immediately crumpled to the mat, unable to continue. It was an emphatic third round knockout victory for Aldana!

After losing each of his last two matches, light heavyweight challenger Johnny Walker needed to return to his winning ways in order to reinsert his name into the elite category in the division. His opponent Ion Cutelaba was determined to prevent this from happening; however, his strategy may have backfired against him.

After attempting a high kick, Cutelaba resorted to using takedowns to subdue Walker. He was able to successfully take Walker to the mat but underestimated Walker’s grappling skills. His attempt to put Walker in an arm-bar was unsuccessful; Walker then fought to his feet and slammed Cutelaba with an emphatic body slam. After several attempts, Walker was able to establish a rear naked chokehold and force Cutelaba to tap out. Johnny Walker is now back in the win column and has re-entered the conversation among title contenders in the light heavyweight division.

In his post-fight interview, Nate Diaz stated that he was going to take a break from the UFC and go show his colleagues how to “dominate another sport.” He also added “Conor McGregor couldn’t do it.” This prompted Joe Rogan to ask “Are you talking about boxing?” Diaz was non-committal and would not confirm which sport he was referring to. However, boxing is the logical conclusion here. McGregor infamously fought Floyd Mayweather back in 2017 and Diaz is also known as one of the best strikers in the welterweight division. At 37-years-old, it’s hard to imagine Diaz transitioning to a new sport and experiencing great success but if anyone can do it, the feisty Nate Diaz can.

The UFC returns next weekend with another edition of Fight Night from The Apex Center in Las Vegas. The main event of the evening will feature bantamweight veterans Cory Sandhagen and Song Yadong in a matchup you won’t want to miss. As always, we’ll have all the latest updates about the outcomes of the fights, as well as in depth analysis available right here at World in Sport! 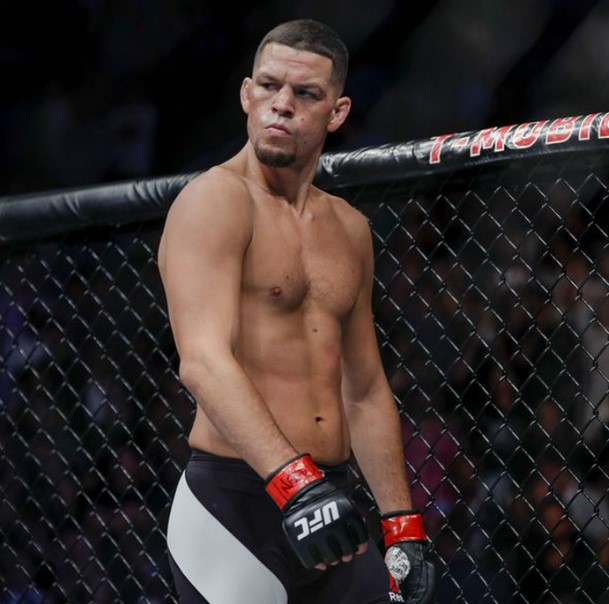