Today’s rendition of UFC Fight Night, featuring Derek Brunson versus Darren Till, resulted in four stoppages and one unanimous decision. To say it was an action packed main card would be a gross understatement. Without further ado, let’s get into it!

Derek Brunson vs. Darren Till

Going into the fight, there was a widespread opinion that Till would win if the two men stayed on their feet and exchanged strikes, while Brunson would win if the two men went to the mat and grappled. Having been an All-American wrestler during his college days, Brunson is one of the best grapplers in the entire organization. Today, he put those skills on display for the world to see.

Early in round one, Brunson looked for his opportunity to take Till to the mat. He was able to do so by going low, grabbing Till’s legs and driving him to the ground. After forcing his opponent into a grapple, Brunson then established dominant position and proceeded to ground and pound Till for a large portion of the round. Till was able to force his way back to his feet with about a minute left, but the round clearly belonged to Brunson.

At the beginning of round two, Darren Till landed a couple of nice strikes. If he could have kept the fight going standing up, the odds would have been in his favor. Unfortunately, Derek Brunson had other plans. He again forced Till to the mat and tried to pummel him with strikes. Till did a better job of defending himself in the second round than he did in the first, however, his right eye was almost swollen shut at the end of the round.

Till showed why he has such a great reputation as a striker to start round three. He rocked Brunson with a couple of shots that clearly hurt him. However, Brunson is a veteran fighter who knows how to defend himself even when he’s hurt. Instead of giving in to Till’s pressure, Brunson grabbed his opponent’s legs and used his momentum to force another takedown. He then establish a rear naked chokehold, which forced Till to tap out. It was an impressive victory and one of the best examples of fighting through adversity. Most fighters would’ve been forced to the mat after Till’s strikes; Derek Brunson’s years of experienced payed dividends and allowed him to know how to counter an elite attack.

Immediately after the fight, Brunson ran to the camera and verbally challenged Israel Adesanya to a fight. The two of them fought in 2018, with Adesanya coming out victorious. However, since then Brunson has won five consecutive fights and looks to be in the best form of his career. In 2018, neither man held a title; now Adesanya is the reigning UFC middleweight champion. It will be very interesting to see what happens next.

Initially the two men looked to respect one another’s power; they were hesitant to clash and both appeared to be playing it safe. However, once the two men found themselves in a clinch in the middle of the octagon, Tom Aspinall made his presence known. He first started with a knee to Sergey Spivak’s ribs. He followed that up with a spinning elbow to his opponent’s face that sent him sprawling into the cage. Knowing he had to capitalize on the momentum, Aspinall jumped on Spivak and began to ground and pound him with a barrage so intense the referee was forced to stop the fight. It was an exciting first round knockout for Aspinall; he’s definitely one to watch in the heavyweight division.

Round one was fairly even. Neither fighter dominated but Morono did just enough to swing the pendulum in his favor. His overhand right to Zawada’s jaw clearly had an affect and was the only momentum shifting moment of the round.

Zawada did some good body work to Morono in round two with his striking; he also landed a couple of well timed kicks that left an impression. However, Morono had three well-timed strikes that prevented Zawada from ever mounting a real attack. Not only was his counter punching elite, but they seemed to have strategic placement as well. One strike came near the beginning of the round, one near the middle, and one near the end. Morono was never hurt and Zawada clearly felt his opponent’s blows. Advantage Morono.

Knowing he was down on the judges’ scorecards, Zawada was very aggressive to start round three. Unfortunately, his zeal left him vulnerable and Morono was able to send him crashing to the mat early in the round. He continued to land big strikes before scoring a huge takedown to finish the round. All three judges scored the fight 30 to 27. It was an impressive unanimous decision for Morono; it will be interesting to see where he lands when the new welterweight rankings are released.

Khalil Rountree was very aggressive to start the round; it almost appeared as if he had his mind set on a first round stoppage. While Bukauskas was able to slow Rountree’s momentum and survive the round, he was left with a badly disfigured nose as he staggered back to his corner. Not only that, his legs were bleeding from the barrage of calf kicks Rountree managed to work in while he was busy striking.

In round two, Bukauskas looked like he was ready to join the fight. He did not allow Rountree to overpower him and he became much more active with his striking. However, he made a costly mistake by leaning in too far while attempting a headshot. Rountree saw an opening and placed a well-timed side kick to the knee of his opponent, causing it to bend the wrong way. Bukauskas crumpled to the mat in pain and Referee Herb Dean immediately stopped the fight. While there is still no word on the severity of Bukausas’ injury, he did leave the octagon with his leg in a brace which seems to indicate that it may indeed be broken.

Rountree is an athletic 6’1″ tall, weighing a solid 205 lbs. He’s going to be a problem for any opponent he faces in the light heavyweight division. Fans should keep and eye on him; he could very well be moving up to pay-per-view events in the near future.

Paddy Pimblett hails from Liverpool, England and has garnered one of the biggest followings in all of mixed martial arts. His fans follow him from arena to arena and his cheering section is always the loudest. That’s impressive for a fighter who had never competed in the UFC until today.

Luigi Vendramini stated in the pre-fight interviews that he felt disrespected by the narrative that he was merely a subplot to Pimblett’s organizational debut. In the early parts of round one, it looked as if Vendramini would make good on his promise to turn the story around. Pimblett has a bad habit of leaving his hands low while looking for any opening his opponent may provide. He also fails to tuck his chin whenever he throws a jab leaving himself exposed and vulnerable. Vendramini exposed these tendencies by landing a few overhand left hooks that clearly rocked Pimblett. However, with one minute left in the round, Pimblett landed an overhand right that badly hurt his opponent. He followed it up with a barrage of punches that rendered Vendramini defenseless. The referee intervened and stopped the fight. Paddy Pimblett won his UFC debut with a first round stoppage; to let him tell it, a star is born. That remains to be seen.

Israel Adesanya is already slated to fight Robert Whitaker in his next bout. Derek Brunson says he wants Adesanya so bad that he’ll wait until after his fight against Whitaker to become his next opponent. That could mean a layoff of six months or more for the 37-year-old Brunson. That may not be a good idea. He’s on a really nice win streak right now but inactivity is not an aging fighter’s friend. Manny Pacquiao looked every bit of 42-years-old during his recent failed comeback attempt. Hopefully Brunson’s camp advises him against taking an extended break; another tune-up fight before possibly facing Adesanya sounds like a much wiser move.

The next UFC Fight Night will take place in two weeks, when Anthony Smith and Ryan Spann meet in the main event. It will be a clash of two of the best light heavyweights in the organization. The event will again take place at the Apex Center in Las Vegas. As always, we’ll have all the latest updates and in depth fight analysis available right here at World In Sport! 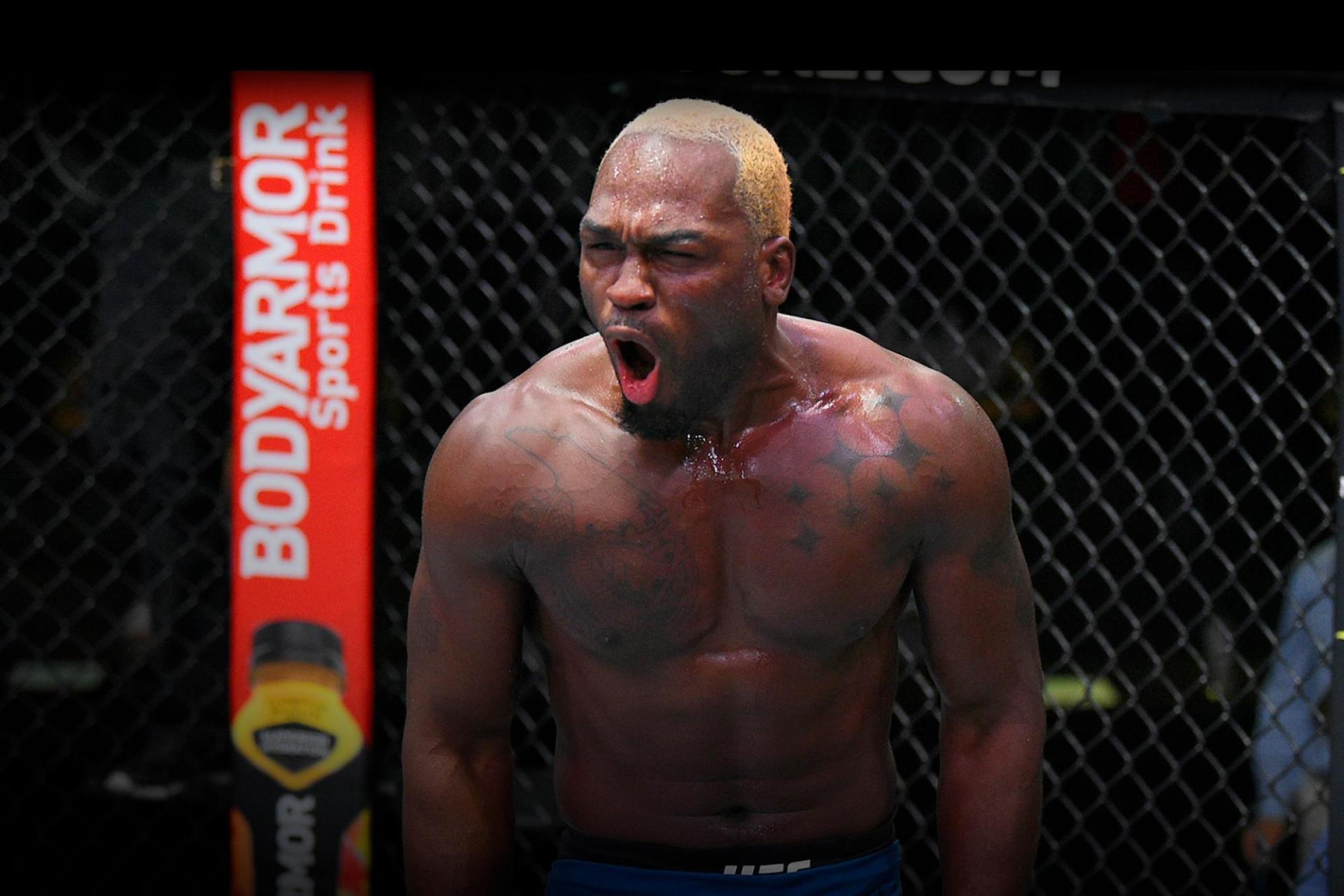