When I was very young, ESPN used to air a weekly program called Friday Night Fights. It was on this program that I first witnessed Roy Jones Jr. in action. I immediately became a fan of Jones, and subsequently fell in love with the sport of boxing. Later, Jones would go on to become a world champion and one of the premier faces in the sport. However, it was his incredible quickness and unmatchable reflexes that impressed me long before he was a household name. For the rest of Jones’ career, as his fights moved from cable television to pay-per-view only, I rooted for Jones every time he entered the ring.

My point in telling this story is that I haven’t had a favorite fighter since Roy Jones retired but I still watch every major boxing and mixed martial arts event whether its on pay-per-view or not. As an adult, I never root for one fighter over the other; I understand that each participant is providing for their family and I just want to see a good clean fight. The keyword in that sentence is clean. Paulo Costa did a disservice to mixed martial arts this week and although he didn’t use performance enhancing drugs, he did something almost equally as foul. He intentionally came into the fight twenty pounds over weight. For that reason alone, I had no choice but to root for Marvin Vettori to beat him in the octagon and teach him a lesson about fair competition.

Initially, the two fighters agreed to a middleweight bout with a limit of 185 lbs. A few days before the fight, Costa’s camp sent word to Vettori’s camp that their fighter would not be able to make weight and asked if he would agree to fight at 195 lbs. Vettori is notorious for being one of the most competitive men in mixed martial arts so he agreed to continue on with the fight. Then the day before the fight, Costa’s camp had the unmitigated gall to approach Vettori’s camp a second time; this time they asked for the fight to be moved up to light heavyweight at 205 lbs. Marvin Vettori again agreed to accept the fight. Bumping a fight up from middleweight to light heavyweight with little to no notice is unheard of. Marvin Vettori could have easily declined the fight and no one with common sense could vilify him for it. The fact that he agreed to fight on unacceptable terms speaks volumes about his courage and toughness.

As I’ve already stated, I was biased going into UFC Vegas 41. I have no shame in openly stating that I was rooting for the athlete who played by the rules to win the fight. Nonetheless, Costa versus Vetori was a very entertaining bout to watch. Without further ado, let’s get into it!

Marvin Vettori was very active to start round one. He is a versatile fighter who is good on the mat during a grappling exchange, but is also an elite striker. In the opening round against Paulo Costa, Vettori opted to lean heavily on his striking abilities. Costa was not flabby or chubby due to the extra weight he was carrying; on the contrary, he still looked as if he had very little body fat. That is indicative of a fighter who spent extra time in the weight room and had no intentions of making the designated lower weight limit. I point this out to illustrate the point that, although Costa’s added weight was clearly muscle, it is still harder for the heavier man to achieve great cardiovascular fitness. By the end of round one, Costa was clearly fatigued.

In round two, Costa came alive. He landed a couple of high kicks to Vettori’s head that clearly made an impact. Overall, his legs looked very strong and every kick he made landed with a thud. Even his calf kicks looked powerful, although he normally opted for kicks to the midsection and high kicks to the head. Vettori countered by scoring a takedown with close to two minutes left in the round. Costa was able to quickly fight to his feet. With close to a minute and a half left in the round, Costa poked Vettori in the eye. It wasn’t an egregious poke, but the referee still deducted a point from Costa because he’d been warned about his fingers earlier in the round.

Rounds three and four were very even. Costa’s best moments again came with his feet; he is an elite kicker. Vettori on the other hand relied on striking and he landed early and often. In round five, Costa landed an increased amount of kicks to Vettori’s midsection which clearly made an impact. At the end of the fight, both men were clearly fatigued and Costa was bleeding from his nose. There was no post-fight hug or handshake. These two men still don’t like each other and I’m fine with that.

Marvin Vettori was given a unanimous decision victory by the judges. This was a close fight but I do believe the judges came to the right decision. Although Costa clearly had his moments, Vettori was the more active fighter and it was Costa who walked out of the octagon a bloody mess. Although I wanted Vettori to win, I wouldn’t have applauded an incorrect decision by the judges. Vettori took the fight to Costa and he earned this victory fair and square.

Grant Dawson had one of the biggest drop offs between rounds that I have ever seen in all my years of watching combat sports. He was dominant in rounds one and two, and then looked as if he did not belong in the octagon with Rick Glenn in round three.

In round one, Dawson scored an early takedown and then began to pummel Glenn with strikes. Glenn did everything he could to survive the round. In round two, Dawson again scored an early takedown and I fully expected him to earn a stoppage. Instead, Glenn found a way to survive again. In round three, the tables turned on Dawson as his lack of conditioning got the best of him. Not only did Glenn dominate from start to finish, but he had a chokehold against Dawson that was so fierce that the referee almost stopped the fight and declared him the winner by TKO.

The judges ultimately declared this a majority draw. I would’ve scored this the same way. I would’ve given Dawson a one point advantage in rounds one and two, and I would have given Glenn a two point advantage in round three. As a fan, I hope these two agree to a rematch. This was one of the strangest seesaw battles I have ever seen. It feels like there is still unfinished business between these two competitors.

Jessica-Rose Clark made her return to the octagon after an extended layoff tonight. Her opponent, Joselyne Edwards, had no answer for her grappling or her strategy. This fight was won on ground control time and takedowns scored. Clark comes from a wrestling background and she prevented Edwards from ever displaying her striking skills. At the conclusion of this fight, neither athlete looked hurt or injured; given the nature of the fight that would be impossible. Clark was given a unanimous decision victory. It is rumored that several fans in attendance had to be nudged back awake after falling asleep during the match.

Seung-Woo Choi started round one with a nice overhand right that sent Alex Caceres to the mat. As he was attempting to get up, Caceres was hit with a knee to the head by Choi. This was ruled an illegal blow because Caceres still had a knee on the mat, meaning he was still grounded. The referee temporarily paused the fight but no points were deducted.

In round two, Caceres pulled off an impressive acrobatic maneuver. He spun out of Choi’s line of vision and proceeded to mount his back. He then placed Choi in a chokehold and cut off his air supply until he had no choice but to tap out, as the two men went from a standing position to a pile of bodies on the mat. It was a spectacular ending to what appeared to be a bout between two evenly matched fighters. There is no substitute for experience and Caceres’ bag of tricks proved to be too much for Choi to handle tonight.

In round one, Francisco Trinaldo and Dwight Grant both opted to rely on a striking attack. There was just one problem; neither one of them landed very often. In the last sixty seconds, Trinaldo stole the round when he landed two high kicks to Grant’s head. It was easily the best action of the round.

In round two, Grant intercepted another one of Trinaldo’s kick attempts and used his momentum to score a takedown. Trinaldo was able to fight his way to his feet and remain aggressive. Early in round three, Trinaldo hit Grant with a low blow which caused the referee to pause the fight while Grant recovered. Almost immediately after the fight restarted, Trinaldo hit Grant with a poke in the eye. The referee deducted a point this time because Trinaldo had been warned about his fingers in round two.

The judges gave Trinaldo a split decision victory. In my opinion, he clearly won the fight. The only conclusion I can come to is that the lone judge who did not give Trinaldo the win was effected by the eye poke and subsequent point deduction.

Ike Villanueva talks about his wife and his young sons in every interview he does. The boys play American Football and he is their youth league coach. His family is clearly his motivation for getting in the octagon. It’s great to see the human side of these athletes who put so much on the line every time they compete against one another.

Nicolae Negumereneanu started round one by scoring a few calf kicks against Villanueva. The two men then engaged in a striking exchange, where Negumereneanu landed a punch to the back of Villanueava’s ear that sent him to the mat. Once he was on the mat, Negumereneanu hit his opponent with a barrage of strikes, some of which were clearly illegal back-of-the-head punches. However, the damage had been done and the referee stopped the fight. Negumereneanu walked away with a first round TKO victory.

It is time for Paulo Costa to become a light heavyweight and accept the fact that his body has grown out of the middleweight division. He is too good of an athlete to have something like cheating attached to his name. What he did this weekend was not respectable, but he can bounce back from it if he embraces his true identity, a well-built 205 pounder who can compete in the light heavyweight division if he chooses to do so. However, one more stunt like the one he pulled this weekend will earn him a well-deserved suspension.

UFC Fight Night returns next week with a lineup headlined by light heavyweights, Jan Blachowicz and Glover Teixeira. The fight will take place at Etihad Arena in Abu Dhabi. As always, we’ll have all the latest updates about the outcomes of the fights, as well as in depth analysis available right here at World In Sport! 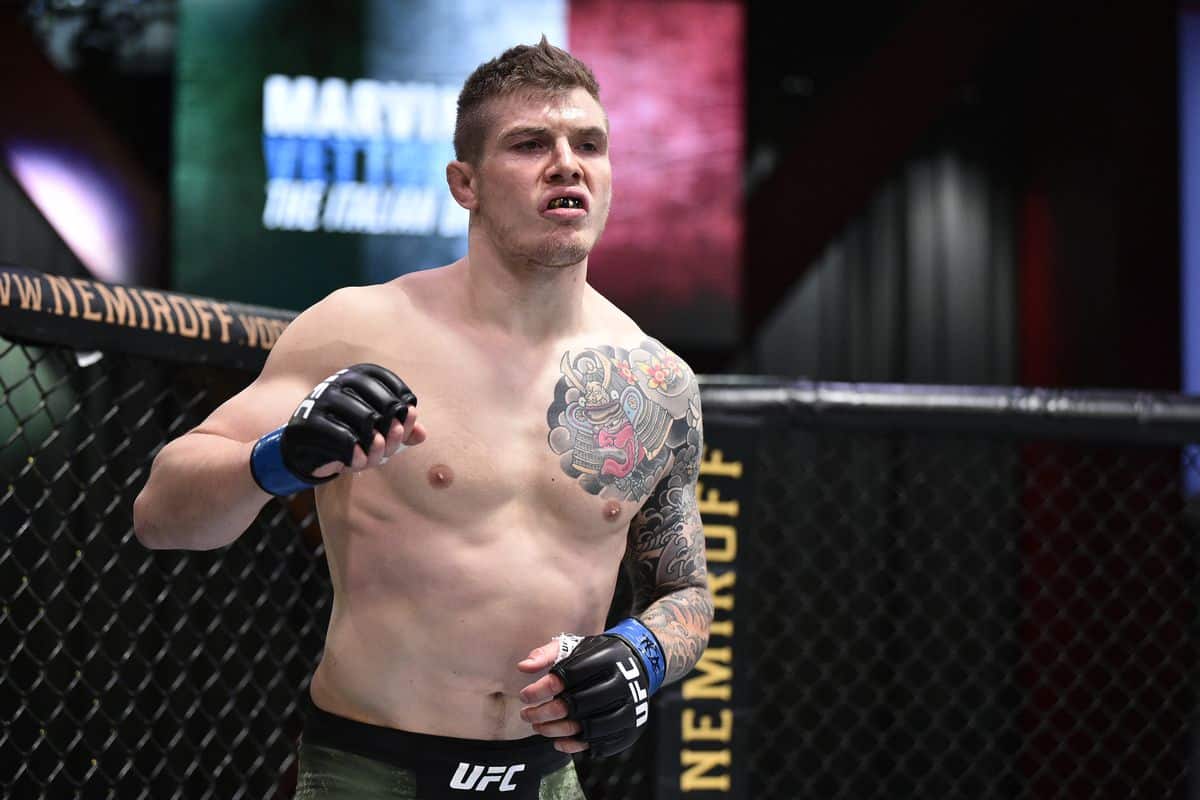