The famous 19th Century abolitionist, Henry Ward Beecher, once said “Men’s best successes come after their disappointments.” For Brian Ortega and his camp, they can only hope these eloquent lines come to fruition. While UFC Long Island was an overall success, the anticlimactic way in which the main event of the evening came to a close will not soon be forgotten. Although Ortega was visibly disappointed in losing due to an injury that rendered him unable to continue, the grace with which he handled the moment should be applauded. There’s a lot to unpack here; without further ado, let’s get into it!

Early in round one, featherweight contender Yair Rodríguez, made great use of the left jab. He landed several times throughout the course of the first minute and a half and Brian Ortega quickly made adjustments. He began to backpedal and make use of calf kicks to create space. With about a minute and a half left in the round, Rodríguez scored a takedown which seemingly put control of the fight firmly in his grasp. A couple seconds later, he strangely stopped grappling and stood up. Meanwhile, Ortega lay on the mat, grimacing in pain. Watching this in real time it was hard to understand what was going on.

Moments later, it was announced that Brian Ortega’s shoulder had popped out of socket. The replay angles clearly showed the moment when his surgically repaired shoulder slipped out of place. He was visibly in pain and absolutely unable to continue. This was unfortunate because, even though Yair Rodríguez was in control of the first round, I fully expected this fight to go the distance. Ortega is a great featherweight who pushed reigning champion Alexander Volkanovski to the absolute limit during his last performance.

While ending the main event of the evening on an injury was certainly far from an ideal outcome, the fans in Long Island were gracious, giving both athletes a polite round of applause and understanding that injuries are a part of sports. Both Brian Ortega and Yair Rodríguez should remain in the top five in the division when the new rankings are released later this week. Unfortunately, neither man will receive the career boost that they each expected from today’s performance.

Women’s strawweight challenger Michelle Waterson had a clear strategy heading into the fight. Her opponent, Amanda Lemos, is notorious for being an elite striker who can end a fight with a single blow. In order to combat this, Waterson decided to use front kicks early in round one to land scoring blows while also creating space and maintaining distance. With a little under a minute left in the round, Waterson executed a beautiful level-change and surprised Lemos with a takedown.

In round two, Lemos was able to close the distance and repeatedly land body shots. In the sport of boxing, announcers often refer to blows like these as “investing in the later rounds.” The idea is that an accumulation of punches to the torso eventually robs the opponent of their cardiovascular strength and can lead to a knockout later in the fight. Indeed, the body punches Lemos landed did appear to be a great investment.

Growing tired of being repeatedly punched in the ribs and abdomen, Waterson attempted to tackle Lemos. This was clearly done in frustration. The expert level-change that she executed in round one was gone. This time she unwisely went for the maneuver without properly setting it up. Lemos saw the mistake and capitalized. She used Waterson’s momentum against her and allowed her to land on the mat; unfortunately for Waterson she landed inside of a tight guillotine choke established by Lemos. The grip was too tight and Waterson was forced to tap out or lose her air supply. This was a display of great octagon savvy by Lemos and another impressive victory.

Welterweight prospects Li Jiangling and Muslim Salikhov are two of the most accomplished mixed martial artists in their division. Jiangling is the first fighter from Tibet to appear in the UFC, meanwhile Salikhov is a decorated kickboxer who traveled the world accumulating victories before he decided to give mixed martial arts a try. Today, both men attempted to make a name for themselves in the first main card appearance of each athlete’s career.

Salikhov was aggressive early in the fight, immediately attempting a spinning back kick. However, Jiangling seemed prepared for this tactic and blocked the maneuver. Realizing that his opponent was prepared for his kicking attack, Salikhov switched to grappling, scoring an impressive takedown and getting a lot of ground control time in his favor throughout the duration of the round.

In round two, Jiangling scored on repeated calf kicks. It would seem that Salikhov would have better defense against this maneuver from his years of kickboxing experience but he seemed truly unprepared. The strategy worked in Jiangling’s favor; the kicks wore Salikhov down and he was able to score a massive overhand right with just under a minute to go. With a little under 30 seconds left in the round, Jiangling again landed a vicious overhand right this time sending his opponent crashing to the mat. Jiangling seized the moment, pouncing on his opponent and pummeling with elbows until the referee was forced to call a stoppage. It was an emphatic statement by Jiangling that he is going to be a force to be reckoned with in the welterweight division for years to come.

Flyweight performers, Matt Schnell and Su Mudaerji engaged in a battle that was so fast paced that the Long Island crowd was shouting the entire match. Even the most raucous sports venues have the occasional lulls in excitement, but the audience was clearly entertained throughout the duration of this bout.

At the beginning of round one, both men repeatedly tried to land strikes with little success. Finally, Schnell wisely implemented a level change that caught Mudaerji off guard. He landed an emphatic takedown but Mudaerji quickly fought to his feet. For the remainder of the round, the two men exchanged blows with neither able to establish a clear advantage.

A little over a minute into round two, Mudaerji landed a left hook that sent Schnell crashing to the mat. He pounced on his opponent and began scoring repeatedly with elbows and strikes; it looked as if Schnell would soon succumb to the assault and not survive the round. However, Schnell showed incredible resolve and not only survived but fought to his feet and scored a takedown of his own. He then pummeled Mudaerji before establishing a guillotine chokehold on the mat. Finally, the referee stepped in and stopped the fight. Mudaerji was knocked out cold, having passed out from the guillotine choke that cut off his air supply. It was an amazing performance by Schnell and the most exciting moment of the main card.

Featherweight prospects Shane Burgos and Charles Jourdain engaged in a seesaw battle that was fun to watch and difficult to score. Early in round one, Burgos applied consistent forward pressure in order to force Jourdain to backpedal. Eventually, he was able to close the gap and score two takedowns during the round. He established a body triangle, but Jourdain’s defense prevented the submission and he survived the round.

In round two, Burgos executed a standing back mount and eventually wrestled Jourdain to the ground. However, Jourdain once against showed grit and determination and refused to submit to his opponent. In round three, Jourdain was dominant. Burgos was fatigued from the incredible output of energy in the first two rounds. Jourdain capitalized on this and landed several impressive striking combinations. Ultimately, Burgos was awarded a split decision victory.

I agree with the judges’ decision but I also feel that Burgos was saved by the fact that this was a three round fight. Had this been scheduled as the main event, and this been five rounds, Jourdain would have won. He was clearly the better conditioned athlete and the momentum was on his side. However, one cannot fault Burgos for fighting a clever fight and playing the hand he was dealt so wisely.

Flyweight contender Lauren Murphy was not discouraged by the fact that her opponent, Miesha Tate, had a large contingency of fans support in the arena. That is to be expected when your foe is certainly destined to be in the organization’s Hall of Fame one day. However, in the here and now, Murphy wisely viewed Tate as just another opponent and went about her activities inside the octagon with a “business as usual” approach.

Round one was largely a grappling affair. Murphy scored two takedowns and Tate was able to secure a takedown of her own in the latter stages of the round. In round two, the two women resorted to striking, with Murphy getting the best of most exchanges. In the midst of all of this, Murphy managed to score a takedown and cause Tate to have a bloody nose. Although Tate scored a takedown early in round three, Murphy stole the momentum with repeated elbows which caused visible swelling under Tate’s left eye.

For her efforts, Murphy was awarded a unanimous decision victory. With this win, Murphy has proven that she is still a top contender in the division. I would not be surprised if the organization doesn’t reward her by giving her another shot at the reigning champion, Valentina Shevchenko, in her very next fight.

I was very impressed with Matt Schnell’s performance tonight. Su Mudaerji was not only a worthy opponent, he came to fight and had some great moments of his own. I still have no idea how Schnell survived the vicious onslaught that was laid upon him in the second round by Mudaerji. Not only did he display an amazing chin, but to turn things around and secure a victory by submission in the same round was truly remarkable. After today’s performance, he is truly deserving of another opportunity to perform on a main card in front of a sold out arena.

The UFC returns to London, England next week for the second time this year. The main event of the evening features heavyweight contender Curtis Blaydes going up against England’s homegrown challenger, Tom Aspinall. Paddy Pimblett, another English fighter, will also participate in the main card. The crowd should be raucous and the event should be fun. As always, we’ll have all the latest updates about the outcomes of the fights, as well as in depth analysis, available right here at World in Sport! 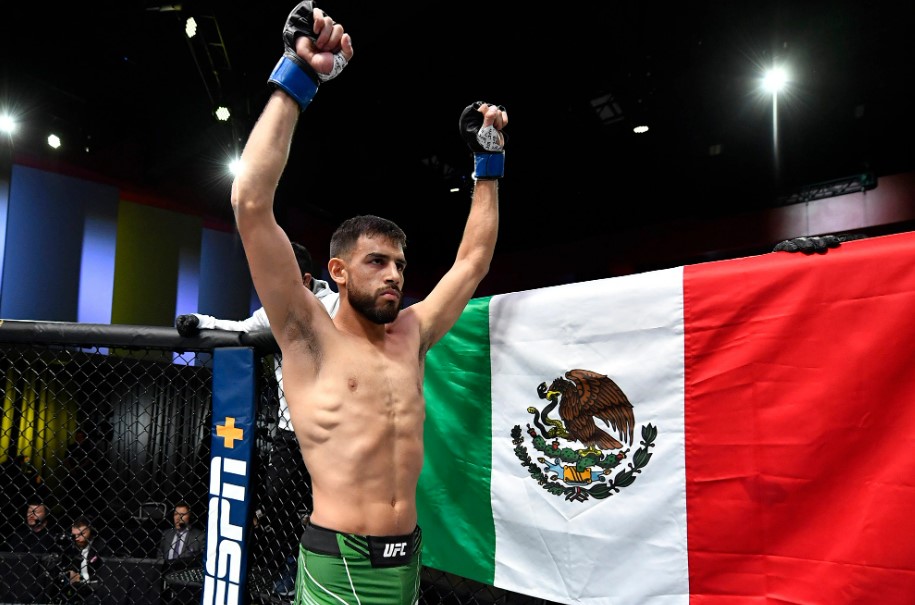