Joe Weatherley’s career-best score sees Hampshire into a dominant position against Somerset on Day 2 of the opening round of County Championship action.

Mark Steketee would be caught by Ben Compton off the same bowler for 3 before debutant Matt Critchley (pictured below) would be the final man out, bowled by Tawanda Muyeye for 132 – Sam Cook was 11 not out.

Kent would lose one man before the close of play as Daniel Bell-Drummond would be LBW to Sam Cook for 11 with Compton and Muyeye finishing 47 and 43 not out respectively.

James Vince would be LBW to Marchant de Lange for 56 before Ben Brown would be caught by Kasey Aldridge off the bowling of Green for 18. Felix Organ would be bowled by the same bowler for 21 before James Fuller would be caught by Steven Davies off the bowling of Siddle for 17. Kyle Abbott would be bowled by Green for a golden duck before Keith Barker would be the final man out, run out by Aldridge, for 18 – Mohammad Abbas finished 4 not out.

Somerset would see off the final 6 overs of the day with Green and Tom Lammonby resuming 8 and 7 not out this morning.

Gloucestershire would have 3 overs to survive with Charlesworth dismissed, LBW to Sanderson, without scoring – Dent and Bracey both finishing 2 not out.

Kemar Roach would be the final man dismissed, caught by Sam Hain off the bowling of Briggs for 4, with Ben Foakes (132, pictured below) and James Taylor (31) the not out batsmen as Surrey would declare.

ALSO READ:  England: Top 5 Issues With The Test Side

In their reply, Warwickshire would see Dom Sibley bowled by Reece Topley for a golden duck before Will Rhodes would be caught by Foakes off the bowling of Roach for 6 with Yates and night-watchman Briggs resuming on 10 and 0 respectively.

Chris Cooke would be caught by Liam Trevaskis off the bowling of Coughlin for 59 with Michael Hogan the final man out, bowled by Chris Rushworth, for 4 – Michael Hogan finishing 4 not out.

Durham would have one over to survive with Alex Lees and Michael Jones finishing 1 and 4 not out respectively.

Resuming on 118/4, the visitors would add 21 to their overnight score before Ed Barnard would be LBW to Ed Barnes for 57 with Ben Cox caught behind by Harry Swindells off the same bowler for 6. Captain Brett D’Oliviera (pictured below) and Joe Leach would put on 127 for the seventh wicket partnership before the latter would be caught by Barnes off the bowling of Colin Ackermann for 70 with Josh Baker falling LBW to Barnes for 15.

Ben Mike would take the final two wickets, firstly Charlie Morris would be bowled for 8 before Dillon Pennington would be caught by Swindells for 2 – D’Oliveira finishing 118 not out.

Ethan Bamber would be dismissed by the same combination for 7 before captain Tim Murtagh would be LBW without scoring – Tom Helm finishing 30 not out.

Captain Billy Godleman would be bowled by Murtagh for 23 before Guest would be caught by White off the bowling of Helm for 2. Shan Masood (pictured below) would be stumped by Simpson off the bowling of Joshua de Caires for 91 before Madsen would be the final wicket to fall, LBW to Bamber, for 34 – Leus du Plooy (12) and Luis Reece (8) resuming this morning.

Resuming on 302/6, the hosts would add 30 to their overnight score before Tom Clark would be bowled by Lyndon James for 100 with Steven Finn LBW to Liam Patterson-White (pictured below) for 10. Archie Lenham would be caught by Ben Slater off the bowling of Luke Fletcher for 24 before Henry Crocombe would be LBW to Patterson-White for 16 – Jamie Atkins was 3 not out.

In reply, Notts would lose Slater as he was bowled by Crocombe for 1 before Haseeb Hameed was caught behind by Oliver Carter off the bowling of Finn for 5. Joe Clarke would be dismissed by the same combination for 6 before Ben Duckett would be caught by Tom Alsop off the bowling of Atkins for 31.

James and Steven Mullaney would put on 108 for the fifth wicket before the former would be dismissed by the Carter/Finn combination for 63 with Mullaney and Tom Moores finishing 79 and 23 not out respectively. 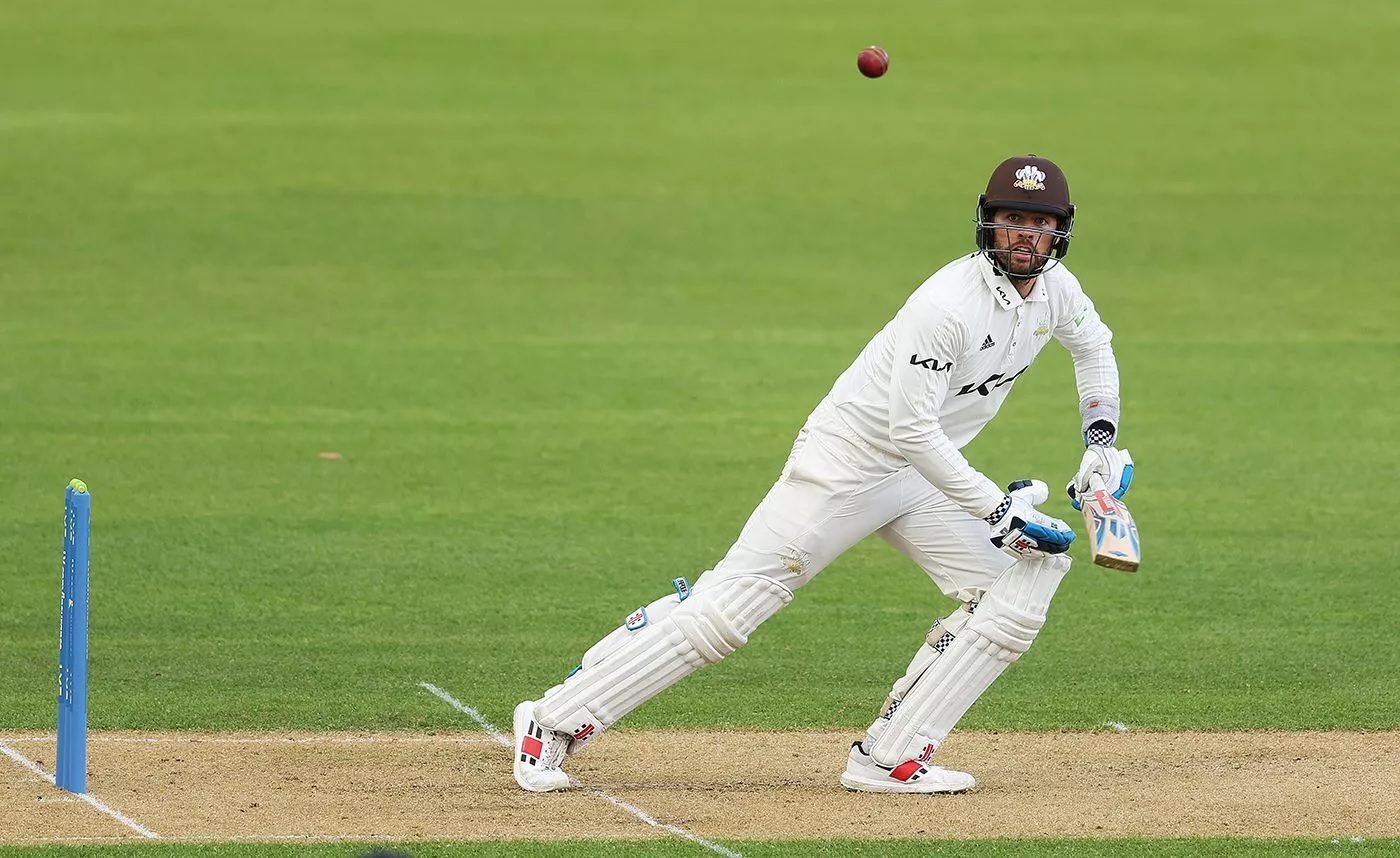