West Indies and Sri Lanka have been battling it out in a two-match test series over in the Caribbean, and after the first test ended in a draw, it meant it all came down to the second and final Test in Antigua and Barbuda and the Sir Vivian Richards Stadium to see who could win the series.

The Sri Lankans went into the final day 29/0 having survived a nine over blast from the West Indian bowlers late on Day Four, and with an unlikely target of 377 needed for the tourists to win the test and the series, it was really all about if the Windies could knock over the ten wickets needed to win this test and take them above their opponents in the Test Rankings. If Sri Lanka were to pull off the impossible and win this though it would mean a first-ever series win in the Caribbean, that was a tall order.

How did we get to this stage in this test then? Well, the West Indies batted first on Day One and posted 354 all out in their 111.1 overs, skipper Brathwaite batted for 514 minutes in his brilliant 126, he was the glue in the Windies first innings but was aided by a blistering 73 from 92 balls by Cornwall as they put on an eighth-wicket partnership of 103 which certainly boosted the hosts’ first innings total. The pick of the Sri Lankan bowlers was Lakmal who took 4-94 in his 28 overs.

Sri Lanka responded with 258 all out in 107 overs which meant the West Indies had a healthy first-innings lead, opener Thirimanne netted his third straight fifty in the series with 55, whilst Nissanka, who was playing in just his second test and had scored a fifty and a century on debut in the First Test, netted another fifty in this one with a useful 51, Roach was the pick of the Windies bowlers taking 3-58 in his 18 overs.

Much of Day Three was lost due to weather though although in the 42.1 overs that did take place the West Indies took five wickets, and it meant going into Day Four Windies needed to take the final two wickets of this innings so they could get into bat and set a target, and they did, meaning early on Day Four West Indies began that target setting.

Braithwaite was on form again, hitting a 299 minute 85 as he along with Mayers (55) and J Holder (71 not out) saw the Windies declare on 280/4 off 72.4 overs, setting the Sri Lankans a target of 377 with nine overs and the whole of Day Five to realistically survive and grab a draw and draw the series as a result.

Thirimanne and skipper Karunaratne as said above managed to survive the forty minutes of batting late on Day Four, and it set up an intriguing final day in Antigua and Barbuda, the tourist would have to bat well and dig in you would have thought, but it wasn’t going to be easy for the West Indies bowlers either and they would have to work hard to get the ten wickets needed to win.

One note before the fifth day though was the injury to Sri Lankan bowler Embuldeniya, who was stretchered off the field on Day Four after injuring himself whilst fielding, so if he was unable to bat then that was one less wicket for the hosts to get.

So how would this pan out? Sadly, the weather gods were not playing ball and the start of the day was delayed by rain and with every passing minute and over lost, the task would become more and more difficult for the Windies, whilst for Sri Lanka, this was just what they wanted as they would need to bat less and less time the more it rained.

ALSO READ: A Club vs Country Debate Ahead of IPL

The day finally got underway just over an hour after the planned start, and after two overs they were back off again for a heavy rain shower, which was frustrating for the hosts, to say the least, but after they came back out the tourists managed to take advantage of the friendly batting conditions and get to lunch without losing a wicket and be on 93/0 off 34 overs.

It could have been so different had West Indies wicketkeeper Da Silva held on to a leg-side catch off the bowling of Gabriel when the score was 38/0, and it would have got rid of in form batsmen Thirirmanne too, but the catch was shelled and it didn’t help the Windies mood which was rather subdued and lacking any sort of belief and urgency, that wicket could have changed that but instead, it was pretty much the only major moment of the morning session, and Sri Lanka was well on their way to drawing this test, the Windies needed to bowl much much better with a lot more intensity in the afternoon/evening sessions if they had any chance of winning this one.

The two opening batsmen, Thirimanne (37 not out) and skipper Karunaratne (54 not out) had played well and looked pretty comfortable, they were hoping for more of the same for the remainder of the day, and early in the afternoon session came a big blow for the West Indies when Gabriel, their bowler with the x-factor, pulled up with what looked like a hamstring injury whilst coming into a bowl, and you felt at that moment it wasn’t going to be his or the hosts day.

Soon after though in the 39th over and with the score of 101/0 the Windies grabbed the breakthrough when Thirimanne was caught in the slips by Cornwall off Joseph, and the Sri Lankan was gone for 39, the first time in the series he has failed to reach fifty, would it start a charge towards victory for the hosts?

Initially, thereafter Joseph and Cornwall put pressure on the two Sri Lankan batsmen, Karunaratne and O Fernando, with Cornwall especially causing some problems with his off-spin, but after they were seen off, the game went back to drifting along with the batsmen finding things comfortable on a flat and rather docile surface.

Medium fast bowler Mayers then came on, he is the golden arm of the West Indies in this series and seems to get important wickets, and he began to get the ball swinging into both batsmen, and after he thought he had got Fernando LBW, but saw it overturned after the ball was deemed doing to much and missing leg stump, he got skipper Karunaratne plum LBW for 75, and the tourists were 146/2 in the 56th over, a glimmer of hope for West Indies perhaps?

West Indies thought they had Fernando caught at leg slip by bat-pad method off the bowling of Cornwall, but the ball had missed the bat by about two inches, and it was probably a review in desperation from the hosts as overs were now running out, as Sri Lanka reached Tea on 146/2 and with only 35 overs left in the Test Match now it seemed almost certain that this game would end a draw.

It was safe to say that after the Tea break both teams seemed to be going through the motions and had settled for a draw or were at least resigned to the fact that this one was going to end as one, so it was played in a rather relaxed atmosphere as both teams wound down to the end of this test match and series.

O Fernando made use of the rather friendly battin\g conditions in the final part of this game and scored a decent unbeaten 66 as the Sri Lankans ended on 193/2 off 79 overs with the captains shaking hands fifteen overs before the close of play, not the final day many wanted if truth be told but both sides would no doubt take many positives from this two-test series.

ALSO READ: A Club vs Country Debate Ahead of IPL

Here is a quick summary of the Test Match:- 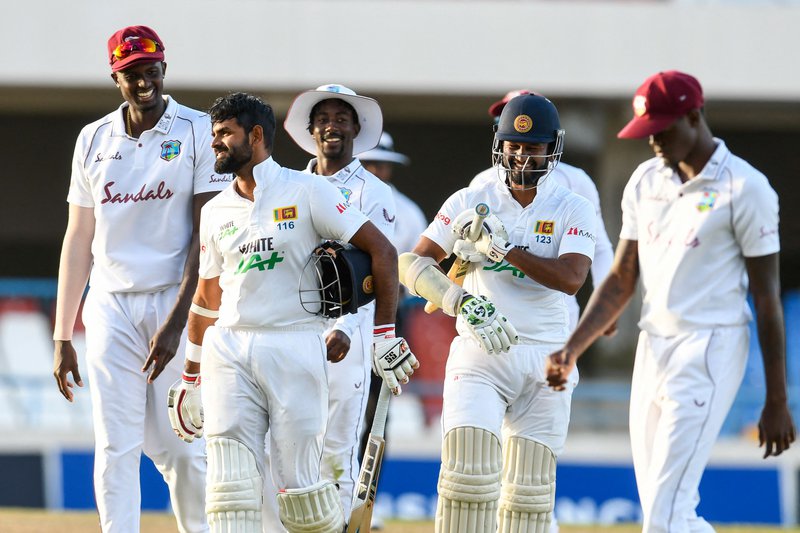