Well, well, well, how on Earth did the Lions get away with that?

You’d have been forgiven for switching off your television at half time on Saturday if you were proudly sporting a replica of the famous Lions jersey, such was the dismal display which the men in red put out in the first half of their clash against the defending World Cup champions. A lack of imagination in attack was compounded by constant gifting of penalties to a home side which looked in complete control as the two teams went in at the break. Give the series to the Springboks now, you might’ve thought.

Yet despite the initial setbacks, the Lions somehow managed to pull off a remarkable victory in an absorbing first test in Cape Town, setting the scene for a potentially decisive clash next weekend as the Boks seek revenge for a game they feel they should have closed out with ease.

So how did the Lions manage to beat the South Africans on their own turf, and what can be learned from a game which could set the tone for the rest of this titanic series?

So much has been made in recent years of the way in which South Africa choose to employ their defensive line, and Saturday’s test, particularly in the first half, was the perfect exhibit of why the Boks have a reputation as the most formidable defence in world rugby.

The Boks’ employed their preventative blitz during the first half to great effect. Instead of drifting with the play from inside to out, the Springboks have a strong tendency to aggressively smother attacks, isolating players as soon as possible so that the ball never reaches the wider channels. When Lukhanyo Am smashed centre Daly as he dropped into the pocket early in the first half, it set the tone for how South Africa would employ their brutal defensive structure; hit hard, hit fast, hit early.

If the Lions stand any chance of repeating the miracle and bagging another win on foreign soil, they have got to find a way of figuring out how to disrupt the South African defensive line. Penalties might have lost the Boks the match as we’ll see later, but you can be sure Rassie Erasmus will not tolerate such ill-discipline come the sequel.

With such an aggressive defensive style and massive pack comes a physically gruelling match. The Boks, having hit players as hard and as early as possible, were able to position their forwards in relative proximity to the tackle zone, meaning they were always in with a shout of obtaining a turnover from a jackal or through applying pressure to a contact point at which they were setting the tone and dictating forward momentum.

To combat the risk of giving up possession, the visitors often employed a more closed attacking unit, keeping the ball infield to protect it before kicking tactically from a stable base.

Yet as the game wore on, South Africa’s blitz defence became increasingly fatigued, and even though the Lions struggled to find a way to the try line, they at least managed to retain possession through multiple phases of play in the second half. It’s telling that at half time, South Africa commanded a 12-3 lead, but shipped 19 points while only adding 5 before the final whistle. Commentators and pundits spoke of the two sides’ fitness levels as dictating the gradual swing of momentum towards the visitors; South Africa simply couldn’t maintain their ultra-aggressive playing style. Come next Saturday, expect the game to be won and lost in the final 20.

Like it or not, when it comes to high-level test rugby, what a team does from the boot is as important as what they do from the hand, and in this, the Lions put down a marker which the Boks must match when the two sides face off again on the 31st.

South Africa were by no means bad when it came to kicking penalties, Handre Pollard exhibiting a reasonably dependable display from the tee (although a second half miss will haunt him), but Biggar’s metronomic dependability in kicking the 3’s when it mattered justified his selection as a specialist 10. Simply put, the Lions took their chances from the tee when presented with penalties opportunities (can you really say Elliot Daly’s 55m penalty attempt was a clear cut chance?), and South Africa will rue the fact that so many of the points which the Lions scored were relinquished rather than truly won.

As for using the boot in open play, don’t expect too much deviation from the tense, cagey affair we saw last Saturday, an affair which prioritised use of tactical box kicking to create 50-50s in strong positions across the field and hopefully cause structural disruption among two very strong defensive units; both teams will play protective phase rugby before sending the ball to the Heavens and looking to pressurise the back line with hard-hitting defensive runners.

As evidenced above, the Lions simply could not have come back into the match without the ill-discipline of the hosts allowing Dan Biggar the chance to ruthlessly exploit from the tee their endless string of second half mistakes.

Cliches about ‘a game of two halves’ aside, South Africa decimated their own chances of victory through a period of unrelentingly self-sabotage early in the second half as they relinquished penalty after penalty after penalty, often for needless and avoidable infractions and under little visible threat from an attack which for most of the encounter had struggled to exert any real pressure.

Rassie Erasmus won’t need to labour a point that most of the Boks will have realised all too well; cut out the mistakes or else it’s tour over for the Springboks.

Brutal tests take their toll. In games such as these, the importance of a decent bench is augmented to an absolute necessity, an attribute which seemed to give the Lions the edge in the manner in which they deployed their subs.

While the South Africans threw on their replacement front rowers at the beginning of the second half, with Kitshoff and Marx replacing Nche and Mbonambi respectively on 40 minutes, Gatland held out for a further 15 minutes before introducing Mako Vunipola and Ken Owens, only to add the destructive force of Kyle Sinckler into the fray on minute 66, with Vunipola in particular causing problems for an ailing South African pack.

Coupled with Gatland’s further tactical introductions, mainly in the back line, it was a series of changes which handed momentum to the visitors while giving Erasmus plenty to ponder. Did he throw on his replacements too early? Did his side wane just as the Lions began to find their feet?

Big games demand big players, and big players define themselves as such through the gauntlet of big games. Itoje and Etzebeth ripping each other apart at the maul, de Klerk always in the face of the Lions back line, Hogg a consummate professional at the back, Courtney Lawes putting in a titanic display at 6 worthy of the finest Lions tourists of the past.

For all the eulogising over AWJ’s Terminator-like comeback and the immensity of Maro Itoje at the breakdown (and pretty much everywhere else), Lawes shone not only as a brilliant operator in his own right but as the unlikely star man of a test which a few months ago the Northampton lock wouldn’t have even dreamed of being involved in. My predictions that Lawes had more chance acting as a water boy than he did starting at 4 or 5 might have (just) been justified, but the Englishman’s unbelievable strength and physicality served him mightily in a game defined by grit and iron. His recall for the second test has surprised no-one.

As for the rest, they’ll need to step it up in a big way, because test matches are so often defined by whether or not Great players play to their potential as much as their reputation.

Itoje and Lawes likely came away from last Saturday’s game already thinking about how they would play the follow-up, such was the quality of each man’s performance, and both have justified their selection in Gatland’s side for the second test on the 31st. A few other tweaks made by the New Zealander may have raised a few eyebrows, but it is the decisions he has not made which have really turned heads.

Of particular concern following the first test was the role of Gatland’s centres, a position in which the New Zealander is not lacking in options, as evidenced by the tactical shift of dropping Daly for Chris Harris and moving Henshaw to the outside channel. Through little fault of his own, the Saracens man found his space shut down as he was caught in the focal point for South Africa’s devastating blitz, and Gatland’s may reason that employing a more defensively-minded midfielder is justified if this is to be the case.

The Lions back line, an area of not inconsiderable talent, has avoided a shake-up despite Gatland’s capacity to shuffle the deck, with Hogg’s excellence at fielding South Africa’s probing kicking game keeping Liam Williams out of contention. Anthony Watson was exceptional on the rare occasions he had ball in hand and thus remains, but it is Duhan van der Merwe who will likely be the most surprised at his continued inclusion, with form man Josh Adams omitted perhaps due to the probability of a high ball kicking game.

In the front row, the impressive Mako Vunipola starts in place of Rory Sutherland who drops to the bench, while Conor Murray takes Ali Price’s place at 9, again pointing to Gatland favouring a structured, even game over a frantic, fast-paced one.

Elsewhere, Hamish Watson is dropped from the side as Taulupe Faletau comes in as the back up number 8. 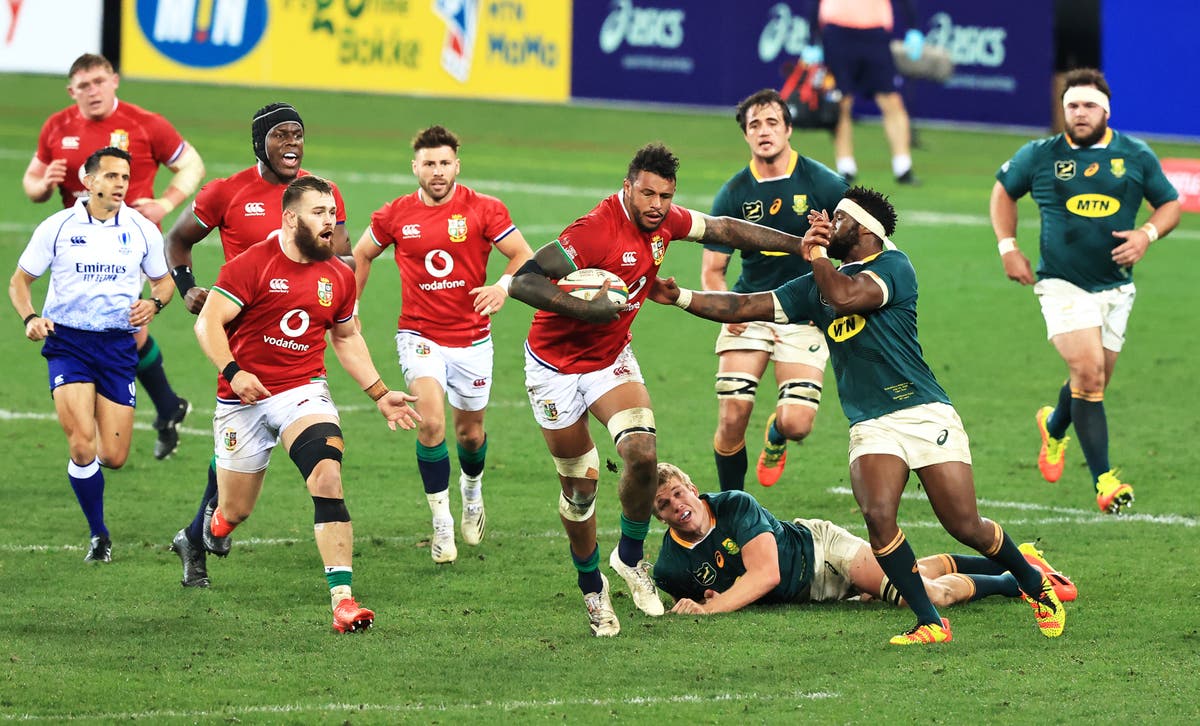