There are bad starts to a season. There are teams that perform below expectations. And then there are Bath.

For a team with such supreme strength-in-depth, such enviable star quality, such a wealth of players capable of performing at the highest level of both club and international rugby, it seems almost unfathomable that the Somerset side are faring so poorly. To many, Bath have always been perennial underachievers, never quite hitting their straps when required and failing to hark back to the club’s golden era of the 80s and 90s.

Yet the start to this season’s campaign has been strikingly atrocious. Bottom of the table, haemorrhaging tries and throwing away results, Bath have been frustrating at times and woeful at others, the nadir coming via a 71-17 defeat to a devastatingly resurgent Saracens side earlier this month. A 31-17 defeat to Harlequins confirmed it as Bath’s worst-ever start to a Premiership season. With Anthony Watson, Cam Redpath and now Beno Obano adding to an ever-growing list of injuries and the prospect of losing further stalwarts to international duty, it’s truly hard to conceive of things getting any worse for the west-country side.

So how did it get this bad, and what can a team featuring the star quality of Jonathan Joseph, Sam Underhill, Charlie Ewels and Danny Cipriani do to repair the dismal start to this season’s campaign?

It hardly takes a genius to work this one out. You can see Bath’s defensive shortcomings from space. Ship ten tries in a single game against any side and the alarm bells should be ringing so hard that they’ve toppled out of the belfry. Bath’s defence seems to be in decline, having shipped the second-highest number of points last season and currently matching that ignominy this season, but the defensive display against Saracens on the 17th of October was beyond inexcusable. It was just unbelievably awful.

What really stood out was how soft most of Saracens’ tries were, coupled with the variety of ways they were able to score them. Itoje’s early score, which merely involved the lock drifting around a huddle of static defenders, set the tone for the game, but Saracens beat Bath in every department, from Farrell’s devastating hand-off of Danny Cipriani to Ben Earl’s laughably simple run-in following a possible Alex Goode knock-on. Worst of all, Rotimi Segun was allowed to finish in the corner from a mere two passes from a dead ball play. Saracens might have been good, but Bath might as well have been a set of training cones.

It’s a theme that reoccurs when assessing many of the beleaguered side’s performances this season. Against Bristol, Steve Luatua’s simple dummy on Semesa Rokoduguni allowed him to cut back inside for a simple run-in, the Bath stalwart following the ball rather than the man for an easy score. Against an admittedly excellent Quins side, Bath’s defence failed to realign following a breakdown which left them completely exposed at the short side, gifting Danny Care a simple two-on-one which isolated Joe Simpson to put Esterhuizen away.

Bath’s defensive woes aren’t consigned to individual errors or isolated incidents. Time and again, against Saracens in particular, the entire side has been guilty of conceding momentum at the gain line. While it’s easier said than done, stopping momentum at source and smothering attacks with physicality is vital to prevent teams from punching holes and building a platform of attack. Bath don’t lack for physicality, but a potential dearth in confidence is causing them to look scattered and beleaguered in defence rather than dominant and assured. Head coach Neal Hatley will shoulder the burden of making sure these deficiencies are set right.

Attacking Talent, But a Lack of End Product?

Bath have a backline that should be the envy of their Premiership rivals, a roster packed with established international operators and up-and-coming starlets. Yet often this season, Bath have failed to truly cash in on their assets, frequently breaking lines but failing to truly capitalise and strike a deadly blow. This was something that happened twice against Harlequins, evidenced when Ruaridh McConnochie cut through the Quins defensive line before relinquishing the ball to a turnover due to a complete lack of support at the breakdown. These things are hard to legislate for from an attacking perspective, but they do signal a disconnect between the rampaging backs and their forwards’ ability to cover ground in support.

A team with this kind of attacking pedigree shouldn’t be performing this poorly. Bath have grappled with injuries, admittedly, and Watson will be a particular miss after rupturing his ACL, but so much of their talent is stacked towards their backline that Bath have no excuse for not at least flourishing creatively. Joseph, Muir, Cipriani, as well as the upcoming Ojomoh and Bailey, should be paying dividends. Once the likes of Watson and Redpath return, Bath will struggle for excuses if they fail to get the ball over the line.

Inevitably, questions have been posed regarding a few of the veterans in this Bath side. Cipriani has been the big name move but so far has failed to find form, while questions have been asked of Semesa Rokoduguni’s future. He’s been an awesome stalwart for so long, but is the winger finally starting to feel his age? At 34, it only gets tougher to retain that spark.

Lack of Confidence and Too Many Mistakes

Unsurprisingly, Bath’s current woes have led to a dearth of confidence which, in a cruelly vicious circle, has only compounded the misery of their on-field performances. While there have been flashes of brilliance from those who produce their best rugby when operating on instinct, some players seem to be overthinking, or else not thinking at all. When Bath faced Saracens, for instance, the normally magical Cipriani floated a wayward pass under only a little pressure to allow Max Malins a simple intercept from his own half.

Conversely, when Max Clark cleverly picked up the ball immediately from a breakdown to create a two-on-one, he failed to do the basics in drawing his man to release Oliver Fox for a free run of the line. Despite the simplicity of the task, Clark seemed to panic, not picking his line properly and not running with enough intent before dialling in an early pass which Quins fullback Tyrone Green read to shuffle across and nullify the threat. A more confident player in a happier side would’ve seen Bath take seven points.

Such a dip in confidence has only compounded errors in in-game management. Against Sale, Bath threw the game away at the death, while at Bristol they found themselves conceding a late penalty try and defending a lead with two players in the bin. Bristol went on to win despite having been 8-15 down at half-time. Breaking this cycle will come from getting results, but it will also stem from having a few level heads in the side who can steer Bath to victory during the crucial phases of a game.

It certainly isn’t all doom and gloom. Perplexing as their underperformances are, Bath have the players in place, they just need to figure out how to get those players performing once again, because in full flow the Somerset side are a brilliant attacking prospect, and they’ve shown flashes this season already. Given how many injuries the side have suffered and how many key players are sidelined, they can at least hope for an upturn in results once the physios have worked their magic.

Despite these fitness concerns, they’ve scored wonderful tries against Quins and Sale, and Will Muir’s unbelievable score in combination with Max Ojomoh following an exceptional kick from Orlando Bailey proved that not only do Bath have the capacity for incredible attacking prowess, their youth prospects are capable of playing with the big boys.

Ojomoh looks set to become a star, while Bailey, often this season’s starting ten ahead of Danny Cipriani, has shown a genuine desire to step up to the plate when asked. It hasn’t always come off for him, but the young ten has the quality a team needs most in a fly-half: stone-cold resilience.

And let’s not forget that, despite the Saracens demolition of the Rec, not all games have been anywhere near so one-sided. Bath have faced off against many of the league’s big hitters already this season, Northampton, Exeter and a resurgent Leicester notwithstanding, and will take heart from the fact that so many results could have gone in their favour. The men in blue and white now face off against Wasps, Leicester and then Exeter in the Premiership to round off a pretty unforgiving set of opening fixtures, but if they can get a result somewhere, it will be worth its weight in gold. Fail to do so, and director of rugby Stuart Hooper will have some very tricky questions to answer. 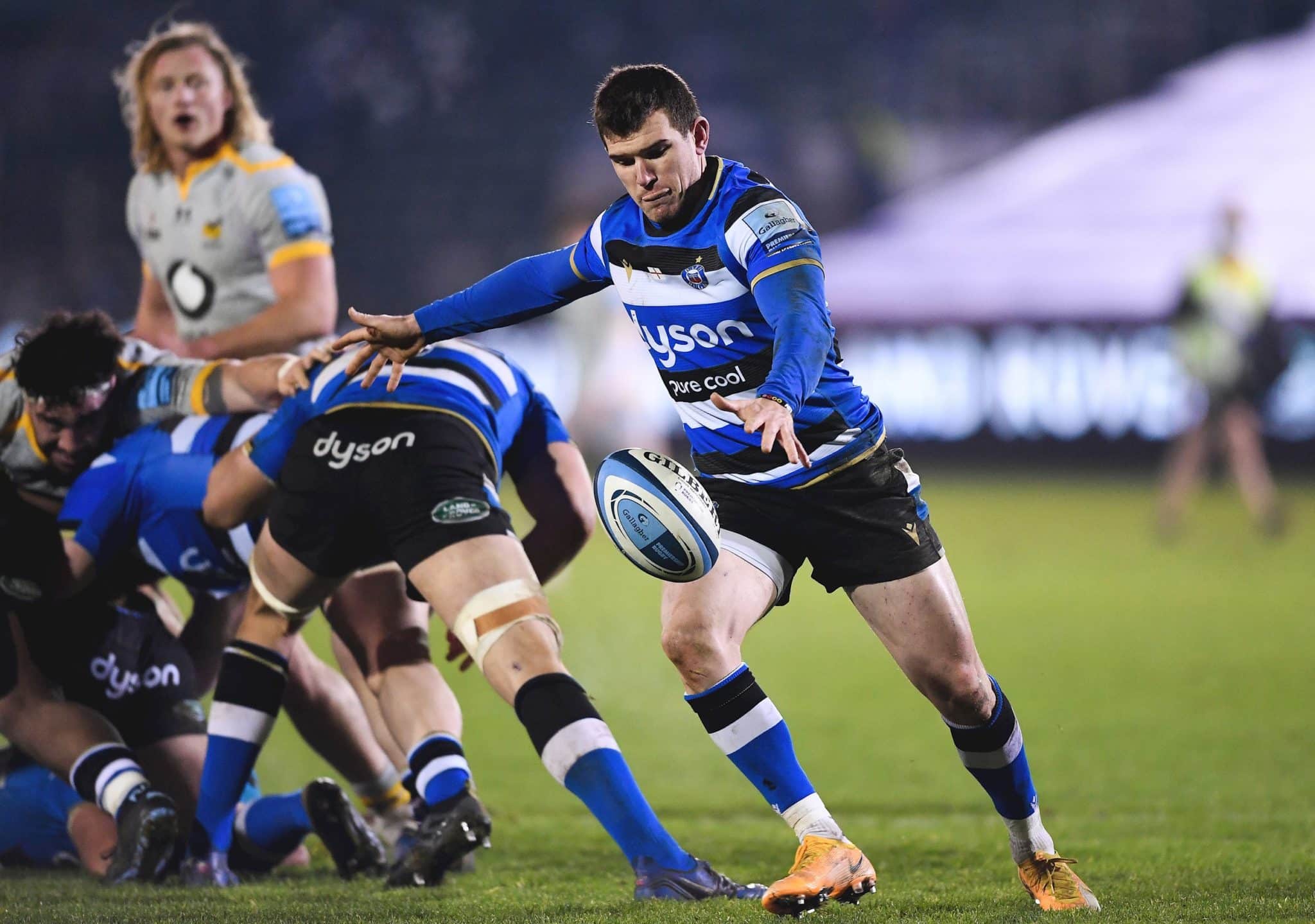