The May 24th, 2021 episode of Monday Night Raw featured some jaw-dropping action and pointed us in the direction the WWE is heading on their road to the Hell in a Cell pay-per-view. Here we will dig into what was actually good on Monday Night.

This was a number one contender match, the winner getting a WWE title match against Bobby Lashley at Hell in a Cell pay-per-view. As a side note, the Champ Lashley and MVP were sitting at the top of the stage in the MVP lounge watching over the match.

A highlight of the match occurred when Kofi jumped off the top rope looking for a crossbody but Drew held on to Kofi and rolled through carrying and lifting up Kofi. Then laying him out with a devastating Michinoku driver for the near fall. This appeared to worry the Almighty WWE champion Bobby Lashley who alongside MVP moved closer to the ring to get a better look at the action.

Kofi’s perseverance was strong as he weathered McIntyre’s storm and connected with a frog splash from the top rope onto a crouching Drew’s back. This caused Drew to spill outside the ring and get distracted by Lashley.

As this happened Kofi leapt off the top rope and connected with his diving trust fall taking out Drew and Lashley. Kofi then pulls Drew back into the ring and hits an SOS for a two count. But before we can find a finish Bobby and MVP storm the ring and attack both Drew and Kofi.

Kofi and Drew then work together to drop Lashley, as Kofi hits trouble in paradise, which is followed by a claymore from Drew. Later on, Adam Pearce booked a rematch between the two next week and if Lashley or MVP get involved they will get suspended.

Listen, I know we had a triple threat at Wrestlemania Backlash, but I’m hoping for another at Hell in a Cell. Having Kofi’s high flying ability and innovative offense with the two powerhouse juggernauts will prove to be a mouth-watering bout, especially if this possible encounter does happen inside the Hell in Cell structure to stop any outside interference.

I know, I know, again. In what feels like my existence has been watching these two go at it, I like many sighed at the sight of Flair and Asuka having another match. But then again, it is Charlotte Flair and Asuka, two of the best technical wrestlers today. So, we shouldn’t be surprised when they put on a classic.

The big turning point in this match happened when Asuka tried to go for a running hip attack and Charlotte caught Asuka mid-air with a nasty chop block to the left knee. The rest of the match was an all-out assault on the injured knee of Asuka.

Highlights of the match came through Charlotte’s homages to her recently released from the company, fiancé Andrade. With Flair landing the big boot fake into a spinning back elbow and the double moonsault signature offense from EL Idolo’s move set.

The finish of this match came when Asuka locked in the Asuka lock, but Flair rolled over for the one, two three.

It was later announced that Charlotte will get a one-on-one match with Rhea Ripley for the Raw women’s title at Hell in a Cell. On the basis of the match, this was great. Storyline-wise, the 50/50 booking, and repeated matches are meh to bad. But if you ask me if I rather see Charlotte vs. Asuka or Charlotte vs. Dana Brooke, I’m going to beg you for these repeated matches.

When I first saw Riddle vs. Woods on the match card, I thought cool haven’t seen this before, Riddle’s a great worker and Woods can hold his own. Damn, was I wrong, this match was INSANE.

Both men started off the match showcasing their grappling ability and groundwork, with some excellent mat wrestling.

Then we got into the portion of the match where these two men said let’s get creative. As they pulled off some seriously astounding offense. Of note, Riddle tried to monkey flip Woods into an armbar. Woods then escaped and had Riddle held down to the mat, in an incredible display of strength, Woods then lifted Riddle up by his wrists into a vertical suplex.

Another mad moment of this thrilling encounter was when Riddle caught Woods on the apron. Riddle would then jump onto the middle rope to lift Woods back into the ring with a catastrophic german suplex, looking like Woods landed hard on the back of his head. Yet somehow Woods kicked out of the pinfall.

The two then engaged in some back and forth blows until Riddle hit an RKO out of nowhere for the win. A page from the playbook of his tag team partner Randy Orton.

For the best part of a month RK-Bro has been the best thing on Raw, and even with Orton not present the story was still head and shoulders above anything else on the show. Riddle fought against his friend Xavier for Orton, to prove his loyalty to the viper, and the RKO to end the bout was the icing on the cake.

A round of applauds to both men, especially Xavier Woods, who once again proved he is criminally underrated in the ring. In my opinion, this was the TV match of the year. Bravo, gentlemen bravo. 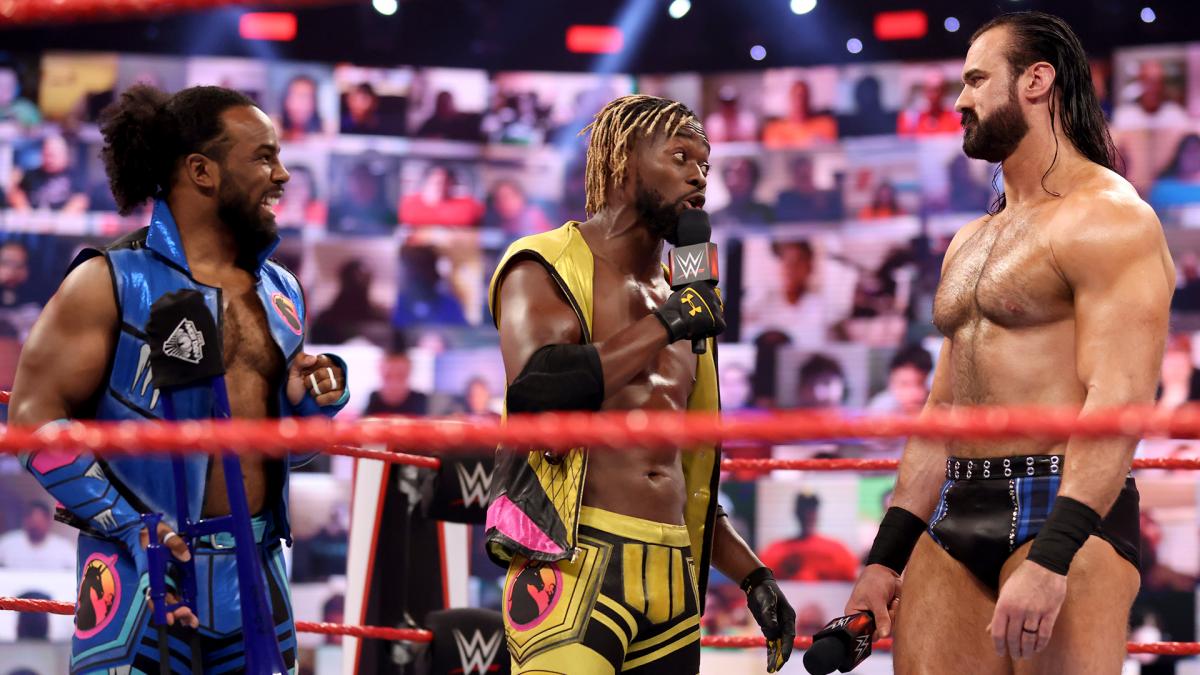