“We should trade Romo for a defensive player.”
“Romo had years to take us to the Super Bowl and he didn’t.”
“He better not play, because if he goes down again, he could be seriously hurt.”
“If you want Romo in the starting lineup, you are either an idiot, or liked it when we were losing.”
I’m sure you get the idea.
These are just a few of the many things I’ve seen and heard regarding our franchise quarterback, Tony Romo.
My question is, why?
At this time just last season, we were counting down the weeks until Romo’s return. The Cowboys were able to win just one game when he was absent all four quarters. So all because of the ability of a very talented rookie, we’ve gone from “Romo is our savior” to “Romo needs to retire?”
If you couldn’t tell, I’m still very lost.
Yes, Dak Prescott has been far beyond impressive, and better than anyone could have foreseen. He’s got the poise of a seasoned veteran in this league, and has led this team to five-straight victories. So to anyone reading this, please don’t take this to be any kind of knock on Dak. This controversy surrounding the quarterback position is a great problem to have. We now have our backup and future quarterback problems solved, no matter who is under center.
The thing is, Romo hasn’t taken a single snap this regular season, yet he’s being told to retire, blamed for our down years, and has fans wanting him to be traded.
What in the world has he done to deserve this type of scrutiny?
He’s done absolutely nothing, to be exact. And don’t tell me it’s because he’s hurt. Number one, that’s not even remotely his fault, and number two, he’s had a career filled with setbacks, ailments, and injuries. Yet, all of a sudden, one more injury will end his career? To be quite frank,
I’m not buying it.
I also don’t buy into the narrative that our down seasons have been Romo’s fault. In fact, Romo has been the one who has taken the worst defense in franchise history, a bad offensive line, suspect coaching at times, receivers who have no clue what they’re doing, and turned those teams into competitors for the division. While doing all of this, he has broken virtually almost every franchise quarterback record there is to break. The Cowboys are lucky they had Romo all those 8-8 seasons, because if they didn’t, they wouldn’t have even come close to 8-8, much less be a winning team. If you think for one second that Romo has been the problem, you should probably go get your eyes checked out.
The fact that some fans seemed to treat his broken collarbone last year just like any other injury he’s had, as long as it meant him coming back and saving the team from a losing record, are now the ones saying he needs to retire during a successful few games, claiming it is because of his health, is actually quite concerning. To me, it sends the message that they don’t really care about his health. If they did, that opinion would’ve been expressed a long time ago. This type of rhetoric is quite frankly very disrespectful whenever it’s hurled at a man who has literally carried his entire team on his back, while undergoing massive amounts of scrutiny, blame, adversity, and of course injury, while playing at an elite level; all for the love of the game of football and his team. When Romo retires, whether it’s this year or five years from now, it will be when he wants to. It won’t be because of the fact that there is another talented quarterback on the roster, or because the “fans” want him to. It will be because he wants to. When and why he retires is up to him and his family, not anyone else.
I thought for sure that after the disaster last season was, people would finally realize how lucky we are to have Tony once-and-for-all.
Boy was I wrong.
It seems as though any time something good or bad happens for this team, the narrative on Romo changes drastically. The selective memory kicks in, and people forget all that he has done for this team. Instead of going back and forth like that, shouldn’t we just accept the fact that he was, and is still an amazing quarterback? We are still extremely lucky to have him, and a great young quarterback doesn’t change that. Tony Romo has been the shining example of what a leader should be. He has come back stronger from countless setbacks, and I don’t think this one is any exception. The people turning on him now should probably watch out, because he’s pretty famous for proving people wrong. He’s had to do it his whole career, and it wouldn’t surprise me in the slightest if he does it again, sooner than what you might think. If he does, it will be one of the highest points in my life as a fan. I will be able to look back and say:
Tony Romo celebrates after throwing the game-winning touchdown pass in the wild card round of the 2014 playoffs.Great job Tony, you got the last word.
ALSO READ:  The Fall of NFL QB Josh Rosen 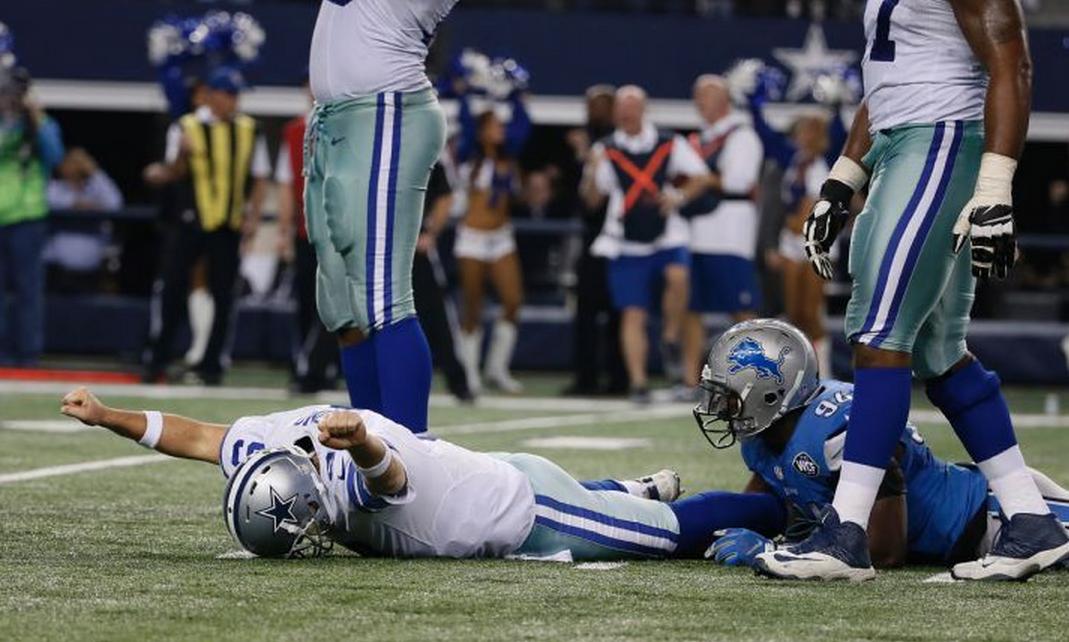