Martin Truex Jr. dominated Sunday at Dover International Speedway,Truex held off Kyle Busch for the win, with Chase Elliott, Brad Keselowski, and Matt Kenseth rounding out the top five.The rain-delayed Xfinity race ran earlier in the morning, providing an unexpected luxury, ending up with a rubbered-in track that allowed drivers to run high lanes right from the start.  Keselowski held the early lead, but Truex and Busch soon claimed their  opportunity at the front. The leaders caught the back of the pack just 16 laps into the race, and by the end of the long green flag runs that concluded the race, only six cars were on the lead lap

This year, Truex has led a whooping 19.1 percent of all laps in Sprint Cup. The single-car team for sponsor Furniture Row is sneaking up on nobody now.His victory at Dover was his third in five races. He won two of the three races in the first round of the Chase elimination Series.

Tony Stewart finished 13th and was knocked out of contention in the first elimination race of the Chase for the Sprint Cup championship.Johnson had problems on his Lap 279 pit stop. Johnson’s jack man stepped over the pit wall early enough to make a phone call before Johnson’s No. 48 Chevrolet arrived, and the resulting penalty cost the six-time champion a lap he never recovered

Chris Buescher and Chip Ganassi teammates Kyle Larson and Jamie McMurray also dropped out of the Chase. The field was sliced from 16 drivers to 12. Austin Dillon finished eighth and moved from outside the Chase to a transfer spot and has moved on to the next round.

Kevin Harvick, Kyle Busch, Brad Keselowski, Matt Kenseth, Joey Logano, Chase Elliott, Jimmie Johnson, Denny Hamlin, Carl Edwards and Kurt Busch joined Truex and Dillon in the next round that opens at Charlotte Motor Speedway.It’s a fresh start for the remaining Chase drivers, with only three races before the field is cut again. The points have been reset, so the 12 drivers all start even stevens. 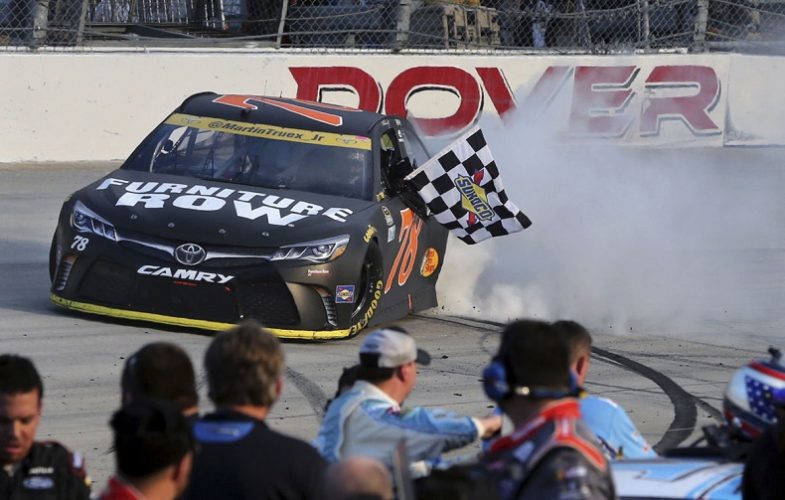