Red Bull finally announced Sergio Perez as their driver for the 2021 season this week. A move that brought smiles to the faces of many as the Mexican got his well-deserved shot in a race-winning car. Also, with that announcement, the 2021 grid finally took shape with all the driver lineups now confirmed by the teams.

All bar one, in fact, as we scanned through the lineups to find that Mercedes was yet to confirm Lewis Hamilton for the next season. A move that almost always seemed like a formality whenever it was brought up has started to catch the eye of many as the year comes to a close and the contract extension is still not finalized.

As the pundits sit down to speculate over why that could be the case there seems to be a multitude of reasons around why Lewis Hamilton is yet to officially extend his contract with Mercedes.

With the economic world taking a severe hit during the pandemic it’s no surprise that Mercedes to has taken a hit financially. Right now, Lewis Hamilton, is the highest-paid driver on the grid by some distance and Mercedes has been more than willing to shell out the big bucks to keep the World Champion in the team.

But with a budget cap right on the horizon and the Driver Salaries considered to be part of the budget, it would become difficult for Mercedes to spend the big bucks on the driver when those resources could be used to make the car faster.

Also, George Russell’s one-off attempt at Bahrain in the Mercedes where he almost won the race could have shown Mercedes that maybe they don’t need to shell out that much money on the driver if that money could be used to make the car faster. Lewis, as arguably the most successful driver in the history of Formula One would command a certain price for his services and the sticking point could ultimately be the number of zeroes in Lewis’ contract.

Lewis Hamilton will be 36 next year and he has pretty much dominated the sport throughout the past decade. It’s hard to fault anyone that considers him the best driver on the grid right now. How long does he want to do this when he already has all the records in the books? Will he be looking for a short-term contract to keep his options open for the future?

Will he be keeping an eye on the young talent that is slowly but surely coming into its own? Will he be even motivated to fight the likes of George Russell, Max Verstappen, and Charles Leclerc who are much younger and hungrier at this stage of their career. Mercedes on their part would be looking at a long term deal with Lewis to keep the best driver on the grid in their cockpit.

At the same time, Lewis might not be willing to commit long term as after conquering everything at the Pinnacle of the sport it’s tough to get yourself psyched about the next challenge that might be presented to you.

The Change of Regulations

2020 could be the beginning of a brand new era in the history of F1. With a focus on stacking the grid closer to each other and the introduction of budget cuts, we could see a change in the approach to racing than we’ve seen before. The current specification of Formula One is arguably heavily dependent on the car underneath the driver(that’s why Valterri Bottas finishes ahead of Max Verstappen in the standings). The plan is to create an ecosystem where the driver could be the distinguishing factor.

Also what it means is that the advantage that Mercedes enjoys on the field in the current set of regulations could extinguish completely. An occurrence that could end the Silver Arrows’ dominance over the entire field. Would Hamilton want to stick around for the new regulations? Would he be willing to push yet again in a car that might not be as competitive as its predecessors?

For sure a driver of Lewis’ Calibre loves a challenge but at the age of 38 and after achieving everything that could be achieved in F1, will Lewis have the motivation to do it all over again? These are the questions for which we just don’t have the answer but they do shed a light on why Mercedes and Lewis have not announced an extension of the contract yet.

Toto Wolff recently announced a 3-year extension with Mercedes and in many ways, this could be the catalyst to Lewis extending his contract as well but one thing is for sure, there’s no smoke without fire and Lewis taking this long to sign a contract with Mercedes surely raises questions about possible doubts in both the camps about the future. Either way, interesting times ahead for F1 as the Best Driver on the grid and the Best Team are yet to come to terms about a future agreement. 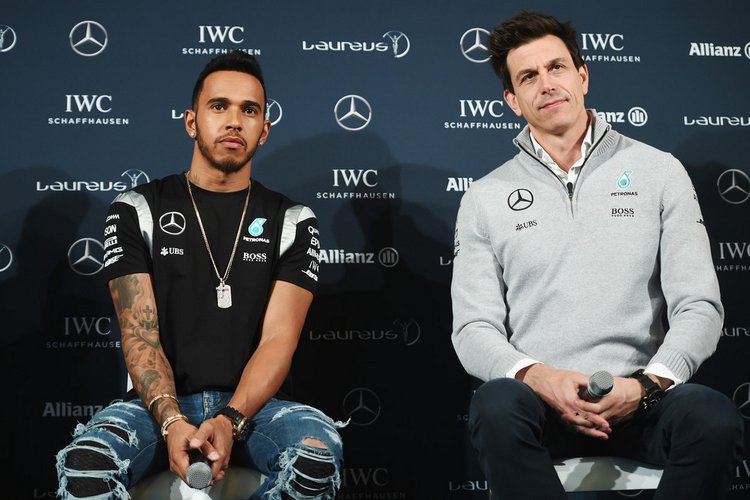