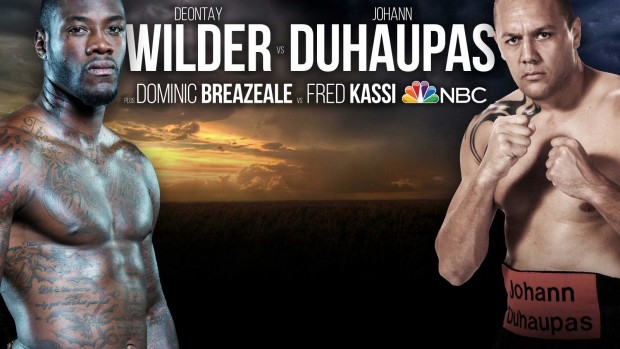 Wilder, 29, has recently been criticised by the WBA Super, WBO and IBF Heavyweight champion; Wladimir Klitschko for not defending his title against a higher level of opposition.

In his last fight, Wilder dropped his opponent, Eric Molina three times on route to a ninth round knockout victory. Wilder’s technique was crude providing ample opportunity for Molina to land his own punches before the champion forced the stoppage.

Molina may not be a world class fighter but with the exception of Stiverne, he extended the champion further than any previous opponent, therefore the remarks from Klitschko seem unwarranted. Being a pragmatic fighter, Klitschko’s words are probably intended to goad, “The Bronze Bomber,” into negotiations for a unification bout.

It is hoped that this very public ridicule by his rival, will provide the required motivation for Wilder in his voluntary defence against the Frenchman Duhaupas.

Duhaupas, 34 is ranked #11 by the WBC, and should be regarded as a tougher opponent that Molina. In his last fight he won a ten round majority decision over former title challenger Manuel Charr which surprised many fans. He previously held the French and European heavyweight titles and he lost a twelve round decision to current European champion Erkan Teper for the IBF Inter-Continental title in March this year.

In terms of ability, Duhaupas can move around the ring with a certain degree of authority, but he is by no means quick. He tends to throw swinging combinations however he does possess an impressive jab. Duhaupas has never been stopped before but he has also never faced an opponent with such lethal punching power as Wilder.

The Molina fight highlighted that perhaps Wilder over relies on his power in fights. He perhaps expected to take Molina out of the fight much earlier than he did. Complacency appeared to creep in during the Molina fight and he will have to ensure he maintains composure and tightens up his defence in this one.

Wilder needs an impressive performance to silence his critics and he will likely achieve it a stoppage of Duhaupas.

After Saturday night, Wilder will be in the precarious position of having to face his mandatory challenger, former WBA Heavyweight champion Alexander Povetkin. The Russian is seen as a legitimate threat to Wilder, having seen off a host of heavyweights including; Ruslan Chagaev, Hasim Rahman, Marco Huck and Carlos Takam. His sole loss came in a title challenge against Wladimir Klitschko in 2013. Wilder may soon find that it is easy getting to the top, but the hard part is staying there.

Finally, on the undercard former U.S. Olympian and undefeated heavyweight prospect, Dominic Breazeale (15-0, 14 KOs) will take on Fred Kassi (18-3-1, 10 KOs) in a ten rounder. Breazeale lost out in the first round of the London 2012 Olympics in the Super-Heavyweight division. Since turning pro Breazeale, who stands at 6’7, has developed into a popular heavyweight prospect and this will be another opportunity to showcase his punching power.

I'm like George Clooney, only without the face, physique or the charm. I am passionate about writing...
0