In two groups full of last-minute drama, Australia shocked the world by qualifying for the next phase of the tournament while Poland go through in the final minute on goal difference.

Argentina came into the World Cup with heavy expectations to seriously challenge for the trophy after their 1-0 victory over Brazil in the 2021 Copa America final.

However, the defeat to Saudi Arabia in their opening fixture of the tournament dampened the high expectations that were placed on this Argentina side, failing to beat the Saudi Arabian side after a 1-0 lead at halftime.

Argentina also did not showcase their best performance against Mexico in their next game but did finish the contest collecting three points due to the brilliance of Lionel Messi and Enzo Fernandez.

The final game against Poland is where Argentina showed real class, dominating the Polish and winning 2-0 to book their ticket into the next phase of the competition.

Argentina will face off against Australia in the round of 16, in a game that they will be considerable favourites to progress through. Lionel Messi will be pivotal as always for Argentina, as his incisive passing abilities will be crucial to open up a tight and compact Australian resistance.

Being margins away from an exit from the competition in the final game of the group, Poland managed to scrape through thanks to a late Saudi Arabian goal, in their game against Mexico.

The Polish started off the group against Mexico, in a game that had little to shout about, with neither team deserving to take home the three points, despite Robert Lewandowski’s inability to convert from a spot kick.

Poland was not a convincing outlet against Saudi Arabia either, but this time Robert Lewandowski did step up for his side, scoring and assisting to help his side pick up a priceless three points, ultimately qualifying his nation for the next round.

But the final game of the group is where the drama kicked off, as Poland saw themselves only needing to concede one goal, or see Mexico score one more against Saudi Arabia to have had them packing their bags home.

The relieved Polish players and fans celebrated as the ball hit the Mexican net, sending them into their next fixture against France, where yet again they will face another of the tournament’s favourites. A game that Robert Lewandowski’s clinical nature will be imperative in securing a result in favour of the Polish.

Heartbreak in North America sinks in as Mexico exit the World Cup on goal difference.

The Mexicans started out the group in poor goalscoring form, being held to a scoreless draw against Poland where both sides looked toothless in front of goal.

Worrying signs continued to prevail as Mexico failed to score against Argentina, as they were beaten 2-0 in a tight clash between two sides that failed to create many chances.

The Mexicans finally found their goalscoring touch as they dispatched a quickfire double in the space of five minutes against the Saudi Arabians. With 38 minutes to spare, Mexico needed one more goal to put Poland out of the competition, however, in the 95th minute, Salem Al-Dawsari put the final nail in the coffin to seal Mexico’s fate, sending them crashing out of the World Cup finals.

Saudi Arabia provided us with one of the biggest shocks in World Cup history, as their side earnt their country a national holiday by beating Argentina. A side that have not lost in three years before this tournament and was one of the biggest favourites heading into this World Cup.

Losing 1-0 at half-time from a controversial Lionel Messi penalty, saw many people expecting Argentina to wipe the floor with their opponents. However, Saudi Arabia had other ideas, as they sparked a second-half performance that shocked the Argentinians and turned the game around to beat them 2-1.

Heading into the Poland game full of optimism, Saudi Arabia once again put on an impressive display as they undeservedly lost against a Polish side that was lucky to beat them.

The Saudi Arabians however could not pick themselves up for the game against Mexico, as they were largely outperformed in the contest and were defeated 2-1. But although they finished at the bottom of Group C, Saudi Arabia still had a significant impact on their group, shocking the world by beating Argentina and sending Mexico home through their last-minute goal.

Despite their loss against Tunisia in their final game and the flurry of injuries they received before the tournament, France look as strong as anyone in this World Cup, proving they have the capabilities to accomplish a historic back-to-back World Cup win.

Their group journey started out against Australia, as the French were shocked with a quick start by the Socceroos, as they trailed to Craig Goodwin’s strike in the ninth minute. However, it did not take the French long to get up and running and they rampantly scored four, with their attacking frontline looking formidable.

Kylian Mbappe took matters into his own hands in their next match against Denmark, as the 23-year-old superstar looked at his best in this match. The Frenchman’s frightening pace and electrifying dribbling skills discombobulated the Danish defence, scoring two and claiming man of the match.

The final group game against Tunisia did not go to plan for France, as they lost to Tunisia 1-0, but with a side that did not even barely resemble their first eleven, there will be no panicking for Didier Deschamps’s men.

Next up on France’s radar is a Poland side that is yet to put in a dominant display this tournament, a side that Kylian Mbappe and his fellow compatriots will be licking their lips in anticipation for.

Against all odds, the Australians have qualified for the round of 16, in a group almost identical to the one they finished bottom of in the 2018 World Cup.

The first game was fretting for the Australians as they were demolished 4-1 by a France side that showcased the gulf in class between the two sides, even after Australia took an early lead.

But this did not dim Australia’s hopes, as they beat Tunisia 1-0 in their second game, with goalkeeper Matt Ryan turning on a quality performance, providing Australia with a lifeline to qualify for the next round.

Expected to be beaten by the Danes, Australia defied the bookmakers and displayed a resolute defensive performance, not allowing Denmark to create chances with ease. Their efforts were further rewarded in the 60th minute, as Matthew Leckie delivered a strike into the bottom corner sending the Australians into elation.

Next up for Australia on their World Cup journey is the mighty Argentina, where they will take motivation from Saudi Arabia’s victory over the South American juggernaut, despite being considerable underdogs.

It has been a relatively confusing tournament for the North African side, as we struggle to grasp how they did not qualify in a group where they suffered no defeats at the hands of France or Denmark.

Denmark was expected to put Tunisia to the sword in their opening game, being a favourite to qualify through the group, however, Tunisia gave them no room to breathe in this fixture. Tunisia’s pressing and the Dane’s lack of cutting edge in attacking areas led them to a goalless draw, where they possibly could have had more if not for Kasper Schmeichel’s key save.

A game against the lowest-ranked nation in the group gave the Tunisians an opportunity to acquire three vital points to help them in their quest for qualification. However, Australia would not be denied and was able to resist Tunisia’s best efforts to get back into the game after Mitchell Duke’s glancing header in the first half.

Coming into the game against France, many believed that Tunisia’s chances of qualifying had evaporated. But Tunisia capitalised on France starting a weakened side, conquering the French in a 1-0 victory and if not for Australia’s shock victory over Denmark, Tunisia would have taken Australia’s spot in the next round.

It has been a disaster of a World Cup for Denmark as many tipped them as a strong ‘dark horse’ for this tournament, due to their performances in the 2018 World Cup, 2020 Euro’s and UEFA Nations League.

The Danes obtained their only point of the tournament against Tunisia in their first game, as Tunisia shocked them by coming out of the blocks early pressing and forcing Denmark into a game they did not expect. Goalkeeper Kasper Schmeichel played his part in the game through a superb one-on-one save, denying the Tunisians of the lead and leaving this game in the balance of a 0-0 draw.

With the first game seen as a blip in form, Denmark was still not written off against the reigning champions, after they beat France 2-0 in the UEFA Nations League in their last game before the tournament. However, this time they suffered a 2-1 defeat leaving their position in the group even more precarious.

Even despite having just one point heading into the fixture against Australia, many still expected Denmark to qualify past the Australians. But once again the Danish looked out of ideas in the final third and were picked off on a counterattack by Australia, who struck the final blow on a tournament to forget for Denmark. 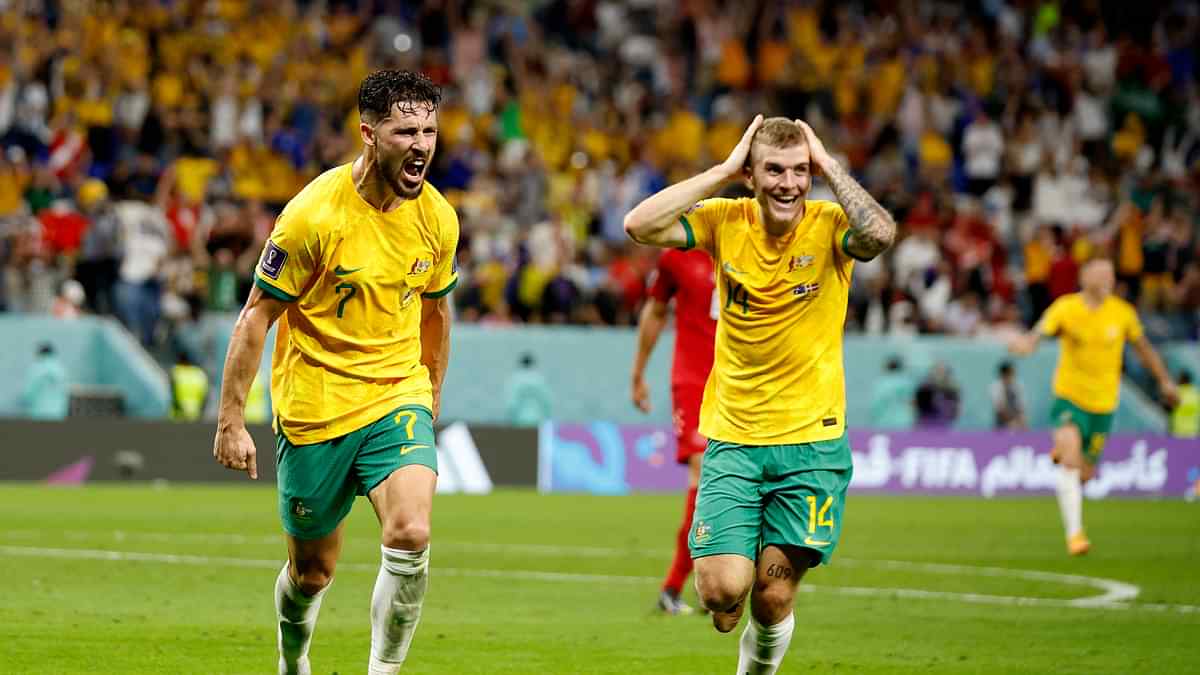