World no. 1 Ashleigh Barty gave herself the perfect birthday present by beating Belarusian Aryna Sabalenka in 3 sets to win the WTA 500 Stuttgart Open. She then teamed up with American Jennifer Brady to win the doubles title as well.

The Australian top seed, who turned 25 on Saturday, was a set down in the singles final to the 22-year-old fifth seed, but stormed back to take the title 3-6, 6-0, 6-3. It was the third match in a row that Barty had fought back from a set down to win.

It was Barty’s 11th career title and her third of the year, and puts her at the top of the Race to Shenzhen end of year WTA tour finals leaderboard.

The final was a match up of pleasingly contrasting styles with the big grunting, big serving, power hitting of Sabalenka up against the clever, creative, erudite precision of Barty. Their head to head record was equal with 3 wins each, although it was Barty who had won their last meeting at the Miami Masters quarter-finals, in three sets. This would be their first meeting on clay.

Both players had chances to go ahead in the opening set. Sabalenka saved a break point in the opening game and then two more in her third service game, with some service bombs, one of them an ace, measured at 181 kph. 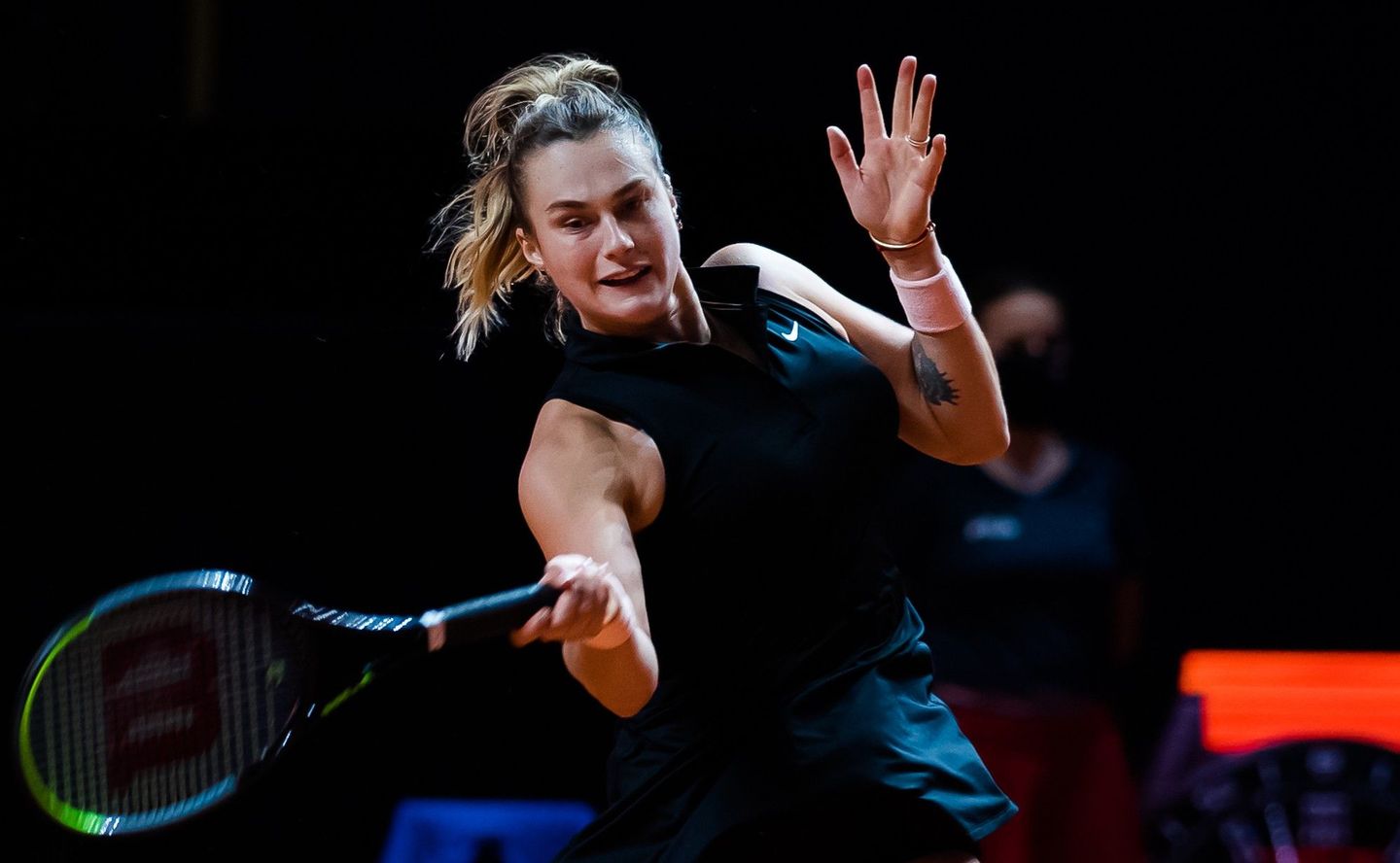 She then revved up her groundstrokes to create three break point opportunities of her own on Barty’s serve in the sixth game, hitting with easy power on both wings. Barty, though, is a very capable server herself, and some smart, precise serving – taking pace off the ball and adding kick – and including an ace, rescued her.

Sabalenka’s fearsome groundstrokes were relentless, and Barty was in trouble again in her next service game. This time, Sabalenka got the break at the second attempt, as a Barty drop shot fell into the net, to go up 5-3 and serve for the set.

Sabalenka double faulted on her first set point, but succeeded the second time with a heavy 163 kph serve that Barty could only net, to give her the set 6-3, in 38 minutes.

The loss appeared to galvanise Barty who again earned break points in Sabalenka’s first service game in the second set. Once more, some big serving and hitting bailed Sabalenka out, but an unforced error on the backhand gave Barty another chance. It was third time lucky for her, as this time, Sabalenka’s forehand let her down, giving Barty the break to lead 2-0.

The loss seemed to deflate Sabalenka, whose performance level decreased dramatically as Ash Barty’s improved. A plethora of groundstroke mistakes started to seep into Sabalenka’s game as big winners turned into big errors. Barty took full advantage, breaking her three times in total, in each of her service games, to charge through the set 6-0 in just 20 minutes. Sabalenka hit only 3 winners in the set compared to 12 in the first set, while her unforced error rate increased to 14 from 9, as her game unravelled.

At the break, Sabalenka called for the trainer though she had not appeared injured. She took an off-court medical time out, returning with a strapping to her right upper thigh.

Barty continued her run in the deciding set as she broke Sabalenka for the fourth service game in a row. Sabalenka, perhaps hampered by her injury, was playing very erratically as she tried and failed to shorten her points, and Barty was soon leading 3-0.

The match was petering out as a competition after a tight first set, with Sabalenka getting increasingly frustrated with herself, and almost in tears. She started her next service game with an ace, produced more from anger than skill, but it made her play better as she held to 30 to finally get a game on board at 1-3.

It was imperative for Ash Barty to try and ignore the emotional drama at other end, but it seemed to affect her concentration. Too many second serves from her in the following game, coupled with a few errors, had her facing two break points at 15-40. Thus, the momentum shifted once more as Sabalenka took the second when Barty put a forehand into net. Aryna Sabalenka was back in it and the match had come alive again.

Admirably, Ash Barty was not disheartened and created a further two break point chances in Sabalenka’s next service game. Feeling forced to go big, Sabalenka double faulted to give the break straight back, making it 4-2 to Barty.

Still there was another twist to come in this match of ebbs and flows, as Sabalenka fought back in the next game to get a break point chance. Alas, her forehand went just long to make it deuce. Barty, though, had lost rhythm on her serve, showing too many second serves to her opponent, and Sabalenka would get another chance.

However, a gutsy second serve right into the corner drew an error from Sabalenka and made it deuce for the second time. Some power hitting from Sabalenka gave her a third break point, but a good first serve when she needed it enabled Barty to come forward and hit a volley winner for another deuce.

This was turning into a vital game with Sabalenka’s bold attack being countered by Barty’s dogged defence. Sabalenka kept the pressure up with some good ball striking and a fantastic smash, but eventually, after numerous deuces, some clever defensive slices from Barty finally got her out of trouble. It was a pivotal hold to maintain her lead at 5-2.

Sabalenka then held, to make Barty serve it out for the title. Barty made no mistake on serve this time, racing to 40-0 and three championship points. She took it on the second match point as Sabalenka dumped her return into the net.

The title is Ash Barty’s second on clay, to add to her 2019 French Open success.

She then returned to court to win the doubles final with her American partner, Jennifer Brady, against the no.1 seeds, USA’s Desirae Krawczyk and Bethanie Mattek-Sands, on a champions tie-break. They won 6-4, 5-7, 10-5 to give the versatile Barty a double title triumph. 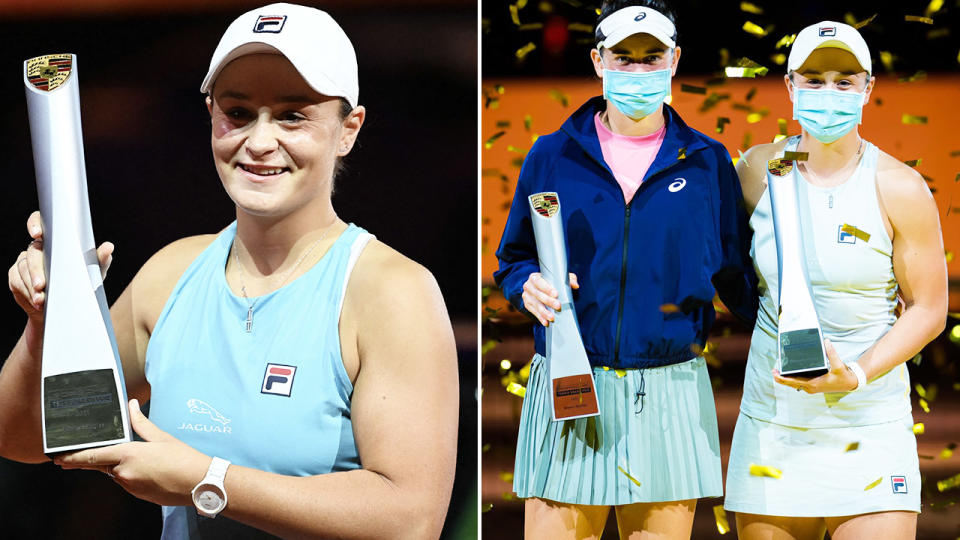