The 2022 FIFA World Cup takes place in Qatar at the end of 2022 in what will be the first-ever World Cup to be staged in the winter months, largely because it would be too hot in the summer months in Qatar to host one, so with the temperatures lower, although still warm for most of us, in Qatar in November/December the tournament will take place then, so it will be a world cup like no other.

The tournament begins on Monday 21st November 2022 at the Al Bayt Stadium in Dakhira and ends at the Lusail Stadium, Al Daayen on Sunday 18th December 2022 for the Final, so it will be a festive end to the competition as well, very unique.

The Qualifiers for the European Nations begin on Wednesday with twelve games across five Groups, lets see how those games went…

European Champions Portugal dominated their match against Azerbaijan in Turin but had to settle for just one goal as they did manage to pick up the three points after the visiting keeper punched a cross against his skipper Medvedev’s head and into the goal eight minutes before the break, whilst Ireland fell to defeat in Serbia after Fulham striker Mitrovic netted two from the bench.

Browne had put the Irish ahead but Vlahovic levelled just before half time, then Mitrovic lofted over Travers brilliantly to put Serbia ahead before heading home to increase the home sides lead, Collins tapped home a Long cross late on after a slip at the back from the home side, but the Serbians held on to take the points.

Bosnia needed an 85th-minute equaliser to deny Finland the win, Pjanic had netted ten minutes after the break, following up his own penalty to net a rebound, but Norwich striker Pukki then netted twice to give the hosts the lead, but Stevanovic levelled with five minutes left to salvage a point, whilst World Champions France was held in Paris by Ukraine in a very surprising scoreline.

France had thrashed the same opponents 7-1 in October, but six months is a long time in football, the hosts took the lead from a spectacular strike from Griezmann, but Ukraine was to pick up a superb point when a shot hit defender KImpembe and rolled into the far corner just before the hour mark.

Number One ranked side in the world Belgium had to come from behind to see off a spirited Wales side, a beautiful team goal finished by Wilson after ten minutes gave the Welsh a shock lead, but De Bruyne had the Belgians level twelve minutes later before brother of Eden Hazard, Thorgan, gave the hosts the lead just before the half hour mark.

Wales were bright in the second period but then conceded a penalty with seventeen minutes remaining, and Lukaku netted his first goal against Wales by converting the penalty and sealing the points, whilst in Tallinn The Czechs netted six thanks to a hat-trick from West Ham’s very own Soucek.

Estonia took a shock lead but that was as good as it got for the hosts as after Schick had levelled and Barak had then given the visitors the lead, Soucek, who had only managed four international goals prior to this one, netted a sixteen-minute hat-trick either side of the break as the Czech’s ran away with it, Jankto then added a sixth and although Anier then netted a late second for Estonia, they were well beaten here.

Norway cruised to the points in Gibraltar with the only shock in this one being that Haaland didn’t manage to find the net, the hosts managed to hold out for 43 minutes but once Sorloth broke the deadlock, they quickly added a second through Thorstvedt, son of ex-Spurs keeper Erik of course, right on half time.

And Svensson then added a third twelve minutes into the second period although a worry for Arsenal fans as Odegaard limped off during the second period so they will hope it’s not to serious, whilst in Riga Montenegro came from behind to win thanks to a brace from Jovetic. Ikaunieks had given the hosts the lead five minutes before the break but that lead lasted barely a minute before Jovetic’s second with seven minutes to go handed the visitors the lead.

And a hat-trick from 35-year-old Turkish skipper Yilmaz handed Turkey a big home win over The Dutch, Yilmaz deflected effort gave the hosts the lead before his penalty had them two up at the break, a brilliant third from Calhanoglu seemingly had Turkey cruising to victory, but then Klassen and the de Jong pulled Holland right back into the contest. But a brilliant free-kick from the skipper sealed the home side the points and a notable win over the Dutch.

Cyprus and Slovakia played out a less than memorable goalless draw, but both sides do grab a point nonetheless, whilst Russia needed a late Sobolev goal to finally seal the points in Malta, Dzyuba, famous for netting a hat-trick in the opening game in the last world cup in his homeland, opened the scoring here midway through the half, before Figueira Fernandes doubled that advantage ten minutes before the break.

Malta though gave the Russians a scare when Mbong pulled one back early in the second half, but Sobolev’s late third ensured Russia took the spoils, and 2018 runners up Croatia fell to defeat in their opening qualifier at the hands of Slovenia in Ljubljana thanks to Lovric’s fifteenth-minute goal which proved enough to hand the hosts all three points.

So, just the forty goals across the twelve games this evening, not a bad start to the 2022 World Cup European Qualifiers is it? Another thirteen games across the five other groups on Thursday should be fun!!! 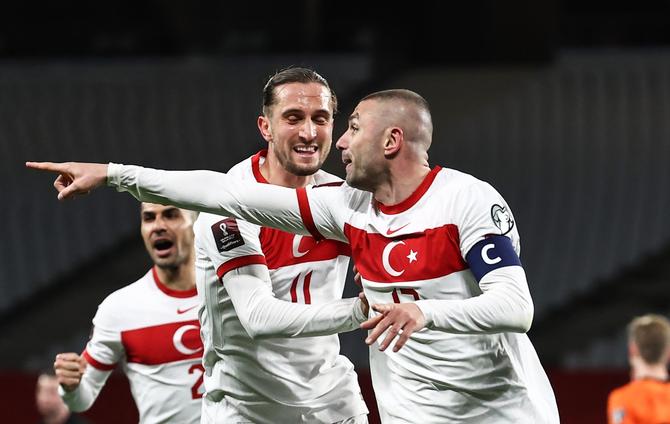