Real Madrid has won their fifth Champions League in eight years – an outstanding result. But the rest of the Spanish clubs are also good – since 2002, they have won all (!) European Cup finals against non-Spanish clubs. They have accumulated as many as 17 such matches in 20 years.

And only when two Spanish clubs meet in the final, one still has to lose. An example is UEFA Cup Final 2007 when Sevilla snatched the trophy from Espanyol in a penalty shoot-out. Or the 2011/12 season, when Atlético de Madrid and Athletic Bilbao played in the Europa League final. And do not forget that twice Real Madrid and Atlético de Madrid played in the UEFA Champions League final. An interesting statistic not only for soccer fans, but also for NBA viewers who like to do basketball odds comparison and keep an eye on the success of teams in other sports.

ALSO READ:  Every Premier League Team’s Player of the Season

The last time a La Liga club lost to a team from another country in the final of a major tournament was in 2001: then Alaves lost to Liverpool 4-5 in the UEFA Cup and Valencia lost to Bayern in a penalty shoot-out in the Champions League final.

Let’s remember some of the other triumphs of Spanish soccer.

Zinédine Zidane’s legendary goal killed off Bayer’s chances of winning any trophy at all. The loss in the final of the Champions League earned the team the nickname “Neverkusen” – that season Bayer also contended for victory in the Bundesliga and the German Cup but did not win anything.

ALSO READ:  Where do Manchester United need to strengthen?

In 2000 and 2001 Valencia played in the UEFA Champions League finals under the guidance of Hector Cuper, both times losing. Rafael Benitez joined the club after the Argentinian coach and won the UEFA Cup three years later – thanks to goals from Vicente and Mista, Marseille were beaten.

In their first season under Pep Guardiola, Barcelona won all the tournaments in which they played. The Champions League was no exception – goals from Samuel Eto’o and Leo Messi earned the Catalans a comfortable win in the final against Manchester United.

The 2013/14 season began Sevilla’s outstanding streak, which included three Europa League victories. In the first final, it was not easy to beat Benfica – the Andalusians only achieved the desired result in the penalty shoot-out.

Salah’s injury and two mistakes by Karius meant Liverpool had no real chance. Real Madrid, on the other hand, won a third straight Champions Cup.

Real Madrid had one of the toughest playoff schedules in the history of the Champions League, beating PSG, Chelsea and Man City on their way to the final. Victory over Liverpool was the logical conclusion of an impressive run. 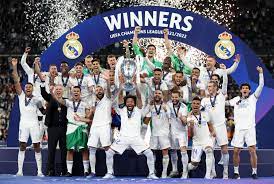