Two months after the finish of the NBA’s restart season in Orlando, another NBA season is right around the corner, and rightfully so. It will truly be the most wonderful time of the year in so many ways for basketball fans, as the 2020-21 NBA season will commence on December 22.

All 30 teams, including the ones that participated in the aforementioned NBA restart, look to make a big impression during the 72 game season, leading up to the Finals in June. Following on from the Central Division preview, we continue onward as we take a look at the Northwest Division.

The Minnesota Timberwolves were more than fortunate to have the number one draft pick in the draft lottery, which led them to select Anthony Edwards from Georgia. Despite having a dismal campaign last season, the future is starting to look bright for the Wolves. Ricky Rubio, who once played for Minnesota when he was a rookie, has returned back to the team and most likely form a backcourt duo with D’Angelo Russell or coming off the bench.

Minnesota would also acquire Juancho Hernangomez and Ed Davis during the free agency period. This upcoming season will also be a challenge for Karl-Anthony Towns, both professionally and personally. I expect Towns to become not only an emotional leader on the court for Minnesota but to also insert himself into the MVP race this upcoming season. This will be the season that tests the resolve of the Wolves, even more so, trying to reach the playoffs in a highly-competitive Western Conference.

During the free agency period, perhaps there was no team busier than the Oklahoma City Thunder. OKC traded Chris Paul to the Phoenix Suns for Kelly Oubre Jr., Ty Jerome, Jalen Lecque, and a 2022 first-round draft pick, however, Oubre would be sent to the Golden State Warriors and Lecque to the Indiana Pacers. The Thunder didn’t stop there, as they would also acquire Trevor Ariza, T.J. Leaf, Justin Jackson, and Darius Miller.

In the NBA Draft, they would draft Immanuel Quickley from Kentucky (only to send him to the New York Knicks) and Cassius Winston from Michigan State. They would also receive Theo Maledon, a point guard from France who was drafted by the Philadelphia 76ers.

Oklahoma City may have done a lot of manoeuvring during the offseason, but it will translate to something more once the season commences? In the grand scheme of things for Oklahoma City, it does. They have a few players on their roster that they could look to trade away once the midseason trade deadline happens, but they would possibly be looking to get some trade picks and a valuable key rotation player. Another project for OKC is the evolution of Shai Gilgeous-Alexander.

Gilgeous-Alexander was impressive during his time in the NBA restart, improving on his stats from when he once played for the Los Angeles Clippers. Entering his third season, Gilgeous-Alexander looks to take the next step further into becoming the team’s leader. Oklahoma City probably won’t make the offseason, but if they can build Gilgeous-Alexander and build around him, the Thunder will have another franchise player and can contend for many years to come.

Is it safe to say that the Denver Nuggets are elite contenders in the Western Conference? After a remarkable and inspiring playoff run where they came back from 3-1 setbacks against the Utah Jazz and Los Angeles Clippers in the playoffs, only to fall in five games against the eventual champion Los Angeles Lakers, Denver should be seen as a team that can make another deep postseason run. Nikola Jokic is one of the best centers in the league and Jamal Murray looks to take his game to an all-star caliber level, especially after his 50 point performance in the Jazz-Nuggets playoff series last season.

Denver really surprised a lot of fans last season, but that really isn’t what they’re looking for. The Nuggets want to beat the best competition in the West, which includes the Lakers, plus divisional rivals, the Utah Jazz and the Portland Trail Blazers. In the NBA draft, Denver selected Zeke Nnaji from the University of Arizona and RJ Hampton, who was originally drafted by the Milwaukee Bucks.

The Nuggets look primed to make another deep postseason run, and with the upcoming season now with all 30 teams looking to do the same in a reasonable 72 game contest, the challenge is right up Denver’s alley and more.

While on the subject of Western Conference contenders, the Utah Jazz also looked to make a solid postseason run if it weren’t for the aforementioned Nuggets. They held a 3-1 advantage over Denver in the first round of the playoffs, only to lose all momentum.

Yes, they still have Donovan Mitchell, Mike Conley, and Rudy Gobert, but they’ll need another player or two elevate to the maximum, perhaps the likes of Joe Ingles and Jordan Clarkson to improve from last season.

Though the Jazz stood pat in during the free agency market, they did, however,  select Udoka Azubuike from Kansas and Elijah Hughes, who was originally drafted by the New Orleans Pelicans. Much like the Denver Nuggets, the Jazz are looking to make a deep postseason run of their own, however, they would like to run it back against the Nuggets, should they ever meet in the postseason again, if possible.

The Portland Trail Blazers were eliminated in the second round of the playoffs at the hands of the aforementioned Lakers, but one has to think about how much time Portland has left before their window of contenders will close. The Blazers have a high-scoring trio of Damian Lillard, CJ McCollum, and Carmelo Anthony, but the one thing they’ll need to give them some layer of depth is defense, and that’s where Enes Kanter comes in. Kanter can help the Blazers in the rebounding department, especially on defense.

Should Portland play the big man lineup, it could be effective in their defense and rebounding. In the NBA draft, Portland selected Isaiah Stewart from Washington, only to send him to the Detroit Pistons, and CJ Elleby from Washington State. Portland looks to make it back to the playoffs, but the competition in the West will challenge them even further.

The Northwest Division will be the most competitive division in the entire Western Conference, if not the entire league. Denver and Utah will certainly be the two teams to watch as they try to outmatch the other all season. Minnesota will be a team that many will sympathize with, given what Towns has gone through, and will look to become more than just a feel-good story of a team.

Portland will certainly do what they can to keep their contenders’ window open, leading up to the playoff chase and the postseason itself. Oklahoma City will begin their Shai Gilgeous-Alexander project while looking for opportunities to make some headway during the midseason trade deadline. 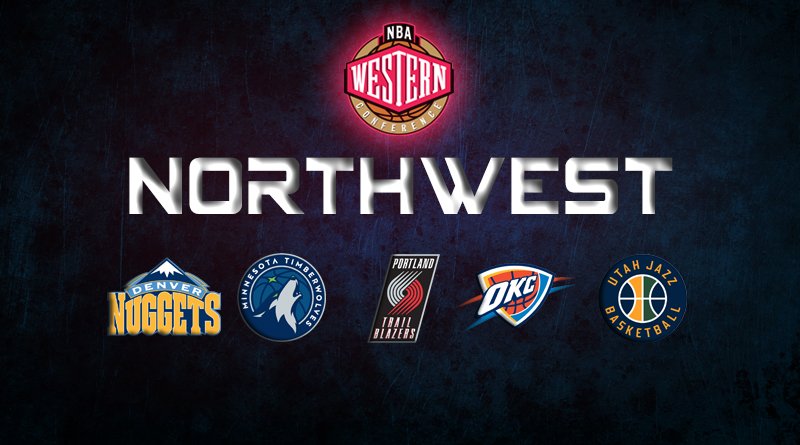