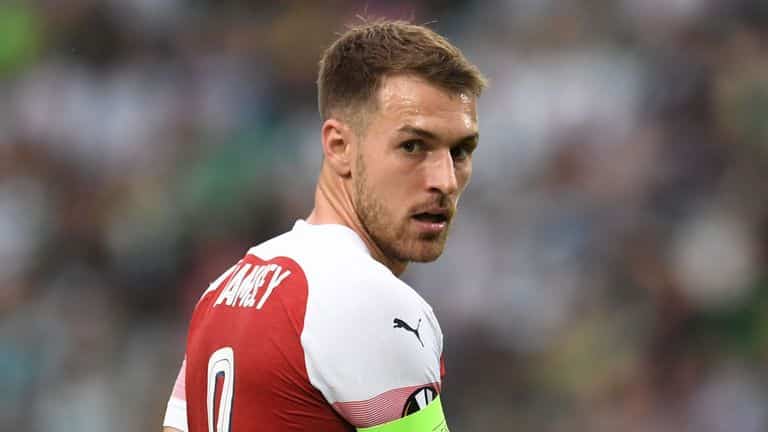 Following a rollercoaster 11 seasons at Arsenal, Aaron Ramsey will be leaving the club to join Italian giants Juventus in the summer.

The 28-year-old has featured in all but three games this season under new manager Unai Emery, but will be out of contract come May.

The Italian champions will reportedly pay £140,000-per-week, just over £7million per season.

Ramsey has had a modest Premier League season so far, albeit in an reduced role, having come off the bench in half of the games he’s featured in.

With two goals and six assists in limited minutes, it could be argued that Ramsey still has the potential to star in the Arsenal midfield, but with Granit Xhaka seemingly irreplaceable and Lucas Torreira quickly becoming a fan-favorite, there’s not much room to spare.

But with rumors of Denis Suarez and Ever Banega poised to join Arsenal during the January transfer window, it’s possible that Ramsey simply doesn’t fit into the future plans of Emery.

The Spaniard seems content with keeping Ramsey as a rotation player for the remainder of the Premier League season, with the midfielder featuring prominently in Arsenal’s FA Cup run.

“It’s an individual situation rather than the team. My idea and focus, I say to him every day, is that we need his performance for us. In the last match I was very happy with him. I asked in the last match at Blackpool if he is okay to help us play and he said, ‘Yeah, coach, I want to play” and he played with a very big behaviour and commitment to us.

“After, his future belongs to him, his family and agent. Every day he’s here with us, he’s working very well. I want his behaviour and his focus to be on West Ham on Saturday.”

When pushed on the matter further, Emery deflected but remained professional.

“I respect his decision a lot…I cannot say more about his situation. The most important thing is that Aaron Ramsey is with us. His future I respect a lot because he has a very private decision but he is with us every day, and I repeat that I am very happy with him.”

Juventus are already one of the deepest teams in Europe and the addition of Ramsey will shore up an already star-studded midfield featuring Miralem Pjanic, Emre Can and starlet Rodrigo Bentancur.

With the Serie A champions still searching for their first Champions League title 1996, Ramsey will likely feature regularly in the league while Pjanic, Dybala and others are saved for bigger clashes across Europe.

The mifielder had a stand-out 2013/14 season, scoring 16 goals and picking up 10 assists in 34 appearances across all competitions.

He was instrumental in guiding Arsenal to multiple FA Cup triumphs, including scoring the winning goal in the 2014 comeback against Hull City.

The Welshman’s early career with the Gunners was riddled with injuries, including a shocking challenge from Ryan Shawcross which broke Ramsey’s leg.

The double fracture would sideline him for 248 days, forcing him to miss 29 games in the process.

With Mesut Ozil also failing to break into the starting eleven, it’s clear that Unai Emery’s style of play has had a major impact on the personnel at Arsenal.

After also losing Jack Wilshere prior to the Premier League season, the Spaniard has Denis Suarez on his radar, however Barcelona coach Ernesto Valverde is hesitant to release the 25-year-old as he spoke with Diario Sport.

“Denis can play for us in any match and he is always available. The reality is he was with our squad when we went to Getafe on Sunday and he is always competing to be in the squad, so yes he does have a future.

“This is a period of the season when fixtures come thick and fast and we will need to make rotations, I am aware of this and so are the players. Every game now we believe there will be a few changes, between league fixtures and those in the Copa all players available have a chance.”

Let me know your thoughts on the move on Twitter!

has published a new post."Five Spots Amari Cooper Could Land in Free Agency"
2 hours ago

has published a new post."Double Hattrick or Six-peat?"
11 hours ago