After prevailing over Ten Hag’s in-form United, Arsenal now finds themselves five points clear at the top of the Premier League. However, with half a season yet to go, are they capable of keeping Pep Guardiola’s City at bay?

When the Gunners lost their £ 45 million striker Gabriel Jesus due to a knee injury, which he sustained prior to the World Cup, They had to make do with their substitutes. Even though there is still one week left in the Transfer Window, Eddie Nketiah seems to be doing a great job at filling in for the Brazillian centre forward.

And with Bukayo Saka and Martin Ødegaard chipping in at the other end, Arsenal looks like scoring a bagful of goals in every game they play so far.

Another positive for the Gunners is the signing of Leandro Trossard from Brighton & Hove Albion, for £ 26 million, on a long-term contract. The Gunners will be hoping that he adds more depth to their attacking prowess. Trossard made his debut for Arsenal as a substitute for Gabriel Martinelli against United.

Trossard made 116 appearances for Brighton scoring a total of 25 goals.

After the game on Sunday, Arteta praised his side’s character and was geed up for the future of this team.

“They do surprise me with how they react,” “We encourage them to play free-flowing football and there is energy in the team and good things happen. “To do it repeatedly against big teams, the way we played today, gives me a lot of positivity for the future.”It is so tight now in the league, there are such small margins. Winning, losing or drawing, you have to be be conscious of that. “If we can capitalise on the energy, it will be positive.”

What Arteta is showing with Arsenal, is if a Club is prepared to give a young manager time to build his own team and philosophy of playing football, then eventually you can achieve great things.

Of course, it helps to be an assistant to Pep Guardiola at City but to walk into a team who was still jaded from the long Arsene Wenger era and to have turned things around in just three years, takes some doing.

Let’s also not forget that the Gunners also saw a place in the Champions League slip away from them at the last hurdle in 2021-22, so to withstand that and be five points clear, is a remarkable achievement. Kudos to the owners for keeping faith in the 40-year-old.

A Good Start, But City Hunting Down

Although Arteta’s men can see the title in sites, the defending champions may prove to be a thorn in their way. And with Earling Haaland banging in goals for fun, it’s clear that Guardiola’s side is not willing to give up their title so easily, as was the case when they came back from 2-0 down against Spurs.

And with a player like Haaland banging in goals for fun, anything is possible. Haaland is flying as the Premier League’s top-scorer, with 25 goals in 19 games, and when you have a team like City who is capable of going on a ten-match winning streak, it can be very difficult to keep in touch with them, hence Arsenal’s two fixtures against the champions, may just prove to be the decisive factor of them lifting the Title or not.

The two sides will first meet on Friday, in the fourth round of the FA Cup on Friday, and it will be interesting to see how both teams approach the tie in terms of team selection.

Because of the run that both teams are on, you would probably expect that they will play the same side that started against Wolves and United, but let’s see what happens.

Is this the season for Arsenal?

Send us your opinion on World in Sport. 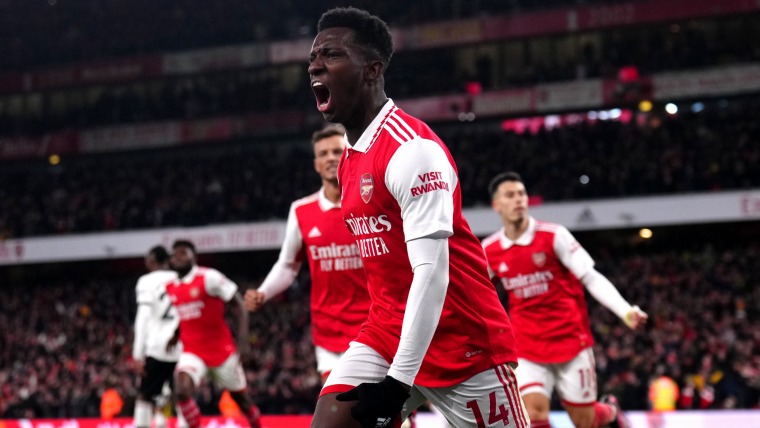