The question coming into this one would be if The Gunners would be able to build on that impressive win over Chelsea on Boxing Day, and after seeing Brighton’s line up minus some big players including Maupay and Welbeck, they must have been boosted no doubt, with Potters changes to his side raising quite a few eyebrows before kick-off.

The hosts though did have the better of the opening half as Arsenal failed to have a shot on target in the entire half, but they were far more positive after the break although Aubameyang, in for Lacazette, should have scored but saw his close-range effort somehow kept out by Sanchez, but midway through the half Lacazette, who had only been on the pitch for 26 seconds, received a pass from Saka, who had made a brilliant run down the right, took a touch and fired past Sanchez superbly, and it proved enough for the visitors to net back to back wins in the league and at least end the year on a high, and go into 2021 in a positive mood after what had been a rather difficult few weeks for Arteta and his men.  A disappointing evening for the hosts though who still have only two wins to their name this season.

This contest was never going to be an entertaining goal-fest let’s be honest, and sure enough, it was one goal that decided this contest at Turf Moor, and it was the hosts who grabbed it just past the half-hour mark when Mee rose to head home a corner.

Barnes had gone close in the opening minute for the hosts but saw his effort brilliantly saved by Ramsdale, and just before Burnley scored, The Blades saw a header blocked on the line by Brownhill, although it was close to hitting his arm, although Wilder was unhappy as he said it did hit his arm, although VAR disagreed.  Fine margins, and one that the visitors seem to be the wrong side of at the moment as their record-breaking start to a top-flight season (for the wrong reasons) continued, no win in their opening sixteen games, and now eleven points from safety.  Big win for the hosts though and they now have a five-point cushion between them and the drop zone now.

The Saints were without their charismatic manager Hasenhüttl after he was forced to isolate due to Covid reasons, so would this affect the hosts at all?  Well, it did not seem to as they made a very fast start in this one and thought they had taken an early lead when Ings produced a neat finish after getting past a defender, but the flag then went up to thwart the hosts after Adams had been offside in the build-up, so no goal.  West Ham, for all their defending and lack of possession, did have a good chance but headed straight at McCarthy just before half time, and after the break, McCarthy again produced a brilliant stop to deny the visitors, however, apart from these changes, it was the Saints who did most of the pressing in this one, but they found a resolute Hammers backline impenetrable and managed to hold on for a useful point against a side who have been playing well this season. Two goalless draws for the Saints in a row now, they will want to make sure that 2021 begins with a victory no doubt.

Could Big Sam and his Baggies build on that superb point at Anfield last time out?  They were up against a very attack-minded Leeds outfit so no doubt would have to defend very well again to have any chance of pulling off a positive result in this one.  Nine minutes in and disaster for the hosts as they literally gift-wrapped Leeds their opener, after Sawyers turned and without looking sent a pass back to his own goal expecting keeper Johnson to be standing there, but he was not as Johnson was to the left of his goal, and the ball simply went into the unguarded net, an absolute horror show, and one the hosts never recovered from.

Leeds simply blew their opponents away and made it two just past the half-hour mark when Alioski drove a superb effort in off the post, and then it was three nine minutes before the break when lovely play between Harrison and Bamford saw the former get into the box and fire into the top corner.  And a fourth came five minutes before half time as Rodrigo saw his effort deflect off O’Shea and past Johnson, and the hosts looked shell shocked and left Big Sam needing a magic wand and a miracle.

Leeds did add a superb fifth eighteen minutes from time when more sensational play from Bielsa’s men ended with Raphinha cutting side and firing a wonderful effort into the top corner, it had been a superb performance from the visitors and left the hosts on their knees and ending the year very badly indeed. Leeds had simply blown away a side who had held the champions just two days earlier, madness.

Onto the evening game now, and Old Trafford for Wolves visit to Man United, with the hosts knowing victory would send them into second behind Liverpool…

United made six changes to the side who drew at Leicester, bringing in the likes of Pogba and Cavani, whilst Wolves made four changes from the side who held Spurs at Molineux, and it was clear to see the visitors game plan, be tight defensively and hit the hosts on the break when they could.  It was, therefore, the first half of limited goal action as a result, with United’s only shot on the target being a very good chance to score, but Fernandes could only volley straight at Patricio from point-blank range.

Wolves did have a couple of moments, both coming from centre half Saiss, who netted the leveller against Spurs two days ago, as he saw a looping header come off the top of the bar, and then a flick at goal being well saved by De Gea.  The second period did not really see much in the way of goalmouth action either, although with twenty minutes remaining came a VAR decision when a header at the visitor’s goal hit the hand of Coady before bouncing through to Cavani who swept home.

Cavani was definitely offside though, but was it handball against Coady, well both decisions went in favour of the Gold and Black army, and a free-kick to Wolves followed. It probably was the right call too.  Saiss then saw a header tipped over by De Gea, although the flag then went up, as the game threatened to finally come to life, but as the game got closer to the end United had most of the possession but try as they might, they came up against a solid Wolves defence who would not budge.

However, three minutes into five added on minutes United found the winner, as a long ball saw Rashford run onto it, come back inside and fire at goal, seeing it take a deflection off Saiss, who had been superb all evening, and beat Patricio and end up in the corner of the net.  It was so cruel on the visitors and especially Saiss, who was MOTM for sure, but a late cruel twist meant Wolves ended up with nothing and Man United had the points and second place in the standings.

This is how the table looked after this evening’s matchups… 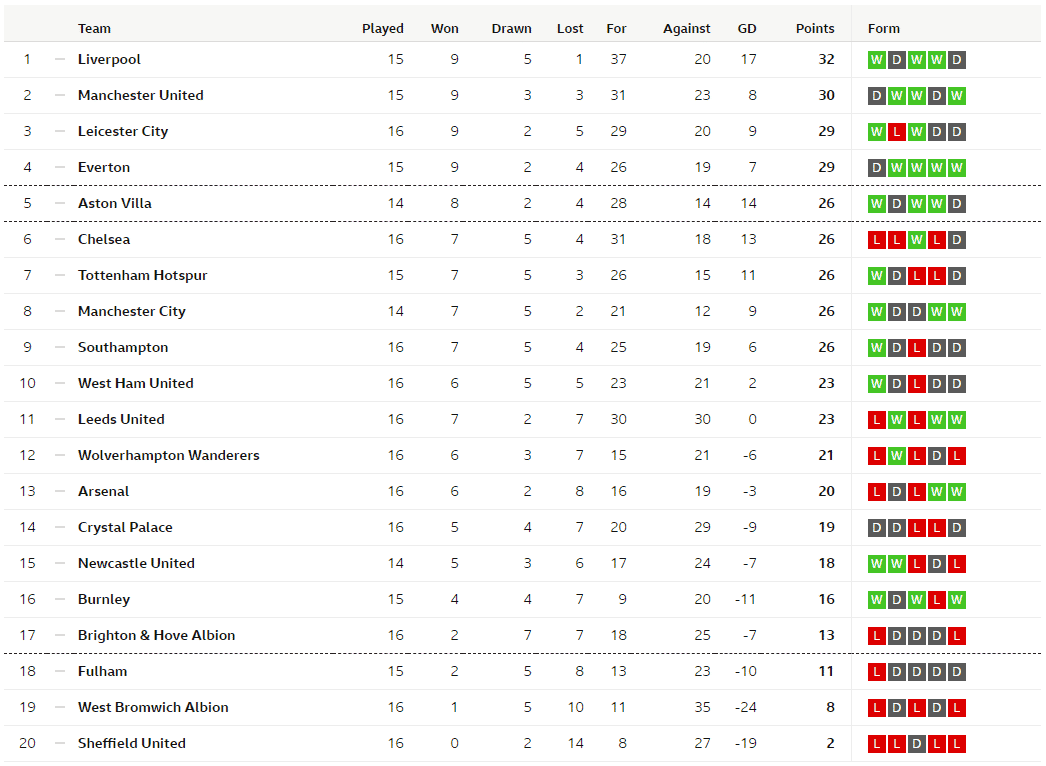 Man United’s late winner sees them two points behind Liverpool now, Wolves remain in 12th, Arsenal’s back to back wins over Chelsea and now Brighton have put them just six points off a European spot, and nine points above the drop zone, Brighton themselves are just two points above the danger zone themselves still and have played a game more than Fulham who plays Spurs tomorrow.

Burnley have put daylight between themselves and the bottom three, whilst The Blades look desperate right now.  Southampton, who could have gone into the top four with a win this evening, stay ninth, a place above their opponents who remain tenth, and Leeds five star performance at The Hawthorns sees them 11th and only three points off fifth, whilst The Baggies remain five points from safety.

Tomorrow sees the final two games of 2020, and these are those below…

Spurs can go into third place with victory over Fulham, whilst a shock win for The Cottagers would see them climb out of the bottom three at the expense of Brighton.  And Victory for Liverpool at St James Park would see them open up a five-point cushion over the rest, whereas a surprise win for The Toon would see them rise up three places to 12th and only five points off a European spot.  Should be two decent encounters to end the year… 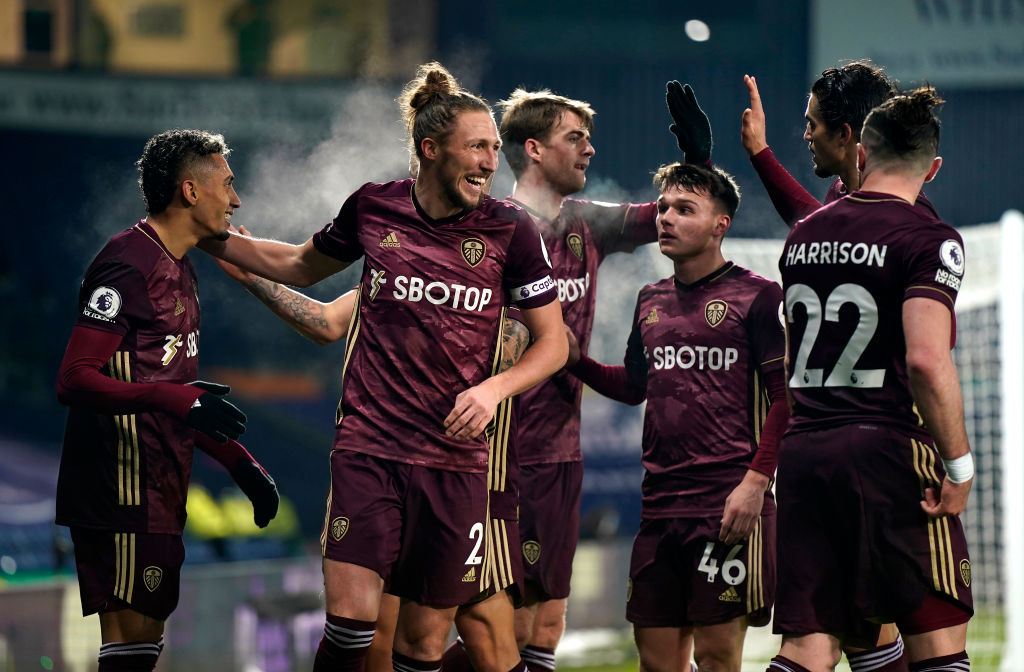