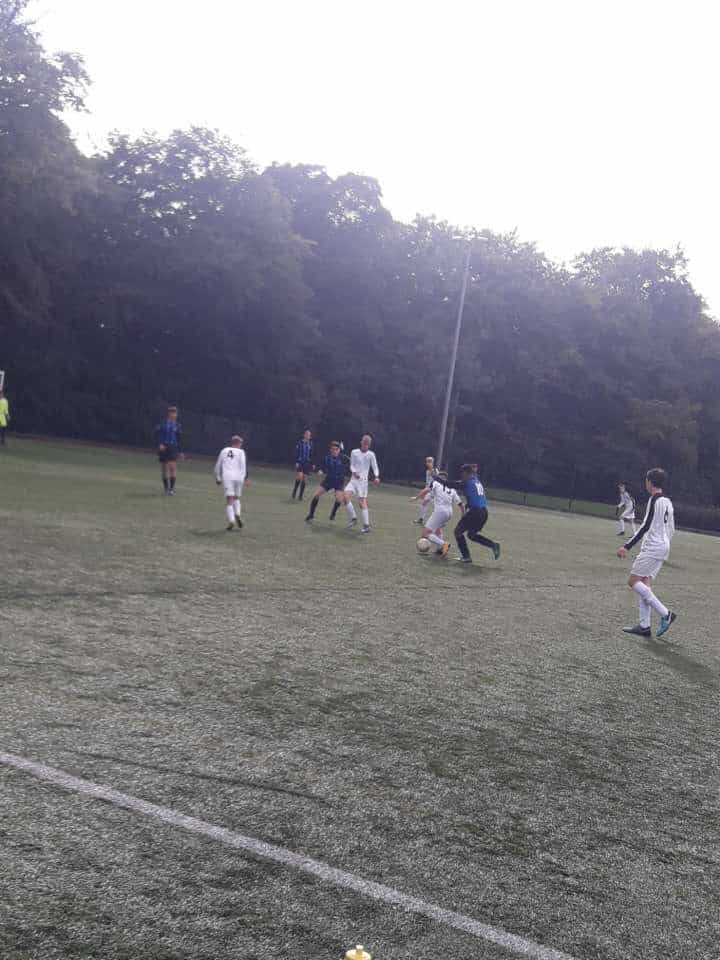 Blackhall Athletic were knocked out of the Craig Gowans Memorial Cup in the first round after narrowly being beaten 3-2 by AC Oxgangs. Craig Stewart made his long awaited return from injury, and Thomas Hedges was named captain for the day. Nathan Gallagher was unavailable, which allowed Craig to start the game at Left Wing.

Oxgangs started the game brightly and could have been ahead after just a minute, when their number 11 was played through from a poor pass back, but hit his shot just wide of the post. Oxgangs came forward again, this time number 17 was put clean on goal after a good pass from number 7, but he passed up the opportunity to give his side the lead. Jamie Campbell then had a pot shot for Blackhall, which sailed high and wide of the bar, before the Oxgangs number 11 again found himself clean through, but his shot flew wide of the goal. Jamie then made an incredible interception when the number 7 looked certain to score, and then gave the ball to Brandon who led the counter attack for Blackhall. The striker sent his strike partner Zane clean through, but Zane could only force a corner out of the situation. From the resulting corner a goalmouth scramble ensued, but Oxgangs were able to hammer the ball to safety. Oxgangs came forward again, but Thomas Palmer won the ball and gave it to Brandon who spearheaded another counter attack for Blackhall, he drove at the defence and then rolled the ball to Zane, who coolly slotted the ball into the back of the net to put Blackhall 1-0 up. Just a minute later Blackhall doubled their lead when Calvin Catala struck an absolute worldy from 25 yards out, right into the top left corner of the goal to put Blackhall 2 goals to the good.

Oxgangs would not lie down, and their number 9 was given a guilt edged opportunity to pull one back for the away team after being sent clean through, but he dragged his shot miles wide of the goal, much to the relief of the Blackhall defence. The away side did eventually pull one goal back, as the defence let their man go, and number 11 was able to poke the ball in to half the deficit. Dugald Williams saved Blackhall from being pegged back shortly after, when number 9 was again advancing towards goal, but Dugald was able to nip in ahead of the striker and hammer the ball away for a corner. Substitutions were then made, with Gregor Rolland being brought on for Dugald, and Fallilou coming off for Michael. After just coming on Michael had let his man go, but the Oxgangs number 11 wasted the chance to make it 2-2. Calvin Catala and Jamie Campbell had again formed their formidable midfield partnership, but Calvin was then replaced by Khadime after another fantastic performance. Oxgangs came forward again, but this time Thomas Hedges was on hand to clear any threats to the goal. Blackhall then made yet another substitution, as Brandon was taken off for Alex Shanks, who had an almost instant impact, smashing a shot goal bound which was well saved by the keeper. From the corner Thomas Hedges sent a looping header towards the goal, but the keeper was able to catch it easily. That would be the last action of the half, as Blackhall went in 2-1 up at the break.

Blackhall began the second half brightly, with Michael hitting a hopeful shot from about 30 yards out, which was easy for the Oxgangs keeper to collect. Jamie Campbell then brilliantly won a free kick just outside the box, with his fancy footwork forcing his opposite number into a foul. Zane took the free kick, which was deflected out for a corner. From the corner the ball fell to Nathan Pearse, who put his shot just wide. Blackhall began to really dominate the game, and every player looked comfortable in possession. Calvin Catala was brought on for Jamie Campbell to add some more strength to the midfield. Alex Shanks then fizzed a hopeful shot harmlessly over the bar, before Khadime was brought off after a solid display, being replaced by Dugald. Blackhall keeper Finn was then forced into his first save of the half, as he easily dealt with a shot from distance, palming it out for a corner. From the corner Oxgangs must have thought they had scored, but the header was miraculously blocked on the line and then thrashed away to safety. Dugald then ran at the defence, and was fouled right on the edge of the box on the left, many thought it was a penalty but the referee was adamant it was a free kick. Nathan Pearse then crashed his shot from the free kick right against the bar, and Oxgangs scrambled it to safety, but Blackhall should have been out of sight. Nathan was again causing problems as Craig Stewart played a brilliant through ball for Nathan, who somehow missed from inside the box, throwing away the chance to make it 3-1. This would be the wingers last action of the match, as he was replaced by Fallilou, and Craig came off for Jamie. Just as Blackhall looked to be in complete control of the game, disaster struck. Oxgangs’ number 10 worked himself some space brilliantly in the box, and then finished well, placing the ball beyond a helpless Finn in goals, to level the scores at 2-2. Blackhall heads went down, and Oxgangs had the momentum. Within minutes of making it 2-2 Oxgangs had completed their remarkable comeback when the number 10 was the recipient of an inviting low cross, which he tapped in to make the score 2-3. Gregor Rolland was then brought off after a solid performance at right back which did not go unnoticed by the bench, as he was applauded when he was coming off. He was replaced by Khadime, who moved into the centre of the park, pushing Dugald into his natural right back position. Fallilou then hit a shot which was easily saved by the keeper. The ball found its way to Fallilou again, but he smashed it into the keepers arms once more. In a last throw of the dice, Zane was brought on for Alex Shanks, and almost instantly he missed a great chance to force extra time. He was played through exquisitely but his first touch let him down, and his shot was saved and went out for a corner. Calvin found himself in a great position to equalise from the corner, but he sliced his shot wide, and the referee blew his whistle to signal Full Time. Blackhall Athletic 2 – 3 Oxgangs