Brad Keselowski won a wild wreck filled race at Talladega Superspeedway.Keselowski took the outside line on a restart with three laps left, and Busch never really had enough to get to him to make a serious run.Keselowski was able to stay out of trouble Sunday,his car arriving in victory lane,relatively unscathed. The second restrictor-plate race of the season had a number of multi-car wreck’s including 12- and 21-car accidents and a seven-car crash on the last lap just as Keselowski crossed the finish line.

Late in the race Matt Kenseth was thrown skywards and flipped into the infield barrier after contact with Danica Patrick, who took a hard hit into the wall from Micheal McDowell and ended up collecting Joey Logano and Kevin Harvick along with her.Only 21 of the 40 cars finished on the lead lap, and 12 cars were ruled out of the race.The first caution of the day occurred when Dale Earnhardt Jr was spun across into teammate Kasey Kahne, after making adjustments to his car on pit road which made his car loose in the dirty air.

“Some people took it over the edge.”

“None of the accidents today were at the front,” Keselowski said. “That’s your highest percentage shot, if you can run up front. It sounds real easy, it’s not, otherwise everybody would do it.

“We were fortunate to be second, third or better in every one of those accidents.”

Chase Elliott won his second career Sprint Cup Series pole by taking the top spot in qualifying at Talladega Superspeedway.Elliott turned a lap at 192.661 mph in Saturday qualifying to put his Hendrick Motorsports Chevrolet in the top position. His father, Bill, won the pole for this race 30 years previously with a lap at 212.229 mph. 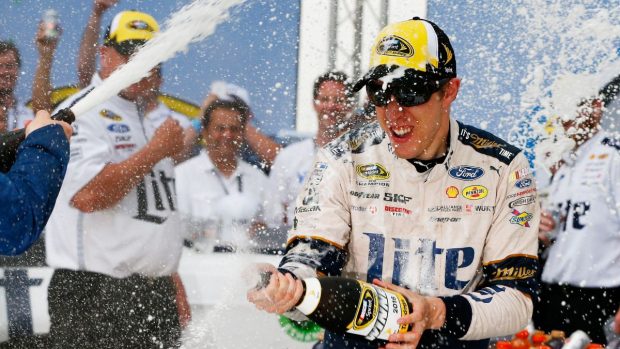