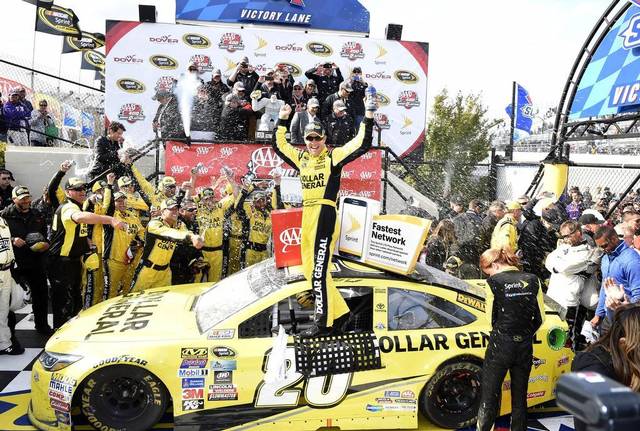 Matt Kenseth  charged his way to victory Sunday afternoon at Dover International, holding off a surging Kyle Larson to score his first win of the season in the Sprint Cup series. With just a handful of laps to go, Larson looked to have the better car. It seemed only to be a matter of time before he would overtake Kenseth. Larson bumped Kenseth slightly, moved to the inside and raced side by side. With four laps to go, it looked like it would only be a few laps before he took the lead from Kenseth. However as they entered the final lap, Kenseth seemed to have the momentum needed to seal the win.

Kenseth led 48 of 400 laps. This was also his third win at the Monster Mile and the 37th of his Sprint Cup career.

“It all worked out for us, kind of the opposite as I feel like it’s been going the last couple months,” said Kenseth, who has just one other top-five run this year — a fourth place last weekend at Kansas. “We’ve had really fast race cars. We’ve been in position to win a lot. This wasn’t our fastest car by any means. But we were able to be there at the end of the race and pull it off.”

Larson, looking for his first premier-series win, settled for second. He led 85 laps and wound up just .188 seconds behind at the checkered flag after a stirring challenge for the lead down the stretch.Kasey Kahne and Kurt Busch followed Kenseth, Larson and Elliott in the finishing order to round out the top five.

A huge, 18-car crash brought out an extended red flag on Lap 354, eliminating a number of contenders. Johnson was leading in the outside lane as he closed in on the start-finish line.But something broke on his Hendrick Motorsports Chevrolet and it slowed suddenly . Martin Truex Jr. collided with Johnson from behind causing an accordion affect.Among those collected were Kevin Harvick and Martin Truex Jr.

After a stoppage of 11 minutes, 22 seconds, the race restarted on Lap 360, but right on the next restart, contact from Larson’s No. 42 Chevrolet sent Carl Edwards’ spinning hard against the inside wall. That brought out the final restart on Lap 366, with Kenseth and Larson coming to the line side-by-side. On Lap 381, Elliott passed Larson for second but surrendered the position in traffic three laps later.

Harvick had started from the pole position and led a race-high 117 laps, losing ground on a number of early pit stops. “We just keep getting further and further back,” Harvick radioed his Stewart-Haas crew on Lap 172, during the fourth caution period.

Further back there were some damaged cars finishing in the top 10, including Brad Keselowski who finished sixth having led the race at the halfway point. Contact with Austin Dillon damaged the front left of his car severely, meaning he would end up losing a lot of  ground heading into the final round of pit stops.

Denny Hamlin recovered to seventh place having spent the first half of the race a lap down due to ‘improper fuelling’ on his first stop.