Nottingham Forest travelled to manager Mark Warburton’s former club Brentford for their first away game of the new season.

Nottingham Forest fans and players knew that this was going to be a tough away game against a very good footballing side, 1,650 away fans were in attendance to watch Forest win 4-3.

Forest lined up in a 3-5-2 formation with new signings Daryl Murphy and Barrie McKay starting upfront. The Forest back 3 was tested very early on with Brentford breaking through and having chances right from the off. After just six minutes attacking midfielder Florian Josefzoon blazed a shot over the bar, much to Forest’s relief. Brentford continued to attack but were continually wasting chances, until the 38th minute when Florian Josefzoon floated in a cross which was met by the head of central defender Josh Egan who’s header looped over Forest keeper Jordan Smith and into the bottom left corner.

Brentford were in front for only three minutes when the ball was headed straight to Greek midfielder Andreas Bouchalakis following a free kick who then beautifully volleyed the ball into the bottom right corner to bring Forest level. Just 2 minutes after equalizing Forest came forward again, the ball was fed to Tendayi Darikwa who hit the post, but the rebound fell to Daryl Murphy who tapped the ball into the empty net to give Forest the lead going into the break.

Just 2 minutes after half time, Forest had scored again, Bouchalakis doubling his tally for the day with an exquisite long range shot that cannoned past the Brentford goalkeeper and into the bottom right corner of the goal. Forest squandered a golden opportunity to go 4-1 up when Barrie McKay was clean through, but saw his shot saved by goalkeeper David Bentley. Brentford began to get a foothold in the game again and pulled one back after 79 minutes from a simple corner that was turned into the top right corner by the head of Andreas Bjelland, which set Forest up for a nervy end. Attacking midfielder Kieran Dowell was brought on as a substitute and restored Forest’s 2 goal lead with a cool finish in the 83rd minute.

Forest looked set for a 4-2 win but Brentford once again gave themselves a chance in the 92nd minute when attacker Neil Maupay slotted the ball into the bottom right corner from outside the box. Fortunately for Forest there was not enough time for Brentford to come back to level terms when the referee blew his whistle in the 96th minute. 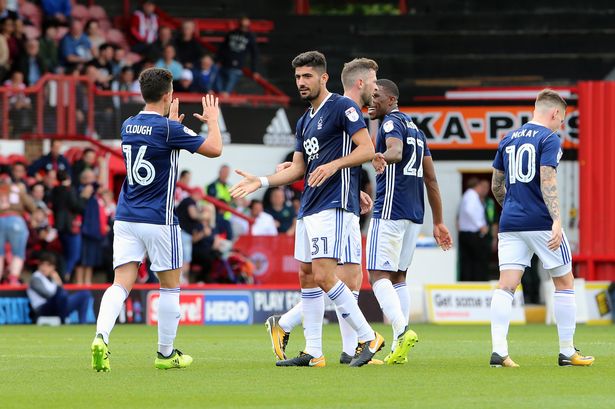