Saul ‘Canelo’ Alvarez realised his dream last night of becoming the first-ever undisputed super-middleweight champion of the world in the four-belt era, and the first Mexican in boxing history to accomplish the feat.

Roared on by a flag-waving vehemently pro-Canelo sellout crowd of 16,586 in the MGM Grand arena in Las Vegas, Nevada, Alvarez dropped Caleb Plant with a barrage of left hooks in the 11th round to put an end to the contest and ensure his position as one of the pound-for-pound all-time greats, and a living legend of the ring.

As the referee, Russell Mora, waved off the fight after 1.05 of the round, Saul Canelo Alvarez mounted the ropes in his corner and took the adulation of the ecstatic crowd. His desire to join the ranks of undisputed boxing royalty was fulfilled. Nobody was going to deny him this moment, and although Caleb Plant came to spoil the party, it was Alvarez who added the final jewel to his undisputed crown by taking his opponent’s IBF title to complete the set and make history.

Canelo had been rattled in the build-up to this fight. His opponent getting under the skin of the Mexican sensation during the first face-off, with jibes about his mother prompting a furious response in which he threw punches, opening a cut under Plant’s left eye. For the normally cool and respectful Alvarez, Plant had ‘crossed the line’

Many expected Alvarez to come out fuelled by the taunts. Pundits worried that making the fight personal might see him recklessly looking for an early finish, leaving himself exposed to an opponent who had notched up 12 of his 21 victories by way of knockout.

Instead, Canelo used the extra spice in the best way, producing a calmly powerful, persistent performance, relentless in rhythm, and ultimately ruthless in execution, walking down his opponent, who was working behind his jab, cycling backward, at every opportunity with hurtful body shots.

The tenacious Plant stuck to his game plan of stick and move, letting his fists go from time to time, as he tried to keep distance, keeping the fight long, always wary of the Mexican’s much-vaunted power. But Alvarez showed little fear of Plant’s own punch power, brushing aside the jabs, and even inviting Plant to hit him as he lay against the ropes with his hands down in the seventh round.

The fight became one-way traffic, and it must have felt a lonely place in that ring for Plant who had never faced a fighter of the calibre of the Mexican before. Alvarez, with the crowd chanting ‘Canelo, Canelo’, continually backed him up, letting his own combinations go, inflicting damage, looking for the stoppage to put the royal seal on his dominant performance.

The end when it came was brutal and unequivocal. Alvarez is one of the best finishers in the business and when he scents blood, there is only one outcome.

As the bell for the 11th championship round sounded, the Mexican moved in for the boxing kill.

A straight right from Canelo, followed by a three-punch combination to the body, had Plant wincing and moving backward. A left hook wobbled the man from Tennessee, and another left hook, right uppercut combination sent him to the canvas for the first time in his career.

The crowd was on their feet, sensing the end was near. Plant beat the count and assured the referee that he could continue, but his face told a different story. Canelo moved in, and a straight right followed by a series of left hooks felled Plant like a chopped-down tree and referee, Russell Mora didn’t bother to count, signaling the fight over to cue scenes of jubilation in the vast arena.

The two fighters embraced after the fight, mutual respect restored. Caleb Plant played his part in the contest. He came to fight, to look for glory, to rise above the demons in his own life, but it was not his night. Destiny was with Saul Canelo Alvarez, the man from Guadalajara, who now wears the undisputed crown, and has written his name into the record books of boxing immortality. 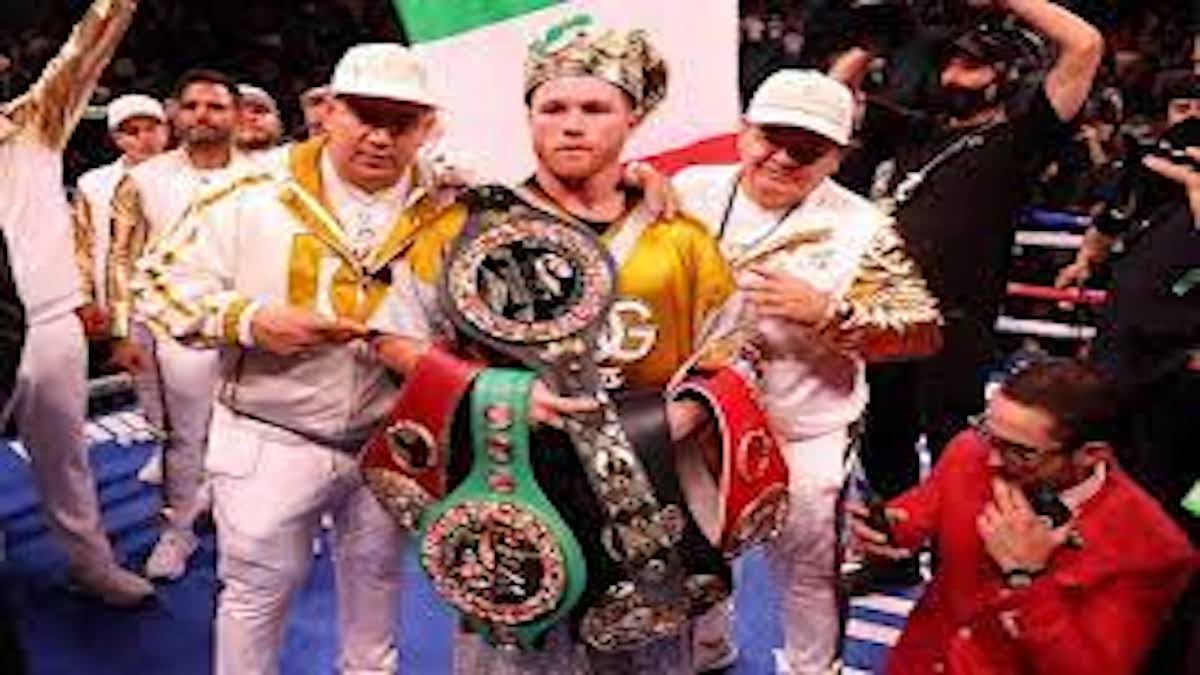